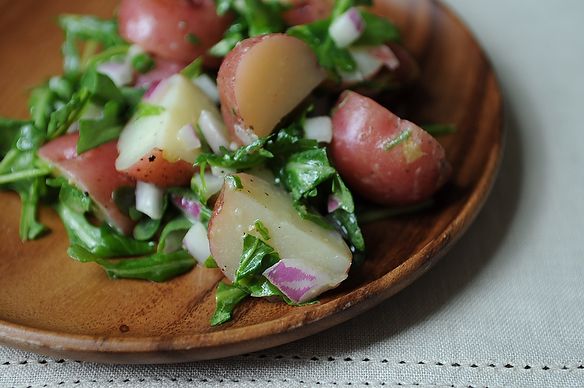 Memorial Day Weekend has come and gone, but barbecue season is here to stay -- at least until September! About ten years ago, I came across a recipe for a grilled potato salad in an issue of Cook's Illustrated. I was intrigued by the grilling technique, and it was the first time I'd made a potato salad with vinaigrette instead of mayonnaise, which was a revelation. The other thing I loved about the recipe was this clever technique: the just-grilled potatoes are tossed first with a little rice vinegar, which absorbs quickly into the warm potatoes, and then with a couple of handfuls of arugula, which wilts gently under their heat.

Over the years, I’ve adapted the recipe, using red wine vinegar for the vinaigrette instead of more rice vinegar, leaving out the chopped bell pepper, substituting red onion for the original shallot, and eventually forgoing the grill. For me, the fresh, bold flavors in the salad are the reason for its success, and I found that grilling the potatoes can distract from this. But by all means use the grill if you’d like -- just blanch the potatoes first, and then finish them on skewers on the grill for a few minutes.

phyllis June 5, 2011
I've been making an older Ina Garten potato salad recipe with Dijon dressing for years. I've adapted it over the years and added and subtracted. Ina uses champagne vinegar but I've also used red wine vinegar and it's delicious. This year, thank you Merrill, I'll throw in some arugula!!

Fairmount_market June 1, 2011
This looks delicious. When I make potatoes for salad Nicoise I toss the hot potatoes in a splash of white vermouth before dressing them with a mustardy, herby vinaigrette: similar idea as the rice wine vinegar here.
Author Comment

Juliette June 1, 2011
This was fantastic. I will be making it all summer long. I threw in a couple of hard boiled eggs - yum.
Author Comment

Hilarybee June 1, 2011
I've made potato salad with a dijon dressing for years, using a pretty old Bobby Flay recipes. I like to grill the potatoes first and then pour the dressing on while they are still warm.
Author Comment

Merrill S. June 2, 2011
Making sure the potatoes are still warm when you add the dressing is key.

TheVealWhisperer May 31, 2011
Beautiful!! Just made this and it was fantastic with grilled meats. It reminds me of an austrian-style potato salad that a local place (Herwig's) serves, except instead of arugula they go heavy on dill and there's a heavy helping of garlic powder and pork fat. This was much lighter; I like both!!
Author Comment

Merrill S. June 2, 2011
So glad you liked it! My husband loves German/Austrian potato salad, so he's a big fan of this as well.