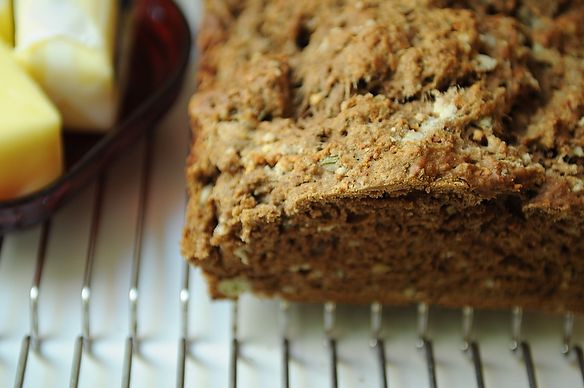 This week, I’m really being lazy. The recipe I’m going to tell you about is not my own -- nor is a recipe of someone else’s I’ve adapted. I hold no claim whatsoever over this recipe. But it is a recipe that deserves to be featured.

Jon is one of our talented engineers, and he is also a great cook. (Not to mention a former CSA site administrator who grows many of his own vegetables and spent 5 months in New Zealand working on organic farms.) A couple of weeks ago, he brought a loaf of his famous beer bread to the office; we’d been hearing about it for a while. Modestly, he insisted that the recipe wasn’t his own, but was barely adapted from a recipe he found on food.com. It turns out he’d made quite a few adaptations -- all of us agreed that this recipe really is his own. After much cajoling, we convinced Jon to add the recipe to the site, and last week we photographed it for your viewing pleasure!

This chewy, dense quick bread has a malty sweetness from the beer (rule of thumb: the more flavorful the beer, the more flavorful the bread) and a rich honey color from the beer and the whole wheat flour, which I highly recommend you use. The sweetness is offset by the addition of nutty Parmesan, garlic and heady rosemary, making it suitable for almost any time of day (okay, maybe not an early morning breakfast). It is heavenly spread with a thick cloak of salted butter, or just as is.

Garlic, Parmesan and Herb Beer Bread
By joninnyc, adapted from Gerald Norman
Makes 1 loaf
See the full recipe (and save and print it) here. 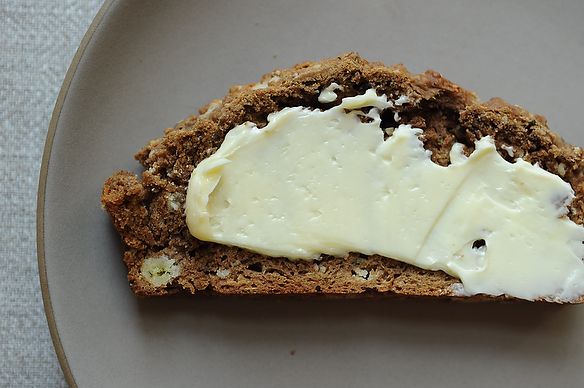 Kristen M. June 8, 2011
This was so good. The darkness of the beer affects the color of the bread a lot. The one pictured above was made with a great dark, earthy beer that went really well with the garlic and parmesan.

EmilyC June 7, 2011
Can't wait to try this recipe. I'll bet a farmhouse ale, like saison dupont, would be nice here because of its carbonation and yeast flavors. (And if you buy a bomber, there will be plenty left to have alongside the bread and butter! ) Seriously, this looks really good and I'm glad you and Merrill shared the recipe.

Amanda H. June 7, 2011
I really loved how much you taste the beer. And there's no better accompaniment than butter and salt!

marynn June 7, 2011
I'm still getting over the Wild Ramp Pesto. Wouldn't some thin slices of this be terrific with a schmear of that? Or, how about inpatskitchen's bar cheese? It will be fun this fall with some veggie chili of vegetable soup.

Jon, don't be shy; after all, you found it, responded to it, and made it your own. I think that's what cooking is all about. Cheers, Merrill, for fronting this.

boulangere June 7, 2011
I noticed this when it was first posted. Thanks for bringing it around again. I think we'll try it tomorrow. Sierra Nevada Pale Ale ok?

joninnyc June 7, 2011
Yep, any beer is ok really. I believe it reacts with the baking powder for the rise. I've had the best results with swill beer (guessing because of the carbonation?)-- Schaeffers, Old Milwaukee, etc.

fiveandspice June 7, 2011
Yum, yum, yum! I love anything with beer in it (hehe) and its utility in cooking so often gets overshadowed by wine. Thanks for sharing Jon!
Author Comment

Midge June 7, 2011
Looks so savory and delicious! Thanks for sharing Jon and Merrill!
Author Comment