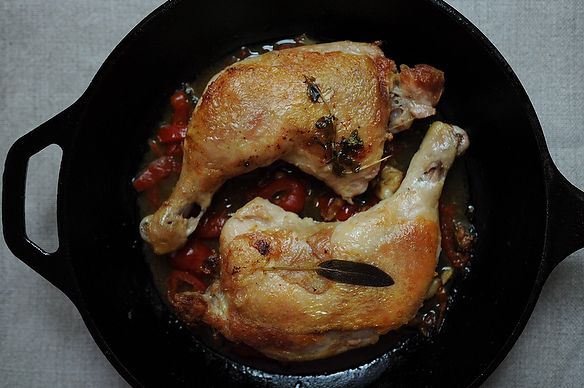 Poor chicken. It gets treated as a means to an end. The protein that supports the so-called interesting flavors in a dish. It's the food that will offend no one (well, no one who eats meat). And the main course that's gluten-free and dairy free, but a prisoner of its practicality.

But if you give chicken a chance to shine on its own, you'll be surprised by how well it pays you for your efforts.

Italians like to cook chicken under a brick -- a real brick, though often wrapped less evocatively in foil -- to get extra crisp skin. When I worked at Albergo del Sole in Lombardy, and an order would come in for the brick chicken, my job was to run to the garden to clip some rosemary and get it in the pan with the chicken and some oil. The moments-from-harvest rosemary and the chicken pressed against the pan by the hefty brick made for a rewarding dinner.

For the cook, it's equally rewarding -- with the chicken turned skin-side-down in the pan for most of the cooking, you have to tinker with the heat so the skin browns and crisps just as the chicken finishes cooking through. Too much peeking and the brick won't get a chance to work its magic. You have to trust your instincts. Don't expect to get it right the first time around. Perfecting this is the fun part.

I've made a few changes to the recipe I learned in Italy. I season the chicken 30 to 60 minutes in advance, and pat it dry before frying. My Brooklyn apartment kitchen doesn't afford storage space for a brick so I just use a heavy pan to set on top of the chicken (which doubles well for making the sauce, since you can't make a wine-based sauce in a cast-iron pan). And in addition to the herbs, I've added sliced peppadew peppers -- although any lightly spicy pickled pepper will fly.

Are you going to give me a hard time for offering up a recipe that only serves two? No. No, you're not.

Can you double it? No. Sometimes recipes are made for two and only two. This is one of those recipes. Stay home with your spouse/partner/pal. Open a bottle of wine ... for two!

Can you make it in a non-stick pan? Yes, but I'd rather you give your cast iron skillet some love.

to cook on the BBQ

Karen January 11, 2015
Love the pickled peppers (I used pickled jalopenos which was what I had). And used the whole chicken - cooked a bit longer. Thank you! It is great.

HungryChic June 21, 2011
I once read a recipe for this that said, "Cook skin side down until the aroma makes you drool. That is when it is time to turn it."

This also works great on a grill! I keep my brick on top of the fridge and love fielding questions about it.

lschrive June 21, 2011
Made this last night - amazing! Definitely adding this to the rotation!
Author Comment

vivanat June 19, 2011
Made this tonight, definitely will need to watch the heat a bit more carefully the next time, but WOW! So tasty, and so thankful for my awesome cast iron skillet.
Author Comment

Amanda H. June 27, 2011
I feel the same way about my skillet. Now that it's well-seasoned, I have such great affection for it.

meredith June 19, 2011
whoa!! you can do just about anything with anything, but the results will be different. cooking with acid in a cast iron pan will produce muddy results, I have a pan that is at least a hundred years old. no matter what I've cooked in it it will come back with the proper aftercare. while you were posting this recipe i was cooking grilled chicken under a brick for a gathering of 60 up in napa. no cast iron and no boneing, and it was a beautiful thing. all the bones were picked clean and full tummys for all.
Author Comment

aargersi June 18, 2011
This looks great! Putting the ingredients on the list right now. I didn't know that about cast iron either so thanks for the info! I learn loads here every week!
Author Comment

Sugartoast June 18, 2011
Okay, what's for dinner tonight is solved! This recipe has everything that I love about chicken - especially the crispy skin part. Thanks!
Author Comment

scragend June 17, 2011
If your old enough to remember issues with the old [ and my favourite ] Carbon Steel knives, and the damage that tomato, lemon or any other acid producing ingredient would cause ... then this all makes sense :-)

lastnightsdinner June 17, 2011
We've been big fans of brick chicken, Marlow and Sons-style, for years. This sounds like a delicious variation.

adashofbitters June 18, 2011
Funny. I was also going to mention the Marlow-style brick chicken, but the wife beat me to it. I love it, but one thing that's kind of a pain is prepping it at home, since it requires taking half a chicken, and removing the breast bone, ribs, and thigh bone, while still keeping the half chicken all in one piece. When you do it well, it makes a great presentation on the plate, and it's quite a lovely thing to eat, but it takes practice for a home cook to master the technique. Amanda's version is far simpler.

lastnightsdinner June 20, 2011
Amanda, this was wonderful - Mike made it over the weekend and we loved it. A couple of variations: we only had green garlic, so he used a couple of thumb-length sections of that in place of the garlic clove. We only had red wine so he went with Carpano Antica vermouth for the boozy component instead. Also, he used half a chicken as that's what we had available - boned out leg/thigh for him, supremed breast for me. The chicken was beautifully cooked, crisp-skinned and moist, and the sauce was to die for. Thanks for a terrific recipe!
Author Comment

Amanda H. June 27, 2011
I haven't had the Marlow-style brick chicken -- sounds terrific! Next time, though, I'm trying your vermouth variation, since I have that one sitting around. Thanks for giving this recipe a whirl.

nogaga June 17, 2011
This looks so tempting-- and I am of the beef-loving variety rarely tempted by chicken! But I will definitely make this in the next few days. Great post!
Author Comment

singing_baker June 17, 2011
I never knew you shouldn't put acid in a cast iron skillet, why is that? does it eat away at the iron?

foodie-pretense June 17, 2011
Not if it's properly seasoned, and if it's not properly seasoned you should season it before using it. Food52 has some great recipes, but they regularly engage in this repeating of conventional "wisdom" that's just wrong, wrong, wrong. I'd advice against putting a strong acid (like something from the hardware store) in cast iron, but most food acids are probably fine unless you're intending to do some long term storage, which cast iron isn't really good for anyway.
Author Comment

Amanda H. June 17, 2011
Hey foodie-pretense, what's up with the tone? We're happy to be corrected (although not in this case, because if you've ever added red wine to a cast iron pan, you know all about the mud-colored sauce you end up with) -- but how about presenting it in a helpful manner rather than a site-wide objection?

singing_baker June 17, 2011
whoa! I had no idea this was such a hot button issue when I asked lol! Thanks for all the answers! p.s. I have never found any cooking advice on food52 to be wrong so I don't know what foodie-pretense is talking about.

Rhonda35 June 17, 2011
Yes, foodie-pretense, this is a helpful and happy community site. Post nicely and respectfully, please. And I disagree; Food52 does not "regularly" post "wrong" information - you may not agree with what they are stating, yet that does not make it incorrect. As my husband likes to say, "There's more than one way to skin a cat" and I think that can be applied to cooking techniques, conventions and tricks, too.
Amanda, this chicken looks SO GOOD!