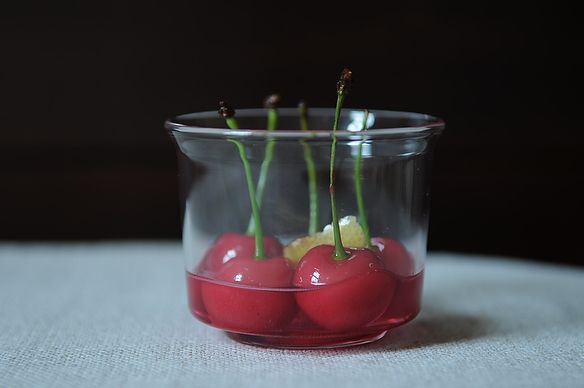 Last week, I narrowly avoided a Cooking From Every Angle disaster. I arrived at our photo shoot on Tuesday bleary-eyed and totally exhausted, having been struck down by the worst cold I've had in a long time. With the help of our stalwart food52 troops, I made it through the day -- though not without an hour-long nap on the end of Amanda's bed (see below). 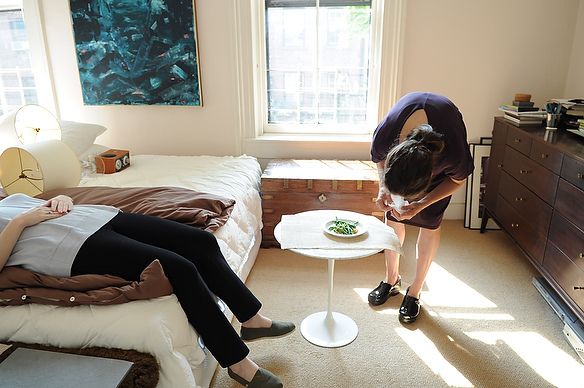 I'd planned to make blintzes with a sour cherry sauce to shoot for this week's Cooking From Every Angle, but all of a sudden that seemed much too labor-intensive. Kristen, Amanda, Kristy and I mulled over what else I could make with the sour cherries we'd gotten from the farmers market -- something simple yet fabulous. Kristy was the one who finally hit on the winner: she graciously shared the basic recipe for booze-soaked sour cherries that she and her fiance had recently concocted as a homemade cocktail garnish. She had covered sour cherries with Luxardo (Maraschino liqueur), brought them to a simmer, then turned off the heat and let them cool in the Maraschino.

So, boozy sour cherries it was: I added a few strips of lemon peel and decided not to pit the cherries, as Kristy and Michael had diligently done. (I'd like to say that this was a purely aesthetic choice, but the truth is, I just didn't want to pit the cherries.) These little booze bombs are both tart and sweet at the same time and would be the perfect garnish for a Manhattan or an Old Fashioned, or another cocktail of your choice (I wouldn't put one in your kid's Shirley Temple, though).

Summer O. July 5, 2011
Thanks Merrill, looks beautiful! I usually drop a brandied cherry into my French 75 but I'm looking forward to giving these a try before those cherries sneak out of the stores.

kmartinelli July 5, 2011
I just made maraschino cherries for the first time using a very similar recipe - they're the best! Glad you're feeling better.

starting I. July 5, 2011
Oh, you lucky East Coasters with your sour cherries! I have been on the hunt for them in the Sacramento area for years. Enjoy (and feel better, Merrill!)
Author Comment

hardlikearmour July 5, 2011
Speedy recovery, Merrill! Lots of rest and lots of fluids for you! I'm enamored with your boozy cherries, they are stunning.
Author Comment

dymnyno July 5, 2011
I made these some years ago after seeing an article and recipe in the NYTimes. They are delicious...much, much better than "conventional" maraschino cherries. They keep forever. I still have a huge bottle of Luxardo that I haven't found any other use for.

hardlikearmour July 5, 2011
I highly recommend the Aviation Cocktail as a good use for your Luxardo. It's 2 oz gin, 1/2 oz maraschino liqueur, 1/2 oz lemon juice, and 1/4 oz creme de violette (sometimes omitted.) It's one of my all-time favorite cocktails.

dymnyno July 5, 2011
I am a certified gin hound so I will definitely try the Aviation Cocktail...thanks!

Kitchen B. July 5, 2011
Dear Merrill, take it easy and I hope your bounce back soon - with the booze in this and a cocktail in hand, nursing your way to health may be closer than ever! And a gorgeous and easy recipe. I just poached my cherries (in the manner of the winning cherry fool recipe with toasted almonds from slulibby), and had them with yogurt for breakfast.
Author Comment

Midge July 5, 2011
Yay! I'm so glad to see this since I was actually pondering making boozy cherries with the pint I have in the fridge. Thanks Merrill (and Kristy!) and I hope you' re on the mend.
Author Comment

nogaga July 5, 2011
These are beautiful! These are the same sour cherries used for making vishniak, another pretty labor non-intensive and boozy deliciousness :)
Author Comment