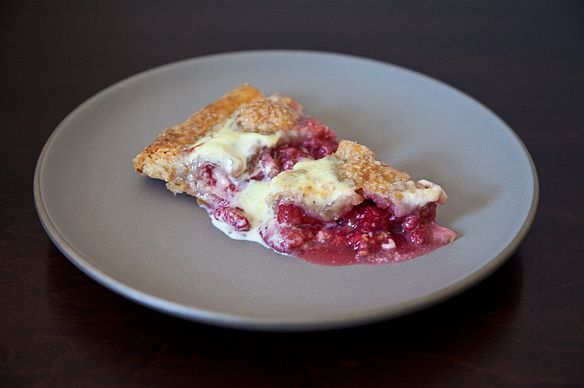 I like cream in my pie, not on my pie. So I was like a moth to light when I read Tamasin Day-Lewis’s Sugar-Topped Raspberry Plate Tart recipe, which starts as a pure-bred fruit pie for its first baking. Then comes the fun part: you take the pie out of the oven as its burbling with warm raspberry juices, and pour a custard through a funnel beneath the crust, like you’re flooding a mine. Then you send it into the oven for one last lashing of heat. The custard doesn't behave exactly as planned. Most of it floods the mine, while the rest floods the crust plain. It all gets a little swampy, in a good way.

I started with Day-Lewis's recipe but ended up somewhere else. I didn't bother with her crust, which I'm sure would have been fine, but it called for weights and I was miles from a scale. I turned to the crostata crust in Cucina Simpatica, but couldn't resist fussing. Taking a nod from Merrill's mom's recipe for Secret Cookies, I used salted butter. In place of the regular sugar, I opted for turbinado, and I increased the flour to make the dough slightly more cooperative.

In Italy, there are cookies called brutti ma buoni -- ugly but good. This pie is their sweet cousin.

For the pie crust: 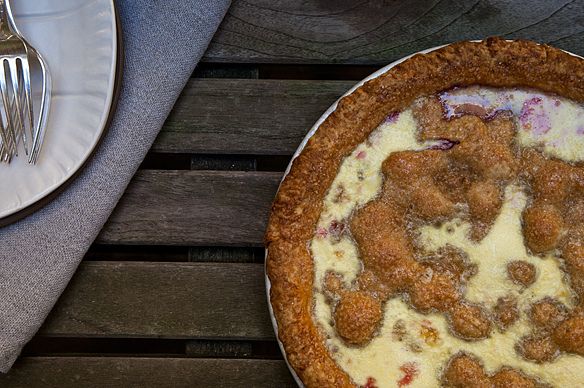 Sarah P. July 12, 2011
Amanda, pie isn't supposed to be pretty, and I think that's why we all love it so! Great recipe! I'll have to give this one a try soon!
Sarah (Pies by Sarah)

cmsapers July 12, 2011
Jon made this yesterday for my mother and family and it was truly awesome! We were lucky enough to have two pieces left over, and it was just as delish today even without the warm gooeyness.

Indusgirl July 11, 2011
I made this yesterday with frozen mixed berries and regular sugar. Turned out wonderful. I used a deeper dish, so my cooking times were longer as well.

creamtea July 11, 2011
This looks delicious. My mother used to make a "peaches-and-cream pie." No top crust in her recipe, just peaches in creamy custard. Looking forward to trying this out.

Rhonda35 July 8, 2011
I was lucky enough to be present when Amanda cut into this pie and it is the bomb! I think it would be delicious made with peaches or blueberries, as well. (Mmmm...peach cream swamp pie...I can taste it already.) Now, if only my oven worked. :-(

EmilyC July 8, 2011
This is one unique and delicious-looking pie. Can't wait to try it!

Oui, C. July 8, 2011
I too am one that likes cream with my pie, though I generally go about it by plopping a scoop of ice cream on top of a warm slice. Love the clever "flooding the mine" technique here, but even without, would be making this one just for the name. Eating a swamp sounds like too much fun to resist! - S

ChefJune July 8, 2011
That looks eminently edible. I'll bet it would be good with blueberries, too!

chichel July 8, 2011
I know that a lot of bakers would take issue, but I tend to use salted butter in most of my recipes. I just back off on the added salt, it's how my mom always did it. Nice choice! Looks like I have to tell my husband it's time to go raspberry picking!

ALittleZaftig July 8, 2011
This looks wonderful, Amanda. I'm going to try it with the glut of mulberries we have right now and a jar of pourable custard I have in the refrigerator.