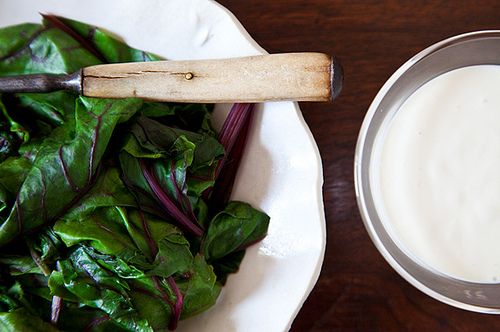 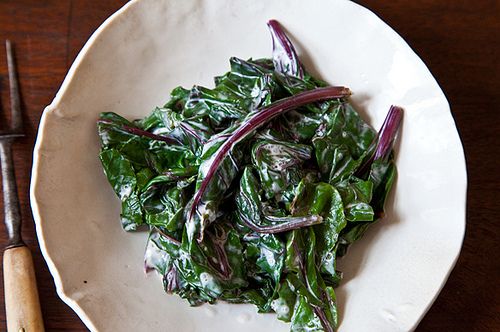 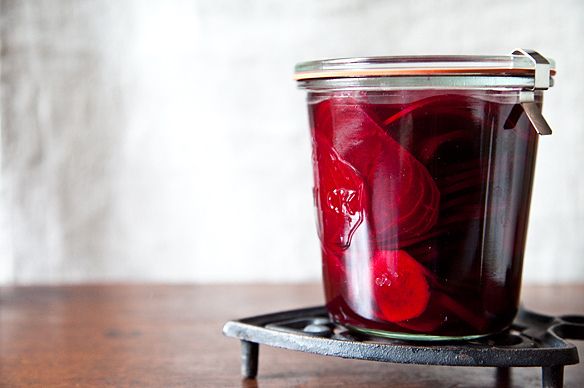 Thrifty in the kitchen. Generous at the table. That would be the cooking mantra I grew up with.

If you bought beets, you'd use both the tops and the roots. Here I'd like to share two beet recipes my mother and grandmother have been making this summer. When I was visiting my mother in Florida, she whipped up a batch of gingered beet pickles every couple of days, and served them with sandwiches at lunch, and on burger night. They come from Matt Lee and Ted Lee's latest book The Lee Bros. Simple Fresh Southern.

My grandmother, who also makes the Lee Bros. pickles, steams beet greens in water and dresses them with a little balsamic vinegar, salt and pepper. The sour cream dressing is one she makes for salads. I combined the two. Because isn't that what's supposed to happen to family recipes?

Adapted from Helen Getz, my grandmother 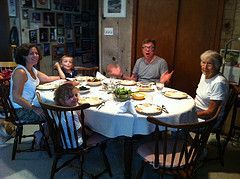 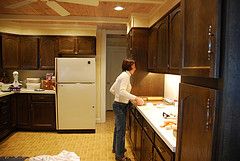 At my grandmother's table with my husband, kids, and sister, Rhonda. My mother, in the kitchen of our old house.

nogaga July 23, 2011
Just made the greens salad with goat yogurt instead of the sour cream I didn't have-- and it was delicious! Thanks for a great recipe. I'll try to make the pickles tomorrow :)

zest I. July 18, 2011
I adore the Lee Bros. and their latest cookbook. I have made almost all of the pickle recipes so far, along with about 37 versions of their fresh buttermilk cheese.

LLStone July 20, 2011
Were the 37 versions of their fresh buttermilk cheese in The Lee Bros. Simple Fresh Southern: Knockout Dishes with Down-Home Flavor? I looked at the table of contents on Amazon.com, but couldn't really tell. I'd love to try all 37 versions and want to get the right book! :)

Zomg July 17, 2011
Oh, but thank goodness for family recipes. I had no idea beet greens could be so tender! That was a lovely lunch. All smiles over here.

Zomg July 17, 2011
Oh, but that goodness for family recipes. I had no idea beet greens could be so tender! What l lovely lunch I just had, thank you!

Fairmount_market July 16, 2011
Our farmers market has been selling bietola greens, a variety from Tuscany that are called kale but are actually part of the beet family. They would be great prepared like these beet greens, and are also delicious raw and are my new favorite salad green.

fiveandspice July 15, 2011
Both of these recipes sound wonderful, but I'm especially excited about the beet pickles. A pate sandwich with pickled beets is one of my favorite treats, and I think I'm going to give these a try!

Amy T. July 15, 2011
Oh, just in time! I harvested a big batch of chioggias yesterday from my garden, I have tons of greens. I usually just eat them raw, but I have so many, I'll try the pickled beets on my next harvest. Can't wait!!

Lizthechef July 15, 2011
Any recipe from your grandmother is one I want to try - love the beet pickles too. Thanks for sharing!

Midge July 15, 2011
That jar of beet pickles is almost too pretty to open. Will be making them soon (and the greens!). Love the Lee Bros.

EmilyC July 15, 2011
Love both of these recipes, Amanda. The beet pickles remind me of the ones that my mom cans every year -- they're so versatile and addictive. She pickles hers with clove and cinnamon stick and sometimes leaves the beets in 1" chunks. I'll suggest that she try a batch with ginger when she makes them later this summer.