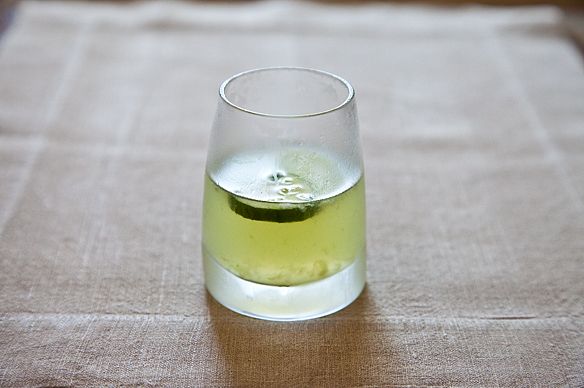 Whereas I am at this very moment eating chocolate-covered almonds for breakfast, the world perhaps should not be taking cooking advice from me.

But how about some mixology tips? Back in Los Angeles with my friend Joshua, he of the very full and generous home bar, I got to do a bit of pouring, specifically of Lotus Cocktail.

Joshua had picked the cocktail from the site because, he said, he wanted something summery and light that “wasn’t like a fruity piña colada,” but also something with an herbal taste, and simple and fun, “something we could play with.” All right sir!

Our first improvisation concerned the gin, as there was no Hendrick’s on hand. We substituted with Tanqueray No. 10, which has a divine sort of vegetal nose. Into the glass went the cucumbers, the Domaine du Canton and, after proper muddling of the cucumbers, the scoop of ice called for here. (How much is a scoop? “I don’t know and it doesn’t matter because the ice is going to be held back anyway,” Joshua said. Got that?)

Strained, then doused with soda and feted with a darling cucumber garnish, the drink was thus served. It was heavy on the ginger, the essential flavor of Canton, with a heavy alcohol finish. A bit too much, for my taste. So, how to work on it?

We wondered about taking the Canton down by one third and adding a dash of Chartreuse, that herbal liquor made by Carthusian Monks. Hmm. It was okay, but needed something. I decided that something was lime. Blech.

Moving on. We next made the recipe exactly as written, but substituted St. Germain, an elderflower liqueur, for the Canton. I liked it, but I am a shameless St. Germain apologist. Joshua found it watered down. At this point, sliding a little down the kitchen bar, I started to wonder where our spouses were. Jennifer, Joshua’s wife, ambled and took a few sips of each.

I would like to report to you what she said, but it’s sort of mixed with some muddled directions about dinner, and a discussion about bike routes. I am pretty sure my husband was watching soccer. I steadied myself. We had one more cocktail to mix.

We then returned to the beginning, with an herbal twist. We muddled about six mint leaves with the cucumber, took the Canton down to half an ounce from 3/4 ounce, and followed the rest of the recipe as written. The Canton was balanced, and we were much closer to the way this cocktail was meant to be consumed than any other way we messed with it.

This is the essence of community recipe sharing no? Take it off the grid, and then come back to where you belong.

Enjoy Jenny? See the Feta, Pine Nut and Mint Pesto she pulled together from her garden.

I_Fortuna July 3, 2013
Ginger liqueur is right up my alley. I love this for a nice summer cocktail! Thanks!

Ohdrat August 6, 2011
Finding Domaine De Canton was a bit more of a challenge than I expected but after my successful search and then making the cocktail I am a fan! The second batch I upped the Domaine De Canton from 3/4 to a full ounce and I found that more to mine and my guests liking. Also, Hendricks is a must for this one.

lorigoldsby July 18, 2011
Salut! Jenny....love how you "muddled" thru....ever thought of using an actual pickled lotus root as the garnish? They are quite pretty in an airy way. My only tip is to rinse them well and maybe allow them to soak in a gin or domaine bath for a few minutes
Author Comment

lmerdmann July 18, 2011
The drink sound wonderful, but in a pre-chilled glass? Don't you mean simply "chilled"? After all, pre-chilled would still be warm! (Years ago we used to heat the oven as we were making a dish; now we preheat it.) Let's think before jargon takes over the world -- if anyone cares. Guess I need another drink.
Author Comment

Jestei July 18, 2011
I think the author means chilled pre-making. Anyway. Not worst jargon I have heard in my life. Think of all the synonyms for being fired.

healthierkitchen July 18, 2011
Just one more reason to get myself over to the store to get some Domaine de Canton and St. Germain, which I have been meaning to do for months!
Author Comment

Sagegreen July 18, 2011
I love your experimentation with this drink, especially with the mint. Having experimented last week with new recipes, I wound up making my company this past weekend regular old muddled cucumber and gin gimlets, which they enjoyed.
Author Comment

mrslarkin July 18, 2011
Oh, fancy! Will try very soon, when I'm in a fancy mood (which is practically never, but I promise I'll try it anyway.) I have made this awesome cucumber cocktail ...it's a drink AND a snack! http://www.food52.com/recipes/13213_cucumber_cooler Cheers, Jenny!
Author Comment

Panfusine July 18, 2011
Hi Ho Hi Ho... off to get some Gin I go!!
can't wait to try this for myself, since my kids totally commandeered your last weeks dish!
Author Comment

MrsWheelbarrow July 18, 2011
This looks delicious! I've been on a St. Germain kick and I've been making something called a French G&T - 2 parts gin, 1 part St. Germain, 1/2 part lime juice. Tonight, I'm going all out with the Lotus. Thanks, Jenny.

wssmom July 18, 2011
Is everyone on the St. Germain kick? I love the stuff and the French G&T sounds lovely ...
Author Comment