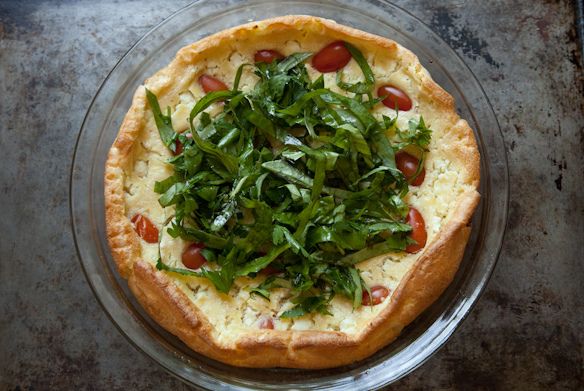 So to be fair, dinner expectations get a little lowered when you hear your spouse scream from the kitchen: “Can I get a little help here? My clafoutis is on fire!”

But the road to culinary recovery is often difficult and fire-singed, an effort of multiple attempts and perhaps even a few tears, all in the name of perfecting a single dish. The fact is, as easy as it sounded on paper, and as excited as I was to make use of the cherry tomatoes that had popped up in my garden during my two-week vacation in the west, Cherry Tomato Clafoutis did not work out on my first try.

The egg mixture was more scrambled eggs than custard -- perhaps due to undercooking -- and had a weird metallic aftertaste -- this I cannot explain -- and the whole effort seems to lack any cohesive flavor. It was all texture -- eggy, chunky, slippery (tomatoes) -- without any real lingering pleasure. “I don’t know what it wants to be,” said my husband, rather sadly, as this was our first home cooked meal in weeks. (Also: I was not involving the salad, as I had none of the ingredients in my garden, which was picked over with my blessing by my housesitter, whose results are astoundingly documented here.)

I have conquered Beef Bourguignon! I have been known to take on marzipan! I would not be undone by eggs.

Back in the kitchen a few days later, I began with a fresh car ton of eggs, as much a nod to superstition as freshness. I even got some new flour. As an experiment, I cut some of the tomatoes in half, just to see if that helped. I then ran outside and grabbed my new favorite weed -- that would be basil -- and put eight or nine leaves with the tomatoes in the bottom of my oval dish. After dumping my egg mixture on, I dotted the whole thing with a hard goat cheese, rather than the soft stuff, which I thought might yield something better than the cheese blobs of the last effort.

After about 25 minutes, I turned on the broiler and finished the dish under that flame, but was distracted for a few minutes by the press release wrath of Senate Majority Leader Harry Reid of Nevada, which led to a teeny tiny oven fire that you should NOT be worrying yourself about. Caramelized edges. Okay black.

No matter, the results were so delicious -- a firm custard that still yielded easily to my fork, succulent tomatoes with a little basil and cheese zing. My husband agreed, then added, “Um, did you just eat half a claufoutis that was meant for four?” Well, this is Washington. Everyone’s interpretation of numbers is different.

Can't get enough of Jenny? Check out her previous column on the Lotus Cocktail.

Jazzball August 3, 2011
If I'm out of goat cheese (and too lazy to go to the market just then), what would you suggest as potential substitutes? I love clafoutis and can't wait to try this one.

davises88 August 1, 2011
Just made a basil/cherry tomato clafouti from the new Joan Nathan cookbook (French Jewish cooking) for a dinner party last it. It was a hit. Will try this one as a comparison. What I'd love to do is see if I could decrease the flour (without it turning into a frittata) to minimize carbs? Interestingly my recipe called for a springform (I wrapped it in foil). The basil tucked between tomatoes in this custard looked so nice when unmolded onto a platter.

ChezUs July 31, 2011
I have been making sweet clafouti for the past couple weeks - it is my go-to dessert during the summer. I was just thinking last night when I was in a bind for an appetizer of trying a savory one to serve with toasted baguettes and bubbles. Now that I have seen this, I really have to try it out!

SpinachTiger July 31, 2011
Wonderful idea. I recently had some sun gold cherry tomatoes (they are bright orange) and sooo sweet. Would be perfect in this recipe.
Author Comment

boulangere July 26, 2011
I loved the idea of this when I first saw it. I've never had a savory clafoutis, and my experiences with sweet ones have been underwhelming. It's one of those neither fish nor foul things: not exactly a custard, but several grains shy of a cake. The savory angle just seems much more rich in possibly good results, and I'm glad that in the end yours were. Metallic taste: I've had the same experience from time to time with tomatoes and eggs. No scientific tabulations here; it's just that I've noticed that if I don't sauté tomatoes to some degree before adding them to some kind of eggs, a metallic taste tends to result. I have no idea why, though I should probably look into it at some point, maybe see what Sir Harold has to say. As for fire, you should have been in Paris with the daughter and I last week. Making a humble carbonara for dinner in our little apartment, without even coming close to burning anything (and no one can flirt with the dark side of food better than I), we set off the smoke alarm in our apartment, the one in the hall outside the door, and the one in the upstairs hall. I'd do it all again in a minute if a bevy of French pompiers would race to my door. Heck, I'd try a clafoutis for it.
Author Comment

Jestei July 26, 2011
wow this is seriously informative, as well an entertaining. i think we need to get to the bottom of metallic tomatoes.

boulangere July 26, 2011
I'll work on the tomato-egg connection. When I can sleep in my own time zone.

Yes, I think we need to ask Harold Magee or Alton Brown about the metallic thing - we need the help of a scientist and/or a researcher.

Waverly July 26, 2011
I find so much comfort in other people's kitchen disaster stories....probably because I can relate. A savory clafoutis has never crossed my mind although in the end it sounds like it turned out well.
Author Comment

Jestei July 26, 2011
i highly recommend this dish because it is very quick

mcs3000 July 27, 2011
It was awesome - will make it again. I knew it would be a winner when I mixed up the marinade - so good. btw: I'll fess up. I originally was going to make it Monday, but I didn't read the directions: chill, ideally overnight (duh). So I made the 10 minute recipe on food52: seared salmon with cinnamon + chili powder. I highly recommend both recipes.

jmddc July 25, 2011
Yummy and such a great story. As a native Washingtonian and political junkie, I totally understand your distraction!
Author Comment

WeeklyGreens July 25, 2011
I don't know what it is about these eggy dishes, but I can also polish off what is supposed to be 4 servings in just one sitting. What gives?

Also, thanks for the introduction to Ivy Gourmet! Fun reading.
Author Comment