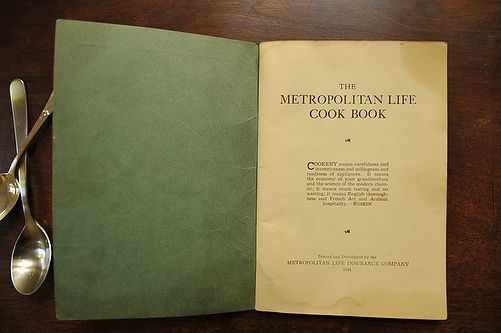 At the food52 launch party, Tamio gave Merrill and me a great little book, The Metropolitan Cook Book, published by the Metropolitan Life Insurance Company in 1924.

The book begins with a quote by Ruskin that mirrors so much about our approach to cooking at food52: "Cookery means carefulness and inventiveness and willingness and readiness of appliances. It means the economy of your grandmothers and the science of the modern chemist; it means much testing and no wasting; it means English thoroughness and French Art and Arabian hospitality." We may need to work on the French Art and Arabian hospitality, but we're getting there.

Little did Tamio know we have a thing for old recipes -- we've spent the past 5 years testing more than 1,200 New York Times recipes going back to the 1850s. Many of the Metropolitan recipes mirror those in the Times in the 1920s. There are potato croquettes, oyster chowder, Apple Snow (an apple-scented meringue dessert), brownies, doughnuts and iced coffee.

In this spirit of this week's stuffing theme, I thought I'd include the Metropolitan's recipe for Prune and Apple Stuffing. To make it, I suggest mixing together all the ingredients, spooning them into a buttered baking dish and baking it at 350-degrees until crisp on top. If you'd like to update the recipe, add a teaspoon of chopped fresh thyme, 1 cup chicken broth and a few splashes of brandy.

Kelsey B. November 10, 2009
I love vintage cookbooks. This has now inspired me... I am going to submit my grandmother's recipe for Lemon Snow & Custard Sauce next week! I was worried it was too "old-fashioned" for this, but after reading these comments maybe people would like it. I make it at home a lot! Sometimes the oldies are still the best.

Amanda H. November 11, 2009
Merrill and I have made Apple Snow (not this one but an older one) -- we'd love to see your Lemon Snow recipe.

lastnightsdinner November 10, 2009
What a great gift - I love vintage cookbooks like this, and have a small collection of my own. Thanks for sharing!

Donnayln November 10, 2009
What was old is new again - I love it! Thank you for sharing this cook book.

MrsWheelbarrow November 10, 2009
Charming cook book! Perfect for food52 inspirations. I have a few of these sweet cook books myself, discovered in funny little 'antique' stores on back roads.

mrslarkin November 9, 2009
what a thoughtful gift! I'm sensing some new recipe themes in that quote...