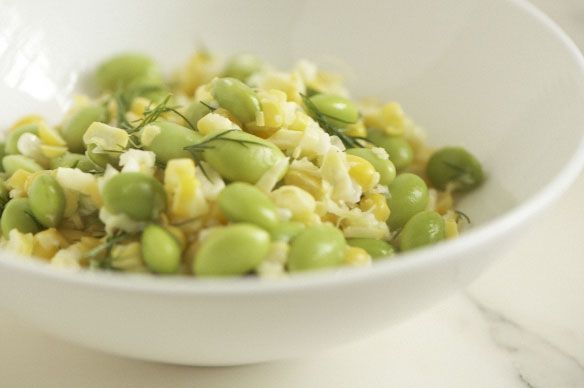 Guess what everybody? I have found right here the best succotash recipe ever (Simple Succotash -- no offense to Rhonda's) on the site, and it takes almost no effort at all.

In fact I predict that you will begin to obsessively make this recipe over and over again until one day you will find yourself sitting in your nightclothes in front of your computer reading Tweets about things you really don’t care about at all, eating cold succotash from an old yogurt container and you will realize that you have in fact grown quite tired of this dish, but by then corn season will be over and it will be time to work on getting sick of pumpkin.

So, first of all, Sagegreen very generously offers you the option of making this dish with either edamame soy beans or baby lima beans. But I am telling you that you should use lima beans (I don’t think mine were babies they were pretty big actually) because they are in the market right now and are true to the spirit of this dish. Now you might pause here to remember that I staunchly advocated making carbonara with green beans, an act that caused the chewing class to have such a social media meltdown that I thought I would have to send emergency vehicles to various gastro pubs across this great nation to revive people over micro brews.

So, to summarize, no one dares to tell me I can’t put vegetables in my carbonara, but I am telling you to use fresh lima beans here (as you see above, my pals at food52 were obstreperous and anti-southern and went their own way with edamame). You will shell them yourself. Here is how you do that:

2. Ask your children to shell them while you put your water up to boil.

3. If step 2 fails, put a large load of sheets in the washer and make them fold them later, and shell them yourself into a very pretty bowl and imagine you are being food styled even though you have burned and ugly hands. Try to find someone to keep you company while you do this, but if you fail, listen to Beyoncé, who is totally on your side in this.

I do think it is important not to let your starches get mushy here, as the author suggests, but I found the cooking times a bit on the narrow side and my corn and beans both needed at least another minute. Your times may vary so pay attention. In just a few minutes, however, it will be time to drain these guys (don’t forget to reserve a bit of water as you will need it) and add your fat. I happened to have sour cream on hand, which worked very well, but all things being equal I would prefer crème fraîche and will use it the next time. I had an abundance of mint in my garden, so I used that, but dill would probably be a little better match for these beans.

Serve warm as suggested, with a bit of salt and a crank of black pepper. Think about all that vitamin C and fiber you are giving yourself. Or don’t! I’m flexible!

lorigoldsby August 24, 2011
LOVE step 3!! children need to remember that if you don't do what I asked, then your 2nd option may be LESS palatable!

MrsWheelbarrow August 24, 2011
Guess what I had this morning? Breakfast of champions! LOVE.

Musette August 23, 2011
We just shucked and processed 6 doz ears of corn (fried corn - yum!) and sauced 2 bushels of tomatoes ( I made them skin the tomatoes - hey! they eat em, they can skin 'em). Now we're on to peaches, which I finished picking yesterday. A full bushel. They will have to skin those, too.


If I bring in fresh limas to shell I'm afraid they will fall over in despair...

chef_ub August 23, 2011
Why in the world would anyone mix perfectly good corn with lima beans(yuk)? Though I do believe the resulting abomination has been aptly named. It does indeed succ.

boulangere August 22, 2011
My mother was the lima bean queen. I believe I had eaten more than anyone truly needs by the time I was 10.

Bevi August 22, 2011
This sure beats my memories of succotash as a kid. Nice recipe, Sagegreen!

Sagegreen August 22, 2011
Thanks, Jennie for discovering my recipe! Ironically, I was just commenting on Whole Baked Pumpkin Oatmeal when I noticed your post. At least you didn't catch me sitting in my night clothes in front of the computer, with a bowl, this time! I so agree about the lima beans.

Sagegreen August 22, 2011
....but I confess, I eat this all year long with a switch over to frozen when fresh is no longer available.