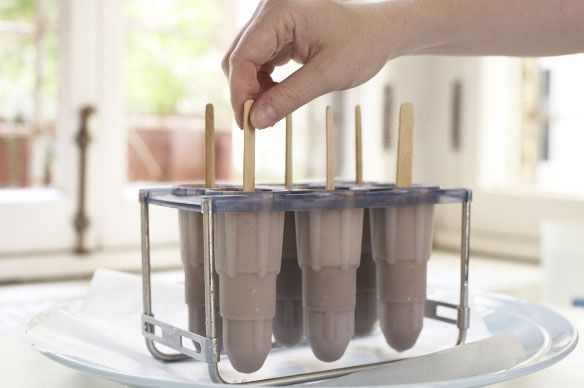 Loathe to let summer slip away without coming up with a frozen treat, and inspired by both Amanda's beautiful Blackberry, Rosemary and Yogurt Popsicles and this recipe for Mexican Chocolate Pops from Leite's Culinaria, I decided to try my hand at a double-layered fudgesicle. I like Mexican chocolate, but in small doses, so I started with the spiced bittersweet chocolate base from the Mexican Chocolate Pops and then added a milk chocolate layer spiked with vanilla bean to mellow things out and create a two-tone effect.

When you eat the fudgesicle, you start with the fiesty dark chocolate layer -- boosted with both cinnamon and cayenne -- and work your way down to the sweeter, more mild-mannered milk chocolate and vanilla layer, ending things on a cooling note. Of course if you like, you can just choose one base over the other, or you can leave out the spices and just go straight dark and milk. It's your fudgesicle -- I won't judge!

RisaCooks September 11, 2011
These sound and look amazing. When I finish my Mango Pops, I will clean out the molds and make a batch. I'll let you know what I think.

linda_wagner September 11, 2011
Can you please tell me where to buy the popsicle holder.....
Author Comment

Creative C. September 11, 2011
I love fudgesicles too; especially since I might add just a touch of adult beverage to them. Think Kahlua!

I have a similar mold that I got from Amazon and it's worked very nicely. A bit more expensive but it's metal and sturdy and I use it a fair amount:

Merrill S. September 11, 2011
Love that! For anyone who can't find Amanda's molds, yours seem like a great substitute.

Panfusine September 9, 2011
OOOHH, love frozen popsicles. we used to get kulfi frozen on sticks outside the school, sneakily buying these without getting caught by the supervising nuns was part of the fun...Where could I pick one of these molds?
Author Comment

boulangere September 7, 2011
Can't! Theobromine wrecks havoc with me. Can't have caffeine either. Sob.

boulangere September 7, 2011
So beautiful. I miss chocolate so much.
Author Comment

Blissful B. September 7, 2011
gbheron, Smitten Kitchen featured a fudgesicle recipe that uses only milk. I tried it & it was delicious (not at all icy), but there's a little butter in that recipe that might serve the same function as the cream? Anyway, here it is for comparison: http://smittenkitchen.com/2011/06/fudge-popsicles/ Fiveandspice, I also loved learning how easy it is to make homemade fudgesicles!

MeghanVK September 7, 2011
I've made these as well - totally delicious and not a bit slushy. Also I believe the cornstarch helps the pops stay smooth? Deb addressed it in the comments.
Author Comment

Merrill S. September 7, 2011
Glad to know about these. Thanks for sharing!

gbheron September 6, 2011
What do you think would happen if you skipped the cream and used only milk? Would it be ice crystal city?
Author Comment

EmilyC September 6, 2011
I absolutely love these! They're going near the top of my "to cook" list!
Author Comment

chl0525 September 6, 2011
Where oh where did you find that popsicle maker? I would love to have one but I want be able to use popsicle sticks so that I can make a batch and move them to another container and start another one. So many of the ones I find are 2 part deals with a special base piece. Thanks in advance!
Author Comment

fiveandspice September 6, 2011
Wow. Are fudgesicles really that easy? I always assumed you had to make something custardy. This is a dangerous thing to know! I have such fond, fond memories of getting fudgesicles as a very special treat when I was little.
Author Comment