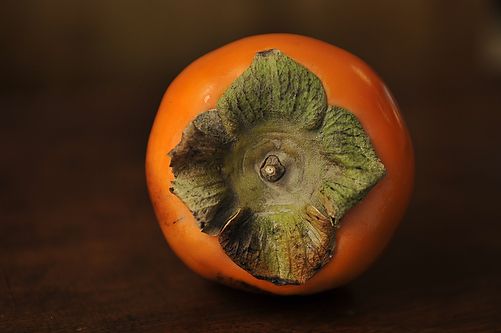 Last week, several of the Autumn Salad submissions contained persimmons, which got us thinking about this distinctive fall fruit, known by the ancient Greeks as the "fruit of the Gods." There are two main types of persimmons available in the United States: one is firm when ripe, and the other is soft. Fuyu persimmons, which are round and squat like a tomato, are the most common variety of firm-ripe, or "non-astringent" persimmon found in this country; these are typically sliced and eaten raw. Hachiya persimmons, a popular soft-ripe (or "astringent") variety, are longer and more pointed, and they're ready to eat when the flesh of the fruit softens to the consistency of jelly. It is this second type that you should look for when a recipe calls for "persimmon pulp," which is essentially just a fancy term for the soft flesh of an astringent persimmon after it has been scooped from its skin.

Persimmon is mild in flavor, and quite sweet. Personally, I think the fruit does its best work as a mellow foil for other dominant flavors -- whether it be the tartness of a vinaigrette or the warm, sweet spices of my aunt's famous Persimmon Chiffon Pie. I first had this pie several years ago, when my entire family spent Thanksgiving at her house in Indiana. The pie was a thing of beauty, a delicate pale peach mass floating atop a crisp, brown crust. I had never tasted a persimmon before -- at least, not that I could remember -- so of course I was curious. The pie was both ethereal and rich. It was lightly sweet from the persimmon and got a spicy kick from the gingersnap crust. It is one of the better, and more unusual, Thanksgiving pies I have ever had.

Here is the recipe, which originally came from a cookbook of persimmon recipes first published by Bear Wallow Books in 1978. Try it if you're feeling adventurous -- I promise you won't be disappointed.

1. Heat the oven to 350 degrees and lightly butter a 9-inch pie pan or plate. Mix together all of the ingredients for the crust using a fork, or pulse briefly in a food processor. Spread the mixture evenly in the pan, using your fingers or the flat bottom of a drinking glass to press it over the base and about 1/2 an inch up the sides. Bake for 10 to 15 minutes, until lightly browned and firm. Cool the pan on a rack while you prepare the filling.

2. Soften the gelatin in 1/4 cup cold water. In a medium saucepan, combine the egg yolks and 1/2 cup of the sugar, and whisk until light and thick, about 2 or 3 minutes. Add the persimmon pulp, milk, salt and spices and cook over medium heat, stirring constantly, until slightly thick.

3. Remove the persimmon mixture from the heat and add the softened gelatin, stirring gently until dissolved. Transfer to a clean bowl and refrigerate until the mixture begins to thicken. Using a clean bowl, beat the egg whites until foamy. Gradually add the remaining 1/2 cup of sugar and continue to beat until stiff peaks form.

4. In a separate bowl, whip the cream until soft peaks form. Fold the cream into the gelatin mixture, and then gently fold in the egg whites. Spoon the filling into the cooled pie crust and chill until firm, at least 4 hours. Garnish with whipped cream and sprinkle lightly with cinnamon before serving.

HumbleBean December 9, 2009
I just made this last night—the flavors are really nice and surprisingly similar to pumpkin pie. My filling didn't solidify properly and had the consistency of pudding. Overall, this was too sweet for my taste, but I think it might be because my persimmons were really sweet to begin with. It was difficult to adjust the sugar amount because the filling doesn't come together until the very end. Any suggestions?

Linda R. November 29, 2009
I have a Hachita persimmon tree in my Northern California backyard, but the fruit is not quite ready. It all ripens at once, so my mother-in-law taught me to scoop out the pulp and freeze it in 1 cup containers. It freezes very well, so if you happen to find a tree with persimmons in your area, ask the owner if you can have some! There are not all that many persimmon recipes out there -- pudding is popular -- so I am delighted to see this. I can't wait to try it!

Merrill S. November 25, 2009
Thanks, everyone for the lovely comments! Let me know if you make this, and how it turns out.

The T. November 25, 2009
I love your site. I am a food's teacher and also blog about it. What you wrote about "WHY COOK?" really hit home with me and what I try to teach my students. I will be using your site as a resource. Thanks.

one question merrll: when you are whisking tog the egg yolks and sugar, you don't have the heat on you turn it on when you add the other ingredients - correct?

Aliwaks November 24, 2009
Lovely! I've a bowlful of persimmons ripening on the counter...hmmm wonder if i have it in me to bake one more pie

Kelsey B. November 24, 2009
This is so interesting, I always wonder what else I can do with persimmons and this looks like a great answer.

EmilyNunn November 24, 2009
I'm leaving the house to look for persimmons right this minute.

pierino November 24, 2009
Once again I'm reminded of the wisdom of my hero, Calvin Trillin:
"The Indians, having had some experience with Pilgrim cuisine during the year, took the precaution of taking along one dish of their own. They brought a dish that their ancestors had learned from none other than Christopher Columbus, who was known to the Indians as "the big Italian fellow." The dish was spaghetti carbonara--made with pancetta bacon and fontina and the best imported prosciutto. The Pilgrims hated it. They said it was "heretically tasty" and "the work of the devil" and "the sort of thing foreigners eat." The Indians were so disgusted that on the way back to their village after dinner one of them made a remark about the Pilgrims that was repeated down through the years and unfortunately caused confusion among historians about the first Thanksgiving meal. He said, "What a bunch of turkeys!"'