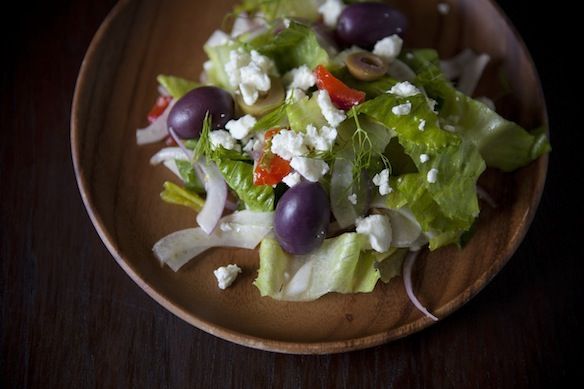 The other week, I had dinner at Kefi, the most casual of Michael Psilakis’ ever-growing roster of New York City restaurants. Something I always order there, in addition to the fantastic meze platter and the transformative halvah chocolate mousse dessert, is the Greek salad.

Kefi’s salad is simple, yet perfectly balanced, the way a good Greek salad should be. There's a little more tang to the vinaigrette to balance out the mellow saltiness of the feta; crisp, crunchy veggies; and of course plenty of olives. Kefi’s version uses roasted red peppers instead of raw, and it also incorporates some shaved fennel, which I think makes it a standout.

Last week I attempted to recreate the salad on my own, and I think I got fairly close. (I left out the cucumbers, which my husband – a cucumber fanatic—would not approve of, but with the added fennel, I felt there was plenty going on.) Hope you enjoy it!

To see the photo slideshow and full recipe (and to print and save it), click here.

Allison C. October 28, 2011
Merrill, I have to confess to being one of those folks who can't imagine a "horiatiki salata" (Greek village/peasant salad) without cucumber, but... I love fennel so much and the idea to include it here is genius, so I can make an exception. Of course Psilakis also has the credentials--and innovative spirit--that permit creative license. We're the better for it, usually. And also for your having brought the idea home and made it yours (and subsequently ours at F52). Thanks!

Panfusine October 28, 2011
Oh boy, just as I was stabilizing from going bonkers about what to include for my potluck tomorrow, here is this salad.. Ok.. time to go nuts again.. I cd just swipe the screen.. it looks & sounds soo good!