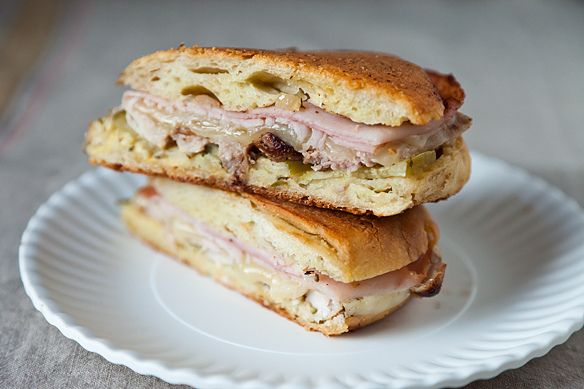 You’ve got to love a food underdog like the cubano, the Cuban sandwich made with pork, garlic, cheese, pickles, and more garlic. It was yards ahead in the pressed sandwich race, and miles ahead in the lust for pickles, and yet here it is in last place.

Ed Levine, the founder of Serious Eats, and his disciplined team of editors researched the cubano, canvassing the country, eating as many as they possibly could, and more than any doctor would recommend, until they came up with their own version -- the cubano mixto, which controversially calls for blade-end pork chops. Their hard work pays off with a sandwich that’s salty and tangy and just gooey enough not to feel indulgent.

For Serious Eats, the book, Ed and the gang repeated this exercise for many classic American foods -- hot dogs, burgers, doughnuts, and barbecue – giving us a travel guide and cookbook in one. Merrill and I are now in San Francisco, the book dog-eared and ready to lead us to monumental waffles.

To see the full recipe and to print it, click here.

AntoniaJames November 8, 2011
i suppose that in Florida there are regional differences as to what, exactly, constitutes a true "Cubano." I have it on good authority from an expert familiar with the Cubano found in Ybor City (the centuries-old Cuban community in Tampa) that a thinly sliced salami (a Genoa was recommended) and yellow mustard (which you have here) are indispensable. Will have to make this version for my Cubano-loving sons when they're home for the holidays! ;o)

MexicoKaren November 6, 2011
No, it's not an authentic Cubano - the authentic one has both roast pork and ham, swiss cheese, and dill pickles. And butter. That's all. But it DOES sound like a terrific sandwich. Cuban pork is often roasted with orange and garlic, so the flavor is true to its origins. I think we get very focused on authenticity, to the detriment of spontaneity and creativity. I live in Mexico and am always tempted to lecture people about authentic enchiladas, which are never baked, but really, who cares as long as they taste good?

Lizhm November 6, 2011
Swiss cheese? Hmmm.
Best one I've ever had is at Chez Henri in Cambridge, MA (since I have never actually been to Cuba, ahem.) They also have a veggie version that rocks. Will ask Paul O'Connell his secret next time I see him!

KitchVega November 6, 2011
I don't know what that is but it's not a cuban. NO onions or garlic or orange. I'm sure it's tasty but it's not a true cuban.

Sasha (. November 3, 2011
I love, love, love Cubans. I tried to make the traditional bread for it back when I cooked Cuba for my adventure, but had some trouble with the slits - they typically make them with blades of a special palm tree, I believe, pressed into the dough. I read you could achieve the same effect with twine/rope so I tried it. The fuzzies in my natural twine stuck behind and made my bread a bit hairy. Then I tried metal skewers. It was a tasty experiment but it would be neat to figure out how to do it right.