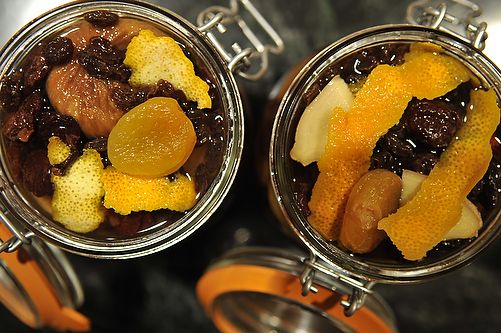 FOLLOW-UP: After a week or so of letting the fruit soak in the gin and brandy, here's what I found: I prefer the gin, which has a crispness that brandy lacks. However, I liked the flavor of ginger and star anise better than cloves and cinnamon, so next year I plan to combine the two -- gin with ginger and star anise. As my mother pointed out, the fruit really is best between weeks 1 and 3, so if you're making the fruit to serve on a particular day, plan accordingly. And as for what to serve it with, I'd suggest passing it alongside a cheese course, spooning it over ice cream or cake (with some of the macerating liquid!), or adding it toward the end of cooking roast pork.

Most years, in early December, my mother starts making a jar of gin fruit for the holidays. Her recipe is mindlessly simple -- layer your favorite dried fruits with some spices, cover with booze -- so I thought I'd play around with two variations to see which I prefer. I hope you'll join me in this experiment.

With the first jar of fruit (I used dried figs, prunes, apricots, cherries and raisins), I employed my mother's traditional aromatics, cinnamon stick and cloves. And I've added one additional ingredient: clementine peel. This jar was filled with Bombay gin.

With the second jar of fruit, I used the same fruit, but layered it with star anise, fresh ginger and clementine peel, and covered it with brandy (until the bottle ran out) and Hine Cognac.

Now all there is to do is wait a week. I think it's ok to sneak a few tastes before then, don't you?

My mother pointed out that you may need to replenish the gin and brandy after a day or two, as the fruit soaks up the alcohol. And the fruit is best consumed within a few weeks, before the fruit's sugars begin turning the booze to syrup.

Let me know if you give it a try!

1. In a large bowl, combine the dried fruit.

2. To a lidded 1-quart glass jar, add 1/4 of the fruit. Add 1/4 of the sugar, cloves and clementine peel. Repeat 3 more times. Push the cinnamon stick into the center of the fruit. Pour over enough gin to just cover the fruit. Seal the jar with a lid. Let sit for a week before eating, replenishing the gin as needed.

1. In a large bowl, combine the dried fruit.

2. To a lidded 1-quart glass jar, add 1/4 of the fruit. Add 1/4 of the sugar, star anise, ginger and clementine peel. Repeat 3 more times. Pour over enough brandy to just cover the fruit. Seal the jar with a lid. Let sit for a week before eating.

eatboutique December 15, 2009
My cognac update: I have to say - my version which used cognac isn't right yet. But I taste the potential. Gonna give this 2 more weeks - it's only been 1 so far...

AntoniaJames December 15, 2009
I made and really like this "Fruit Cocktail." I didn't have enough brandy for my third jar of fruit, so I used 2 parts Kirsch (cherry brandy) to one part regular brandy. The results are fabulous! It doesn't really taste like cherry but it tastes divine. I skipped the star anise, thinking it might be just a bit too complex. I'll probably test that next year . . . . or next month! I like the gin version a lot, but in the next batch, I plan to use lime peel instead of orange, because I really like lime with gin. Will definitely serve one batch with roast pork, and will make my mother's sour cream cake to accompany the other, for one of our dinner parties this month. This one is a keeper!!

AntoniaJames December 10, 2009
I made two batches of the gin version, but wasn't sure what I was going to do with it . . . . . but then today, I decided to spread the love around . . . . so I put stuffed fruit and liquid into half-size (4 oz.) Ball canning jars to use in the center of the plates of cookies and truffles I'll be distributing after dinner to our friends in the neighborhood. I labelled them with this: Fruit "Cocktail" (Gin + Fruit) -- ENJOY!! I tasted it, too. Delightful!!

hungryinbrooklyn December 7, 2009
We've done this with aquavit and raspberries, I think. It turned a beautiful pale maroon color and pretty potent by Xmas having added the fruit at the end of the summer. Headed to Sahadi's tomorrow to stock up on dried fruit.

litmajor73 December 7, 2009
When I was young, in the 1960s, my mother put pineapple chunks in a shallow bowl, douse with gin and partially freeze. I recall she said she found the recipe in a woman's magazine and attributed it to Mary Moon Hemingway. I've searched the internet for it but have never found it.

Amanda H. December 8, 2009
Love this idea -- want to try it! Btw, so far the gin version is winning in my experiment. It's crisper in flavor, though I do like the star anise (would use 1 fewer next time) in the other. The brandy version would be great with cheese.

dinnerbelle December 7, 2009
I have also made Maida Heatter's gin-soaked chocolate cookies. They are pretty tasty, if I remember. However, your recipe reminded me that I didn't make Plum Gin this year, which is something I usually do but just seem to have forgotten this summer. You get some really nice ripe summer plums, stab them all over with a fork, cram as many as you can fit into a bunch of mason jars, add a few tablespoons of sugar to the jar and then cover with gin. Then you shake up the jars to dissolve the sugar and then let them sit until Christmas-time. Strain through a seive (throw away the plums--they don't taste like anything and are mushy by this time) and decant into bottles and give away. The gin turns a lovely blush pink color and is lightly sweet and aromatic and doesn't really taste like plums but is really, really good. I got the recipe from a friend years ago whose parents are English so I guess I've been making sloe gin which they do there. It make a nice cordial on its own or you can make a fizz out of it or whatever you want. Gin and fruit: one of my favorite combos...

AntoniaJames December 7, 2009
Mmmmmm, DinnerBelle, this sounds so scrumptious! I've already transcribed your instructions and made a calendar entry for next July, when plums arrive at our Farmers' Market. Thank you!

Amanda H. December 8, 2009
I made sloe gin when I lived in France -- haven't thought about it in years! I am going to do the same thing as AntoniaJames and mark my calendar to try your gin plums in July. Thanks for telling us about it!

Kym9932 December 6, 2009
The ideas for the use of this fruit is, well endless and I just so happen to have saved some peels from sour oranges, which has the taste of oranges times 5 and since this is the holiday's I'm thinking of adding dried cranberries to the party

Judith H. December 6, 2009
Remember to sprinkle some of the sugar on each layer.

MrsWheelbarrow December 5, 2009
I'm fascinated with the idea of gin soaking fruits. It never occured to me to soak them in anything but brandy or brandy-like liquors. Gin! Juniper! What an idea! I'm trying this tomorrow with whatever dried fruit I haven't made into a cookie. Is this a Dutch recipe? Scandinavian?

Amanda H. December 7, 2009
I'm not sure where it comes from. And I haven't tried it with any unusual gins like Junipero or one of the Holland gins -- bet it would be interesting.

eatboutique December 5, 2009
I just made a big beautiful jar with... cognac. All the brandy is gone (damn eggnog) so I had to improvise. Will report back! :)

Merrill S. December 6, 2009
Sounds fantastic! (As Amanda knows all too well, I'm a bit of lightweight when it comes to the hard stuff, but Cognac is right up my alley.)

Kelsey B. December 4, 2009
My Dad, the canner, and I will definitely give this a try this weekend. Have you ever baked with the fruit after it's been marinating for a while? Like the way people bake with whiskey soaked prunes, etc?

Amanda H. December 4, 2009
No, but I've made Maida Heatter's Chocolate Cookies with Gin-Soaked Raisins (which are soaked the same way here).

AntoniaJames December 4, 2009
Wow. Marrying the juniper berry flavor of gin with the dried fruits of autumn this way is brilliant!! It's one of those combinations that makes you ask yourself, "Now why didn't I ever think of that?!!" I adore a gin and tonic, but only on a hot evening at the beach, where the salty smell of the ocean somehow makes it taste so darn good. I don't even own a bottle of gin here at home, but that is going to change this weekend. I was planning to buy a nice assortment of dried fruits at the farmers' market for my holiday baking, so the timing couldn't be better. I can see that this is going to become an instant favorite! Thanks so much.

Amanda H. December 4, 2009
The juniper is a good counterpoint to the richly flavored fruit. Enjoy!

wanderash December 4, 2009
I am in Mexico. I think I will give it a try with tequilla, peel of lime and clementine (the tree outside my house is heavy with them), cinnamon, clove and maybe an ancho chili. I will let you know how it turns out!

eatboutique December 4, 2009
I love boozy fruit of any kind. I make my own cordials but never thought to actually eat the fruit sitting in the booze. Making this tomorrow now, thank you, along with some flavored-vodka that has similar spices. So happy it's December finally (and we have a good excuse for adding booze to fruit...) :)