Inspiration for tonight's dinner: lightness and spice. With Valentine's Day comes excess and indulgence -- as well it should! Steak, lobster (plus the requisite loads of butter), silky triple-crème cheeses, and probably a good flute or two of bubbly on a Tuesday night is a wonderful thing, but it's also a treat that could use a little tempering later in the week.

Oftentimes, OD-ing on fatty, salty foods overwhelms our taste buds, and the foods that come in their wake run the risk of seeming bland in comparision. Not so with this meal. Warming and generously spiced, Roasted Carrot Soup and Mujaddara with Spiced Yogurt together make for a super satisfying, palate-enlivening dinner. 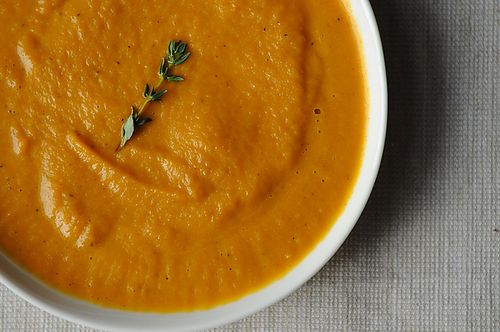 Mujaddara with Spiced Yogurt by Rivka 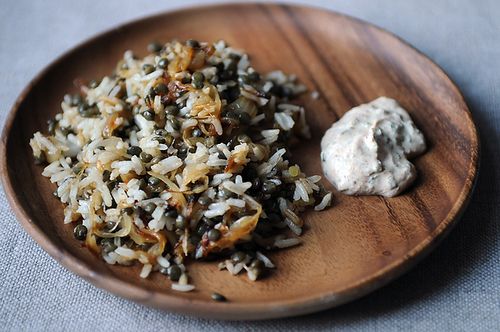 We're assuming you have olive oil, salt, pepper, garlic, onions, broth, butter, cinnamon, coriander, cumin, and a bit of lemon in your kitchen already. You're a with-it kind of home cook, you've got it together. If you're out, this is the time to stock up!

The Plan:  Both recipes happen in a number of 15 minute increments, so the trick is to try and match them up!

1. The very first thing we would do is boil the lentils for the mujaddara and roast the carrots for the soup because it doesn't matter if they sit a bit after they're done.

2. Now get the rice cooking and tackle steps #4-5 of the mujaddara recipe: caramelize those onions!

3. Did you get the mujaddara to the point where the flavors are marrying? It's going to sit for at least 15 minutes, so now is the moment to finish that soup -- puree!

Aside: We think a nibble or two of good dark chocolate and a little pat on the back wouldn't be out of place after this meal. It was pretty darn virtuous after all. Pat pat, nibble nibble. Dinner is served.