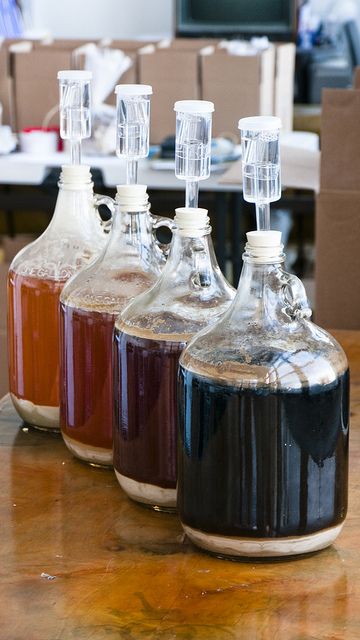 Have you bought your Brooklyn Brew Shop beer brewing kit yet? If you've watched Amanda learn to make beer, you know that brewing is full of jargon to describe very specific stages of the beer making process. We've collected our top 5 basics below -- try tossing these around next time you visit your local bottle shop.

1. Mash - This is just a mix of grains (mostly malted barley and wheat) and water. It looks like porridge, or oatmeal, or...well, mash. After it's simmered, you mash out by bringing it to a certain temperature (this is called mashing out). Then you're on to the next fancy word.

2. Sparge - The process of circulating water through the mash to strain out all the fermentable sugars from the grain is called the sparge. After this step you end up with a dark-colored liquid and a bunch of wet grain, both of which have special names.

3. Wort - It's prounced "wert," and it refers to the unyeasted liquid that will become your beer. Wort tastes kind of like a very sweet tea -- those sugars are what the yeast will digest into alcohol during the two-week fermenting period.

4. Spent grain - The grain that's left over after the sparge is 100% edible! The Brooklyn Brew Shop has plenty of delicious recipes for spent grain, from pasta to tortillas and from cheddar scones to rugelach!

5. Pitch - After adding hops during the boil (it adds that tangy, bitter flavor you love in IPAs), the wort is thoroughly cooled and poured into its fermenting container. Now you're ready to pitch the yeast, which is just an elaborate way of saying "stir in the yeast."

Now the beer is ready for its ferment, during which the yeast will eat up those sugars you strained from the grain in the sparge and make alcohol. When the fermenting is done, the beer is poured into bottles and sealed so that it develops carbonation. And when that is done, it's time to throw a party!

Beer brewing is no more difficult (and way more fun!) than a high-school science experiment when you have the right vocabulary on your side. Go forth, buy a kit, and sparge to your hearts content!

Nozlee S. March 13, 2012
(If you can't tell, I looooove talking about beer. Ask me about how I took a class of the science of brewing in college!)