Baking sheets don't generally evoke strong emotions, but mine does; it's one of my favorite kitchen belongings. My baking sheet, a shallow carbon steel rectangle with edges rolled around a copper thread, has lived with me since my early days as a cook, and has weathered every step of my career path from cook to writer to start-up founder. Unlike humans, baking sheets get more handsome with age, and this baking sheet, 18 years later, is in its prime, with a gunmetal patina, and scrapes and blackened areas in all the right places. It's so dashing that we use it every week for our Food52 photo shoots.

I bought this baking sheet at E. Dehillerin in Paris in 1996. I'd been cooking in Europe for a couple of years and saving my money. Determined to get my future fantasy kitchen off on the right foot, I made a trip to Dehillerin to outfit it with copper pans, a French rolling pin, cannele molds, and 2 baking sheets. I shipped them to my mother's house in Pennsylvania, where they sat for another year and a half, until that fantasy kitchen (tiny though it was!) became a reality when I moved to New York City.

In my Upper West Side apartment, I broke in the pans on my rinky-dink stove, flattened doughs with the rolling pin, and baked hundreds of cookies on the baking sheets – most of them recipe tests for my work at the New York Times. One night I threw a dinner party with my friend Jenn at her apartment. On the menu was Jeffrey Steingarten's potato gratin, which we assembled on one of the shallow baking sheets. At the end of the evening, I left the baking sheet at Jenn's apartment, and promptly forgot about it.

A few years later, when I visited Jenn in another city, I spotted the baking sheet, and asked her where she got it. "Zabar's," she said with conviction. I couldn't bring myself to tell her -- although I am doing so now! -- that it was mine, part of the pair from Paris. But over time I grew to like the idea that we each had one of the baking sheets.

More recently, when Merrill and I started Food52, we began photographing recipe ingredients, arranged on surfaces. We hunted around for backdrops -- white plates, glass, and fabrics. Turns out that almost any ingredient, especially greens and citrus, look spectacular against the aged grey of an old, well-loved steel baking sheet. 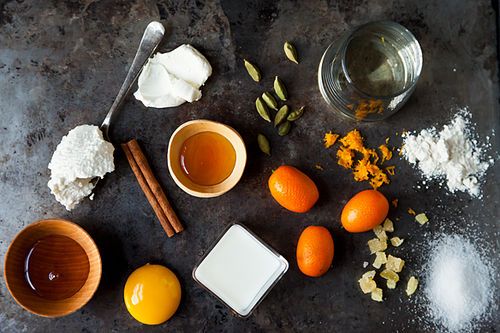 This post is sponsored by Allstate. The opinions expressed here are strictly my own.

[email protected] June 11, 2012
Your baking sheet has lived an exciting life with and without you.... but was, I'm sure, happy to return home to your arms.
Many hours I spent at Dehillerin, student ID clutched in my sweaty palm, fascinated, intimidated, and a discount exercised far beyond my one year in cooking school! Imagine the tales of every little piece in that store. Incroyable!
Author Comment

Amanda H. June 13, 2012
I have since gone back many times. Never gets old. Bought ice cream dishes there a few years ago.

J D. June 11, 2012
This is lovely. I was just reminded of when I first read your column Cooking for Mr. Latte after I moving to NYC back when. It was the thing I looked forward to the most in the Sunday Times! I miss those days, but LOVE Food 52! Bravo and keep the great recipes and food memories coming!
Author Comment

nrstrife June 8, 2012
I have two T-fal baking sheets that are at least 30 years old. The T-fal nonstick surface was very different then; it looks like brushed aluminum. Nothing sticks to them, ever. I have told my daughter that they are heirlooms and should never be given away!

Jean B. May 31, 2012
Amanda,
The photo background is so beautiful, I thought it was some great countertop. Several years ago, I left a rather new Henckel's serated knife at the home of my sister's mother-in-law. Wondered where it had gone and did not know until the following holiday season when I spied it amongst her belongings. By then, it had served time in her kitchen, although not necessarily been as well cared for as if it had come home with me. Ah well. Its twin does live in my kitchen and at least I know our friend has had the use of an excellent knife.

Amanda H. June 13, 2012
I know my own mother has found a few of her kitchen possessions in my kitchen. Whoops! Cooking forks and knives are particularly nomadic.

chefrockyrd May 23, 2012
Hysterical video. Loved it. The voice goes so well with the baking sheet too.
I have a similar one from Mafter which are now around $50!
I am attached to many of my cooking things too, but love my range the most.
Her name is "Beauty" because she is.
Author Comment

Rhonda35 May 17, 2012
FAB video! I have a beat-up baking sheet that I love, also. Mine gets a little rusty at times, so I have to do a little "polishing" every now and again, but I don't care because it's an old friend. I'm pretty sure I stole it from Mom. Really like the new sponsorship approach - yay, Allstate! - thanks for advertising with Food52. Did I tell you I met the Allstate commercial guy (actor who used to be the president on Keifer Sutherland's "24" show) - anyway, he is very handsome and that deep voice...ooo la la!!

AntoniaJames May 15, 2012
Wonderful post but alas, I beg to differ on one critical point. Humans, especially those who've lived interesting lives, DO get more handsome as they age. ;o)
Author Comment

mariaraynal May 15, 2012
I've admired that baking sheet since Food52 began. It's aged beautifully - you can see it's had a good life, in a good home. It makes me happy to know what a trusty partner it's been along the way. Lovely story!
Author Comment

amysarah May 15, 2012
Most of my baking sheets were passed along to me by my mother - who probably got them from her mother. I have a few newer 'perfect' ones, but the old pans remain my go-to's. Some might call them motley, but I say they have provenance.
Author Comment

Amanda H. May 17, 2012
Not sure if you've found this with your pans but my old baking sheet has become seasoned like a cast-iron pan. Nothing sticks to it.

skooj May 15, 2012
I would love to own a pan like that. Have been to the website and have been unable to find it. Do you happen to know what it is listed as in their website? Thanks so much. I have a cast iron pan I feel much the same way about.
Author Comment

Amanda H. May 17, 2012
Their website seems to feature only primary cookware like pots and pans, but the store has hundreds of gadgets and dishes and tools. You may want to try emailing them.

mrslarkin May 15, 2012
i love that pan, and the great photos it takes. Have borrowed that trick from time to time with my own photos.

Amanda H. May 17, 2012
Thanks -- I've been working on my more recently purchased aluminum pans, but they are determined to stay new looking.

windysiprits May 15, 2012
Love this post for so many reasons. I had a huge move recently to Switzerland and had no place to store my prized kitchen ware--so they went to a dear friend who loves them just as much as I miss them. Thanks for sharing.
Author Comment

Amanda H. May 17, 2012
Thank you, and hope you're settling in and enjoying Switzerland. Hope you'll share some of your cooking discoveries here!

Burnt O. May 15, 2012
How fun! Who's responsible for the stop motion animation and voice?
Author Comment

Amanda H. May 17, 2012
A place called the Concept Farm. We had a great time working with them.

Shalini May 15, 2012
Beautiful carbon steel baking sheet. I think yours shall get her twin back maybe. Great idea about the backdrop and I like those dancing prawns in the video!
Author Comment

girlpolish May 15, 2012
Love the video, story, and love the advertising-supporting content. I hope more blogs can do this. Is there a story about what shop you bought it at? Maybe an idea for your next book, the story of all your kitchen objects, with good sketches alongside?!

By the way, the postroll "click here" link doesn't work on vimeo. Maybe you should try wistia.com for hosting.
Author Comment

Amanda H. May 17, 2012
I bought it at Dehillerin in Paris. Thanks for your thoughts and feedback!