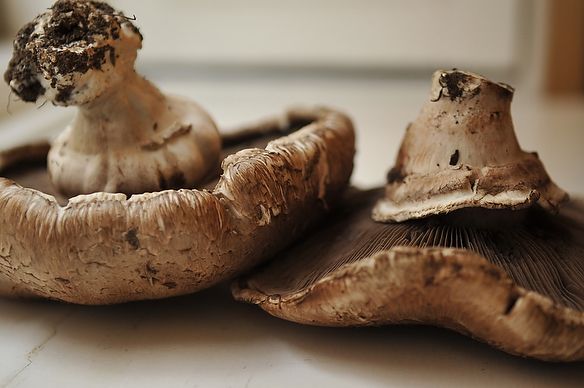 While I was studying at Le Cordon Bleu in London (too many years ago now to admit), I lived in a flat near Hammersmith with two charming Brits, both named William. Will #1 and I have connections that run deep: our grandparents were friends, as are our parents, and now the two of us. While both Williams were equally happy to devour the results of my daily practicals at Le Cordon Bleu, Will #1 shared my interest in cooking and would occasionally make supper for the three of us, much to my delight.

His meals typically consisted of simpler fare, like fat, juicy sausages roasted right in the pan with root vegetables, but every once in while he’d whip up his piece de resistance: Portobello mushroom caps topped with a rich, savory mixture of cream cheese, herbs, caramelized shallots and bacon, and then roasted. I can’t remember where he got his inspiration, but it doesn’t really matter. In my house, as well as in my parents’ (for whom he made these seductive mushrooms on a visit to the U.S. a few years ago), they’re simply called “Will’s Mushrooms.”

The following recipe is my best effort at replicating Will's mushrooms. They're easy to make, but quite rich. You’ll want to serve one in place of a piece of meat or fish, perhaps accompanied by a green salad and a glass of wine.

Serves 4 as a main course

2. Put the bacon in a small skillet over medium heat. Cook, stirring occasionally, until the bacon has rendered most of its fat and starts to become crisp, about 5 minutes. Add the shallot and continue to cook, stirring frequently, until the shallot is translucent and lightly caramelized, another 5 to 7 minutes. Using a slotted spoon, transfer the bacon and shallots to a medium bowl, discarding the bacon fat in the pan.

3. Add the rest of the ingredients to the bowl and stir gently to combine. (You probably won’t want to add any salt, but now’s the time to taste just in case.) Top each mushroom cap with about a quarter of the mixture, smoothing it so that it almost reaches the edges. Return the mushrooms to the oven and bake until the cheese starts to brown and bubble, 10 to 15 minutes. Let the mushrooms cool for a few minutes before serving.

cookepatr2 January 22, 2010
swop the bacon for fresh crab meat for a delicious treat!

shayma January 20, 2010
i agree with lastnightsdinner- creme fraiche addicts unite! i love the addition of parmesan in this recipe, binding it all together. btw merrill, if you lived near hammersmith you must have done the gastro-pub rounds a lot- there are so many gorgeous ones in that area.

Merrill S. January 21, 2010
Yes, indeed. Although the gastro-pub scene had not fully developed when I was there, lo, these many years ago.

melissav January 19, 2010
I used to make something very similar back in college in the toaster oven using cremini or button mushrooms and a little spinach. I completely forgot about them and haven't made them in ages. Can't wait to make these (and I'll get to use a real oven instead of the dorm toaster oven)!

MrsWheelbarrow January 24, 2010
I had the same thought. This was a college staple, and then an appetizer at my first dinner parties. (when the dinosaurs roamed the earth)

dymnyno January 19, 2010
Sounds really delicious. I suppose you could use Crimini mushrooms which are baby Portobellos and make this as an appetizer.

WinnieAb January 19, 2010
Love mushrooms, and this looks amazing. More creme fraiche. Too funny, Good thing I love the stuff. It's cultured so it's good for you, too :)