Ice Cream Through the Ages

We all love any frozen dessert we can get our hands on, but how much do we really know about their history?

Do you ever wonder what early ice creams tasted like, or how people managed to make them before the invention of the ice cream maker? We did. And would you ever consider using a microwave to make your custard base? One of us might. Today, we're taking a historical look at ice cream. 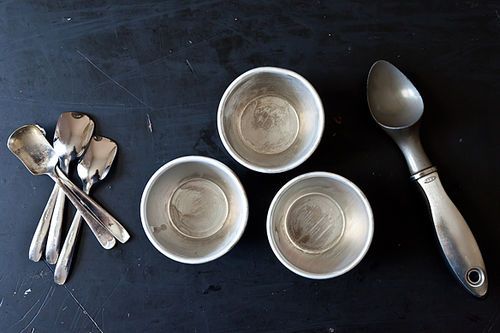 Back when anything in France referred to as "L'Anglois" was considered fashionable, a funny little recipe popped up in the cookbook L'Art de Bien Faire Les Glaces d'Office by a man mysteriously only known as M. Emy. Instead of emphasizing smoothness and creaminess -- historically the two most appealing qualities of ice cream -- this recipe called for milk, sugar, and cream, frozen solid. This allowed large ice crystals to form -- on purpose! The crystals melt immediately as you eat the ice, giving a tingling sensation on the tongue (hence the "pin" reference in the title). It was considered a novelty back then, and we'd have to agree.

Don't let the name "fromage" in the title fool you, however; cheese ice creams didn't pop up until 1817.

The oldest sorbet recipe we could find also dates back to the 18th century -- a time when frozen treats were only made for royalty and aristocracy because ice and cream were rather expensive. In a cookbook called Il Credenziere du Buon Gusto, Vincenzo Corrado included several recipes for sorbets, but the one that really that stuck out to us is his Sorbetto di Candito d'uova, or Egg Candy Sorbet. The recipe calls for thirty (30!) egg yolks and thirty-six ounces of sugar syrup. He suggests flavoring it with cinnamon water or oil, but that's optional. We usually think of sorbet as fruity and egg-free -- but back then super sweet and super rich were all the rage. 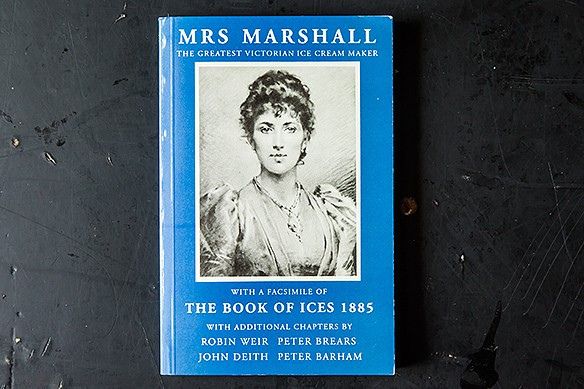 Let's jump ahead to Victorian England and take a look into the life of Mrs. Agnes B. Marshall, a prominent ice cream monger who did a lot to bring ice cream to the masses. Mrs. Marshall patented her own ice cream maker, and tinkered with using liquid nitrogen to make ice cream. Her Book of Ices includes a recipe for "Cornets with Cream," which may be the first publication of the ice cream cone.

But our favorite recipe is the ice cream Mrs. Marshall gave the title of "Cheap." It consists of four ingredients: cornstarch, sugar, whole milk, and vanilla extract. The exclusion of eggs and cream makes this recipe not only "cheap" but easy to make too, since there's no need to worry about overcooking a custard base. Thanks to Mrs. Marshall, cooks of all skill levels and economic standlings were able to enjoy frozen desserts made in their own homes. For that, we raise our ice cream cones to her. 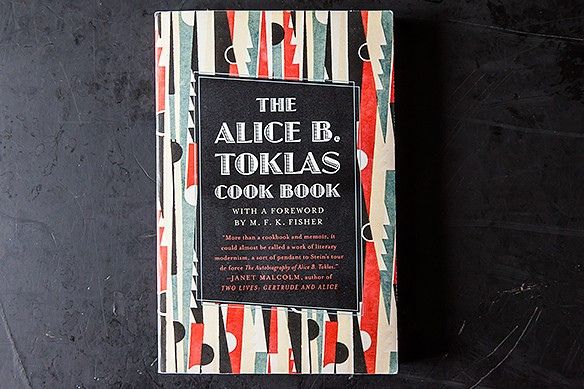 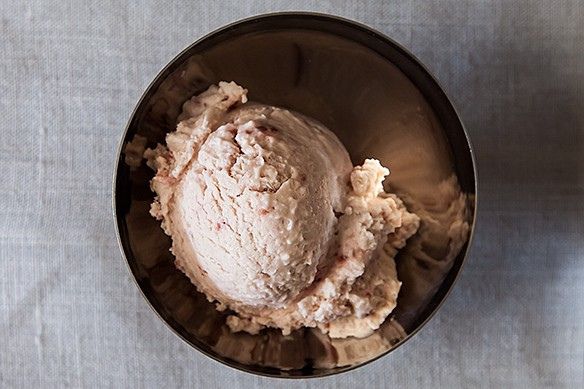 The Alice B. Toklas Cook Book was published in 1954, but includes recipes from much earlier. There's a chapter called "Treasures" -- we think everyone should think about recipes this way -- and naturally, ice cream and other desserts appear early in the chapter. Her explanation for this is simple: "My collecting of treasures began with Sweets ... For when one is young, that is what interests one most; the rest follows. So this is one of the earliest."

Toklas grew up in San Francisco in the 1880s and her treasured ice cream recipe came from her mother's cook, Nora. Nora's recipe requires no cooking and no churning, just some whisking and folding, and it's only four sentences long. Want to see it? Here it is:

We made this recipe in the test kitchen and are happy to report that it tastes great, but its texture is more like mousse than ice cream. It's also very rich, almost buttery, and "coats your tongue the way custard coats a spoon" as Kenzi put it. We'll attribute the heaviness to the whole pint of cream (which is fun to whisk by hand). Nora's ice cream tastes old-fashioned, and if you're interested in that kind of thing, we suggest you try it. 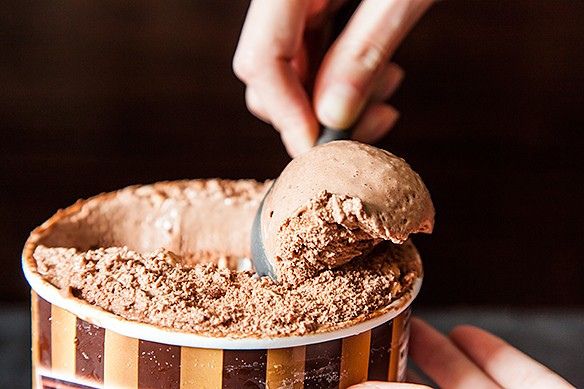 Toasted almonds and marshmallows mixed in with chocolate ice cream? Genius, we know. The combination of chocolate, almonds, and marshmallows was born first in a Rocky Road candy bar -- and was later adopted by William Dreyer, the Professor of Advanced Ice Cream Manufacturing at the University of California in Davis, in 1929 (yes, that profession existed). The flavor has been an American bestseller ever since. Since cutting up marshmallows was such a pain for Dreyer, a supplier began developing mini-marshmallows solely for the purpose of being mixed into ice cream -- and yet another American classic was born.

Remember when microwave cooking was all the rage? People even found a way to make ice cream -- yep, ice cream -- in the microwave. You make a custard base in the microwave, just like you'd make on a stove, then cool it and freeze it. If you watch your base like a hawk, you can even make it with eggs, but cornstarch is usually the safer option.

Written by: Brette and Kristy

We bond over our shared loves for old recipes and bagna cauda.

Cinnamin September 20, 2012
This is why I love Food52!! You guys bring so much to the table. This was a wonderful read. Ice cream with 30 egg yolks sounds more than just rich- it sounds decadent! And oh, I want to travel back in time and be Prof William Dreyer! Delightful read, guys :)

Alexandra H. August 26, 2012
I highly recommend Elizabeth David's book "Harvest of the Cold Months: The Social History of Ice and Ices"! It's am amazing and engaging cultural history of ice itself, granitas, sorbet, and ice cream. Really fascinating to see how ice/ice cream was woken into our gastronomy centuries before electricity or refrigeration. I first read it over 20 years ago, and (sound culinary-nerd-alert here) it is truly one of my favorite reads ever!

mrslarkin August 26, 2012
Haven't tried it yet, but I would totally use the microwave to make ice cream!

Dtown B. August 25, 2012
Ice Cream, one of lifes soothing pleasures. I remember being a kid and our neighbor would make homemade ice cream every 4th of July, strawberry, vanilla, peach one flavor every year. It was like Christmas!!! We would sit around watch him make it(drooling) eat it all up then light fireworks way into the night. the epitome of summer. Memories I cherish still for over 30 years now!! I live for ice cream (or good beer)! Thanks for the great article.

I've been making ice cream for such a long time I can hardly remember when I started, but I too remember the enormous hand-crank model my aunts and uncles (farmers in Central Illinois) would break out for family feasts in the summer. For years that was the only kind of ice cream freezer that was readily available, but I had no room to store one, and who was going to eat all that ice cream? (I mean, I possibly could have, but not a good idea...)

My first freezer was an electric Hamilton Beach model that used ice cubes and table salt and made 2 quarts of goodness. We used that one until it died. I know that had to have been back in the 70's.

Kristy M. August 24, 2012
That book is going on my list. Thanks! Love the memories of ice cream makers of the past -- Brette and I have it easy flipping switches on Amanda's machine.

laura W. August 25, 2012
ChefJune, thanks for the kind words about Ice Cream: A Global History. Kristy, loved the story. One aspect of ice cream history that's often overlooked is the history of ice and of refrigeration. The early ice cream makers you mention had to rely on ice from lakes, rivers and ponds to make their ice creams and to keep them frozen. It wasn't until the early 20th century when artificial refrigeration became widespread that ice cream really developed into a mass market product and flavors like Rocky Road became widely available.

Creative C. August 23, 2012
I've been making ice cream since I was a little girl; when we all shared the hand cranking duties once or twice a summer to get something magical for dessert. Fast forward to electric ice cream makers and the relative ease but still, a bit messy with that ice cube and salt business.

This year...the new self contained units that make it so easy? I might have overindulged just a bit. Sorbets with fresh seasonal fruit, gelatos with a bit of booze (oh my good) and my latest? The search for my favorite ice cream from childhood typically made only by small local dairies...Butter Brickle. I'm in love. I could make it every single day but with heavy cream, half and half, brown sugar, butter and toffee...I probably shouldn't huh?

Love the history; prophetic as my latest post is my own ice cream history!

ChefJune August 24, 2012
Not too surprising. It was told by an Itallian who has an Italian-name for just about every invention known to humankind. ;)

ChefJune August 23, 2012
Interesting info. Did you look into Italian history at all? Stories I've heard say that Caterina de 'Medici brought ice cream with her to France from Italy when she married Henri II -- or at least, her chef did.