The Best Way to Cook Beets 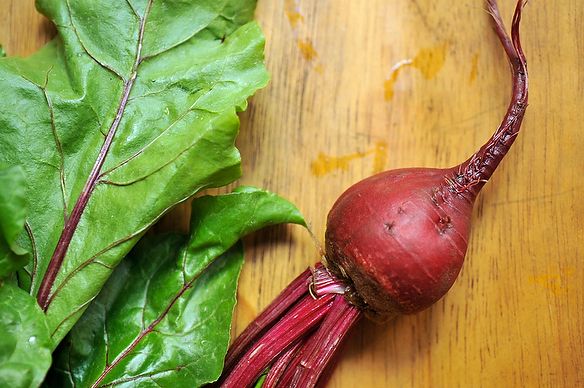 The trick to successfully cooking beets is to soften them while also concentrating their sweet flavor. Roasting beets can result in something akin to jerky. Boiling them will produce soggy sponges. The best cooking method I know comes from Tom Colicchio, who wrote in The Craft of Cooking about roasting beets in a foil packet. His way, the roasting condenses the beets' sweetness while a layer of steam inside the packet keeps them moist.

The technique's as easy as can be.

2. Cut off the leggy root (seen above) and the tops (here's a great recipe for the leaves: Pink Greens). Then scrub the beets if they're dirty.

3. Lay a large piece of foil on a baking sheet, leaving half the foil hanging off one end. Place the beets on top of the foil on the baking sheet. Sprinkle the beets with olive oil -- just enough to dress them like salad greens -- and season with salt and pepper. Fold the foli in half to make a packet and crimp the edges.

4. Bake until the beets are tender (you can check by piercing a fork through the foil). It usually takes 40 to 60 minutes, depending on the size of the beets. Let them cool in the foil packets.

5. When the beets are cool enough to touch, remove them from the packet and peel off the skins -- they should slip off like Concord grape skins.

What to do with your perfectly roasted beets? Oh, where to begin! Here are 3 ideas:

1. Cut the beets into small wedges and toss them with Greek yogurt and Meyer lemon zest and juice.

2. Slice the beets into thin circles, arrange in a cluster on a flameproof pan, cover the beets with thin slices of Camembert and broil until the cheese melts and begins to toast.

3. Cut the beets into tiny cubes, dress them with a sharp mustardy vinaigrette and spoon them atop a tuft of mache, frisee or baby arugula. Serve with roasted salmon (this one perhaps!).

Kay B. October 31, 2021
This works beautifully. I’ve been compromising by steaming them, but this can be difficult when there’s a lot to do. I had to harvest a whole bed of Cylindra beets a couple of days ago as they were ready to bolt, so decided to try this method. Sorted the beets by size and roasted them in three separate pans. Skins slipped off so easily. Now ready to be transformed into Spinach, Goat Cheese and Beet Filo Parcels and Pru Leith’s Beet, Lime and Coconut Soup.
Thank you!

Foodie July 3, 2021
Strongly disagree. I grew up with beet borscht. Always boiled; never spongy. If they are spongy- they are old.

Paul T. November 29, 2020
I traveled, worked and lived in Russia and Kazakhstan. Beets are a mainstay. Try this: roast, peel, dice the beets. Add a can of sweet corn (or frozen), 2 or 3 diced dill pickles (I prefer zesty but Gershin or other varieties work well), 1 can peas (or frozen), 1 can garbanzo beans, 1/2 to 1C chopped onion, 3-4 cloves garlic chopped, 2T chopped olives.

(Variation, as above, add any or all: 2 lg boiled carrots diced, 4-5 boiled potatoes skinned & diced, 4-6 ozs sauerkraut). You can’t go wrong combining these ingredients to your taste.

Kate November 15, 2020
What's the point of seasoning the outside of the beets if the skins are going to be removed anyway? Isn't the seasoning going to be removed with the skin? In the interest of reducing use of foil, how about baking in an oven-proof glass dish that has a cover? Anyway, thanks for the article - I'm ordering some organic beets from the farm right now!

Stephanie A. January 1, 2021
I line the aluminum with parchment paper. That way, no aluminum touches or reflects off my food, but I am still able to enjoy the benefits. I use this technique for tenting too.

Avi C. October 13, 2013
These suggestion usually only work partially for me; I like to cook them whole, but we get large beets, so they don't always cook through. So my contribution to this talkback is this: try the slow cooker. I leave them in for 4 hours on the "high" setting with about 5cm of water. After 4 hours, I turn the cooker off, but leave the lid closed. after an hour or two, they peel easily, and are cooked through.

Benoit August 10, 2013
Can beets be frozen,can,they be jar in just water and salt,
If I seal my jars.

Peanut February 1, 2010
Peirino, I wonder if you could use radish tops in a soup like this one, Provencal Greens Soup (http://www.nytimes.com/2009/03/17/health/nutrition/17recipehealth.html, or a revised version of this recipe at http://www.happyhealthylonglife.com/happy_healthy_long_life/2009/03/provencal-greens-soup.html)?

pierino February 1, 2010
This is close to the method I deploy myself. Some years back I was in Chicago and cooking for good friends. My California friends, including my sister hate beets. So I was relieved when my buddy Erich said "I love beets." We rocked on that because he is a cook too. I will add that beet and horseradish is a match made in heaven. Erich's wife and daughter loved them as well.
But now I'm trying to figure out what to do with radish tops. I've got an abundance. I'm thinking some sort of soup....help?

Aliwaks January 29, 2010
OOH beets.. I love this method, I have Craft of Cooking and used it when I made beets 3x a week for work.

made a beet risotto in class yesterday (had to make a risotto & short ribs, so did beer braised shortribs w/ fresh horseradish gremolata, beet risotto, quick pickled raw beet salad w/ poppy seeds + horesradish cream w/ more poppy seeds..wish we had the beet greens but alas not so much)...

Amanda H. January 29, 2010
Hope we'll get to see some of those recipes here on the site! Love the idea of fresh horseradish gremolata.

wanderash January 29, 2010
I usually put them whole (skins on-- there's good flavor and vitamins there) in a baking dish with a little water, a splash of vinegar, a sprinkle of salt and cover the whole thing with foil. yummers!

Phyllis S. January 29, 2010
I usually wrap beets individually in foil. Thanks for the tip. I will try Tom's method.

gluttonforlife January 29, 2010
I love my roasted beets with greens and goat cheese, tossed with walnut oil, lemon juice and some chopped toasted walnuts.

Amanda H. January 29, 2010
I'm starting to think Merrill and I should consider doing a beet theme.

TheWimpyVegetarian January 29, 2010
I've also peeled and cut them into wedges before roasting in foil packets. Once I put them in the foil packets, I sometimes use olive oil drizzled over them, but more recently I've been drizzling maple syrup or honey over them, coating them well, and then sealing up the packet. The roasting time is immensely shortened, you don't have the sometimes messy peeling process to go through, and they come out sweet and tender. Mmmm, I might need to do some for lunch today...

Amanda H. January 29, 2010
Interesting -- do you peel them with a vegetable peeler? I want to try them with honey.

TheWimpyVegetarian January 30, 2010
Yes, I use a veg peeler. Whether I use maple syrup or honey, when I open the packets there's some great beet juice and syrup/honey. I reduce that on the stove a bit to get it more of a syrupy consistency (only takes a minute or 2) and pour that back over the beets. Then I add different toppings ranging from creme fraiche with horseradish to goat cheese. Sometimes with chopped mint. Sometimes with a splash of balsamic vinegar in the mix. I love beets as you can see as I'm going on a bit too much on this I'm afraid.....

CatherineTornow January 29, 2010
And lunch is served! Arugula and foil-packet-roasted-beet salad, maybe with chevrie. Thanks for the tips.

LisaHarper January 29, 2010
I agree-this exactly how I've always done my beets, but I'll often squeeze half an orange--or a little juice--over them, too, before roasting. For me, it's been foolproof, but that may also be the good baby beets we're lucky to have out here much of the year. We often roast a big batch on Sunday and keep them around for a few days for a quick side for the kids--w/goat cheese, arugula, orange or blood orange... or in a tiny dice dressed w/white balsamic & served on appetizer spoons. They look like little jewels.

Amanda H. January 29, 2010
They're a big hit with my kids, too. And I love beets with blood orange and a spicy green.

dymnyno January 29, 2010
I have used this method whenever cooking beets...it is indeed foolproof for delicious beets. Last Saturday I had a beet salad in Yountville that was composed of small cubed cold red and yellow beets that surrounded a large lump of creamy burrata. It was devine...subline...delicious!

TheWimpyVegetarian January 29, 2010
That sounds fabulous dymnyno! Where did you go?

dymnyno January 29, 2010
Bardesono is a new hotel in Yountville...it is very "green". It was raining so we were not able to enjoy the beautiful outdoor spaces and fountains.

TheWimpyVegetarian January 30, 2010
I'm going to have to make it up to Yountville and try this new place in the next couple weeks - hopefully without the rain! My former career for the last 20 years was in the green industry so would love to check out what they've done with the hotel along with the food. And I agree with Amanda - there's not enough burrata in my life. Or beets, apparently.

deensiebat January 29, 2010
I'm with you on the shortcomings of roasting and boiling. But I usually circumvent them with a combination -- peel and cut the beets into thick wedges (big pieces help avoid the jerky phenomenon -- 4-6 wedges per beet, depending on size), par-boil til they're barely tender, then toss with oil and roast in a hot oven to finish. You get the sweetness of caramelization (along with the sweetness of beets), but the par-boil means the beets are roasting for a shorter time, so they don't dry out.

Kira S. September 27, 2020
Since I love beets but have only ever had them jarred, this will be a new try for me. In case I fail, are there any redeeming qualities to beet jerky?? A good hiking snack, perhaps? Hahaha!

aargersi January 29, 2010
Thank you for this! I absolutely love beets - now I need to run out and buy some and roast them ... the ones in the garden aren't ready yet. Would some kind Food52-er please post a borscht recipe? I have made it a couple times but it wasn't very good ... (maybe we need a recipe request spot, because clearly you guys don't have enough to do already - HA!!!!)