Homemade Mayonnaise with a Twist 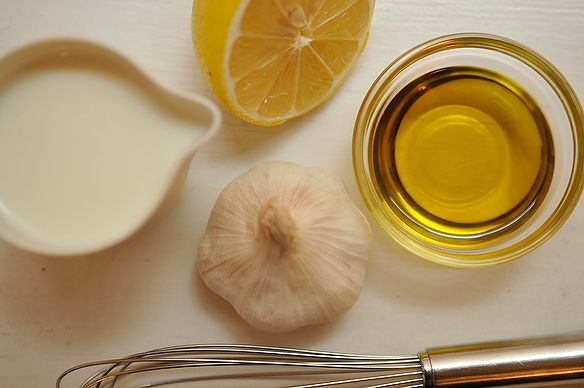 On a trip to Spain about a decade ago, I encountered a pillowy white condiment that no matter how I describe here won't sound nearly as exciting as it was at that moment: the sauce was a mayonnaise made with milk and oil and not a trace of egg. It was silkier and lighter than regular mayonnaise, more like a glossy Italian meringue that tasted like olive-oil-whipped cream. I put it on my mental "story ideas" list, where it lived for the next ten years, happily buried between "Morton vs. Diamond Kosher Salt" (don't even think of touching this matter of national import!) and "Vietnamese minced chicken salad" (which was recently "scooped" by Julia Moskin at the New York Times).

I hadn't bothered to write about the milk mayonnaise because I hadn't a clue how to make it, and apparently getting out some milk, oil and a blender was much too taxing to do on my own. Just a few days ago, I heard that David Leite, the founder of Leite's Culinaria, had a recipe for the sauce in his book, "The New Portuguese Table." (And soon after, he informed me that Kathleen Purvis at the Charlotte Observer was planning to write about it; you can read her fine story here.) Ugh!

Like a good(ish) sport, I sucked it up and made David's recipe. Four times. (I'll save you the painful details: don't go off-road here, use an immersion blender or a blender, like he says.) And on that fourth try, I had something reveletory: sauce that had the texture of buttercream and the clear flavor of an infusion. There was fragrance from garlic, tang from lemon juice, and silkiness from the butterfat emulsifying with the oil.

David learned the recipe from Ilda Vinagre, a chef in Portugal (who, in turn, had learned it from a cook in Brazil). Following Ilda's lead, David likes to mix in green olives; ginger; sun-dried tomatoes; and smoked paprika. I'm happy with it plain.

And although I wish I were less of a procrastinator, I'm happy that David wrote about the mayonnaise first. For one thing, I would have never figured out the technique. And for another, Leite means milk. And Mr. Milk should own the milk mayonnaise story.

Adapted from "The New Portuguese Table" by David Leite

Combine the milk, lemon juice, garlic, and pepper in a 2-cup glass measuring cup. Using a handheld blender (or a blender), buzz on high for 30 seconds until frothy. With the motor running on high, slowly pour in the oil a few drops at a time, and gradually increase this to a fine thread, moving the blender up and down, until the mixture thickens lusciously and resembles a soft mayonnaise. You may need more or less oil. Season with salt to taste. The mayonnaise will last up to 1 week in the fridge.

darksideofthespoon May 8, 2013
Oh wow. I'm making the Smoked Lentil Salad right now and only just noticed our Mayo jar is scraped clean. This is a wicked replacement! Magical how it thickens!

sstratmann October 13, 2010
so, this is probably a very dumb question, but beyond being deeelish, is this also a good lunch-box sandwich mayo? i'm desperate to find a way to send mayo on the sandwiches for my kids, without poisoning them. seems this may be OK...?

Amanda H. February 10, 2010
We don't have a photo but it looks like very white mayonnaise.

mountainchef February 8, 2010
Hi Yalda,
Can you enlighten Me and Amanda as to what a Salad Olivier consists of?

AJohnson February 8, 2010
I'm so excited to try this. I've developed a severe egg-intolerance, and have mourned the loss of mayo. This is going to be great! Thank you!!

Kym9932 February 7, 2010
a side about mayo and eggs. If possible get eggs that have been laid the day you buy them and have never been refrigerated
that is the real important part. Once the egg has been refrigerated then it starts to die, but if never refrigerated then it just hangs out waiting to be sat on, because of course the egg still says alive because it wants to be a chicken.
I've kept mayo for three weeks using only fresh laid eggs...but I'm no Scientist, just IMHO

Kym9932 February 7, 2010
I love the sound of this mayo also, but question
why can't you do it in a food processor and use the plunger (which has a hole in it) to pour in the oil?

Amanda H. February 8, 2010
David Leite says you can do it in a mini food processor. I think the idea is that the liquids need to be emulsified on high speed in a compact area and in a large food processor, the milk and oil would get flung around too much. But I haven't tried it, and it may be worth testing it at least once.

mountainchef February 7, 2010
Love the sound of this Mayo. Am also intrigued by the Salad Olivier some folks have mentioned. What is this?

campagnes February 7, 2010
I can't wait to try this, but a quick question first: You specify using a blender or immersion blender - do you think this would work with a high-powered food processor? I don't have either blender, unfortunately. Thanks for sharing this!

dawnviola February 7, 2010
I'm so excited to be reading this because I'm allergic to soy and can't buy prepared mayos...and making mayo myself is sometimes not high on my list of ways to use an egg yolk. I'm glad to see this alternative.

But, knowing what I know about emulsions, how does this stay together without separating for up to a week?

Amanda H. February 8, 2010
I probably shouldn't have included that storage detail because I haven't tried it myself, but that is what David Leite says.

Mac February 6, 2010
Just tried this recipe with what I had on hand. I used 2% milk and sunflower/vegetable oil. I added a dollop of greek yogurt and it thickened up beautifully. I turned it into a dill mustard sauce for our dinner tonight.

DianneV February 6, 2010
I had this in Madrid with Spanish Tomato Toast (pan con tomate) and have wanted to duplicate it .I knew it wasn't quite aioli--I think this recipe solves the recipe puzzle. Thanks!

Amanda H. February 10, 2010
Interesting -- in some ways it's more versatile than mayo because it's lighter/cleaner.

clotilde February 6, 2010
For me, part of the appeal is that a milk-based mayo should keep a lot longer: when I make a classic mayo in my household of two, it's a real challenge to use it up before we feel it's no longer safe to eat, because of the raw egg yolk.

Yalda February 6, 2010
I'm with you Azita, this will be great in Salad Olivier.

Mayo is one of those condiments that is so versatile in my kitchen and the whole family loves it, so it'll be a real culinary coup if I can nail a good homemade version. I'm going to give this a try this week.

melissav February 5, 2010
Glad you didn't wait another decade to share this. This sounds great! I can't wait to give it a try.

Amanda H. February 5, 2010
Good luck and have faith -- it'll come together, even though it seems like it won't.

Veronica February 5, 2010
Amanda--absolutely delicious and even easier to make than it sounds. Going to serve with seared tuna tonight. Thanks so much, again!

Amanda H. February 5, 2010
I can't believe you made it already -- how cool! And I love the idea of it with seared tuna. I'm going to have to try that. Have a great dinner.

Veronica February 5, 2010
Thank you, Amanda. This sounds too good to be true! And a great story to go with it. Can't wait to try, so heading for the kitchen...now!

Azita February 5, 2010
Thank you so much for this recipe. I've been looking for a recipe like this since I started making salad olivieh . It's just perfect!

Amanda H. February 5, 2010
Great, enjoy! And I think David Leite includes other variations in his book, The New Portuguese Table -- check it out, if you have a chance.

SueonFood February 5, 2010
If I had some whole milk in the house, I would make that this very second. It sounds like a revelation. I wonder if I could mix heavy cream with 1% milk. I find it odd, though, that the recipe doesn't use ALL olive oil.

Amanda H. February 5, 2010
That seems worth trying. I talked to David Leite about the oil, and he thinks that olive oil is just too strong and heavy. And it makes sense to me -- when I make regular mayo, I always do half vegetable (or peanut) oil and half olive oil.