A Simple Bolognese for Grownups and Babies

This week, it's all about texture. 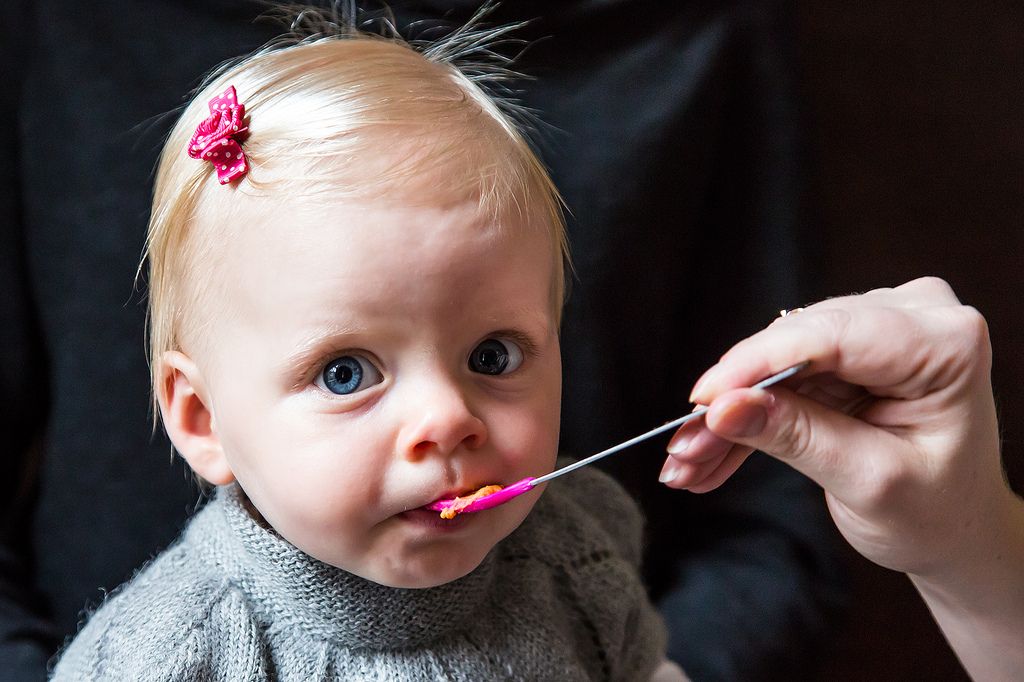 Texture is a hot topic for the baby feeding crowd. Some believe that until your baby has a full set of teeth, you should only give her the softest of purees. Others say the fear of choking has been blown out of proportion.

Before we started Clara on solids Peter Steinberg, Charlie's dad, sent me a link to this fascinating blog post about baby-led weaning, which shows a video of an 8-month-old (also named Clara) cheerfully feeding herself apple slices. We weren't sure about starting out by letting Clara feed herself entirely, but it gave us some ideas.

For the first few weeks, I pressed cottage cheese through a sieve so that she wouldn't struggle with the curds. Pretty soon, though, it was clear that she was developing a sort of half-chewing technique, mushing the cottage cheese around in her mouth before swallowing it. When I gave up the sieve Clara quickly and enthusiastically adjusted, curds and all.

The same was true with the vegetables I cooked for her. I went from pushing slow-cooked carrots through a sieve to mashing them roughly with a potato masher, and Clara seemed to like the challenge of gumming the veggies now that they had a little more heft. 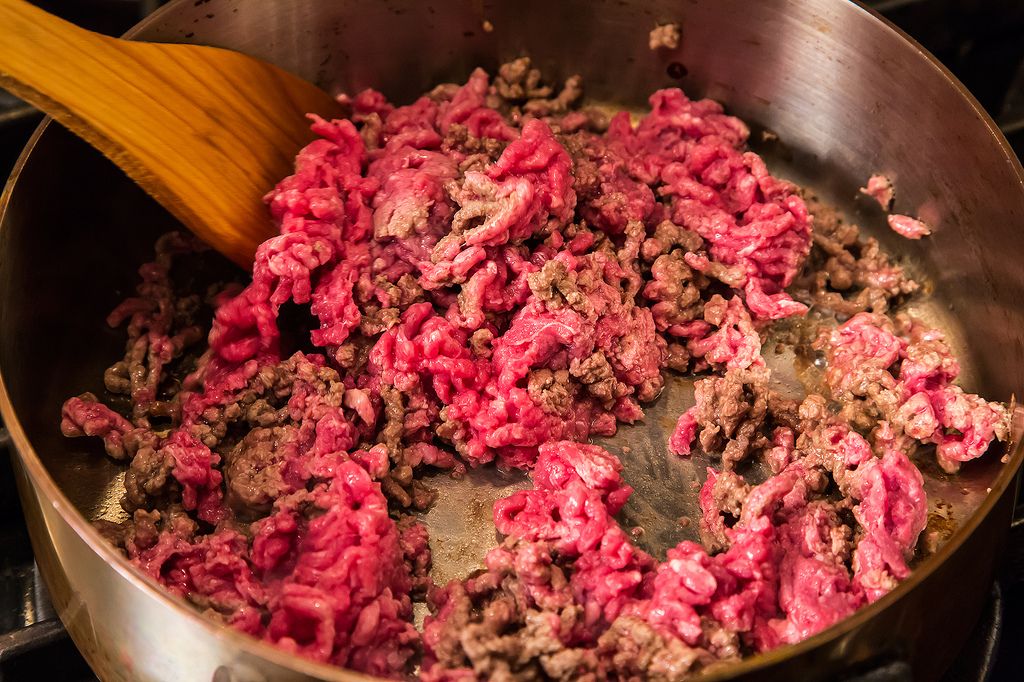 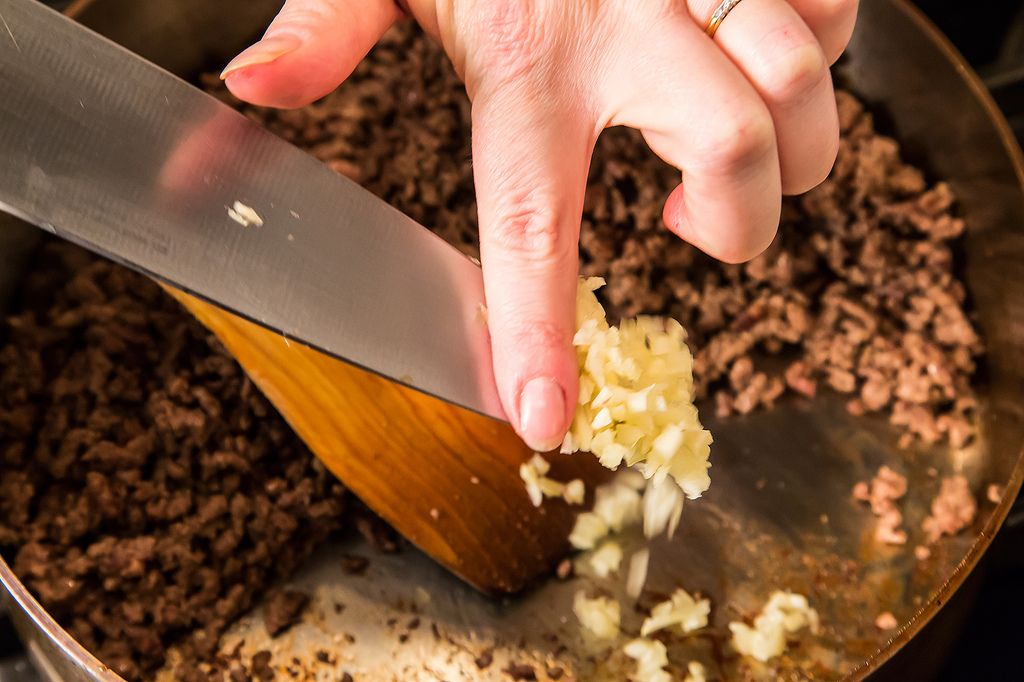 The real payoff, however, came when we moved onto meat.

If you haven't pureed cooked meat before, I don't recommend it. Basically, you end up with cat food. But ground meat can be browned and simmered slowly with a little olive oil, garlic and plain stock or water for a baby with a few weeks of eating under her belt. A couple of important guidelines: 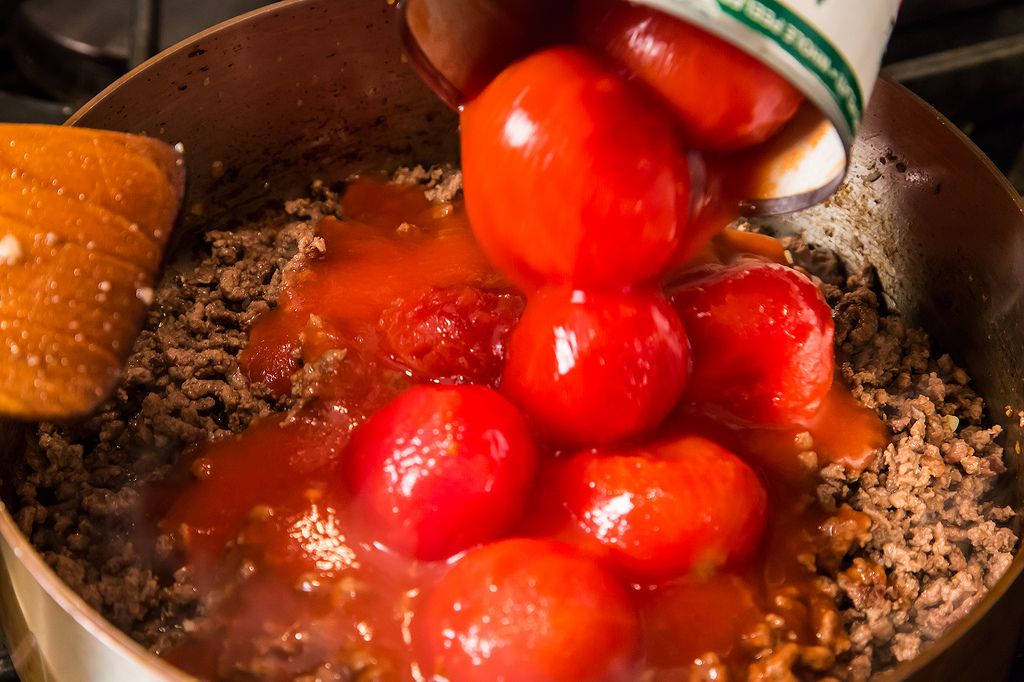 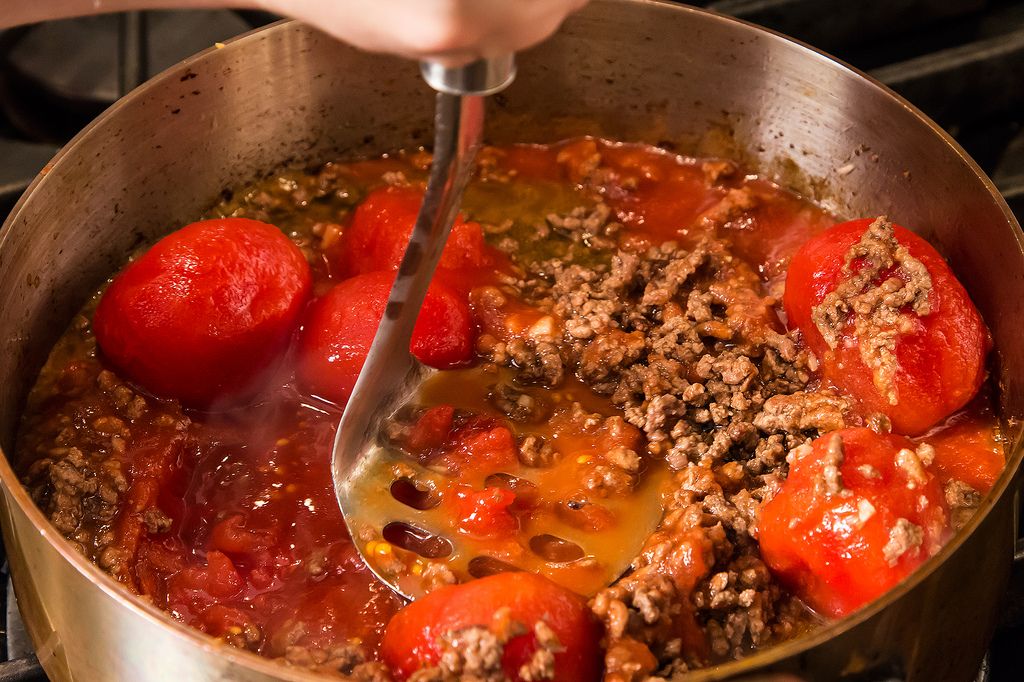 Recently I added tomatoes to the mix, and Clara had her first Bolognese. Because we didn't need to puree it, we were able to enjoy the Bolognese with rigatoni, while she ate it with pastine (those adorable little pasta stars you're always looking for an excuse to buy). 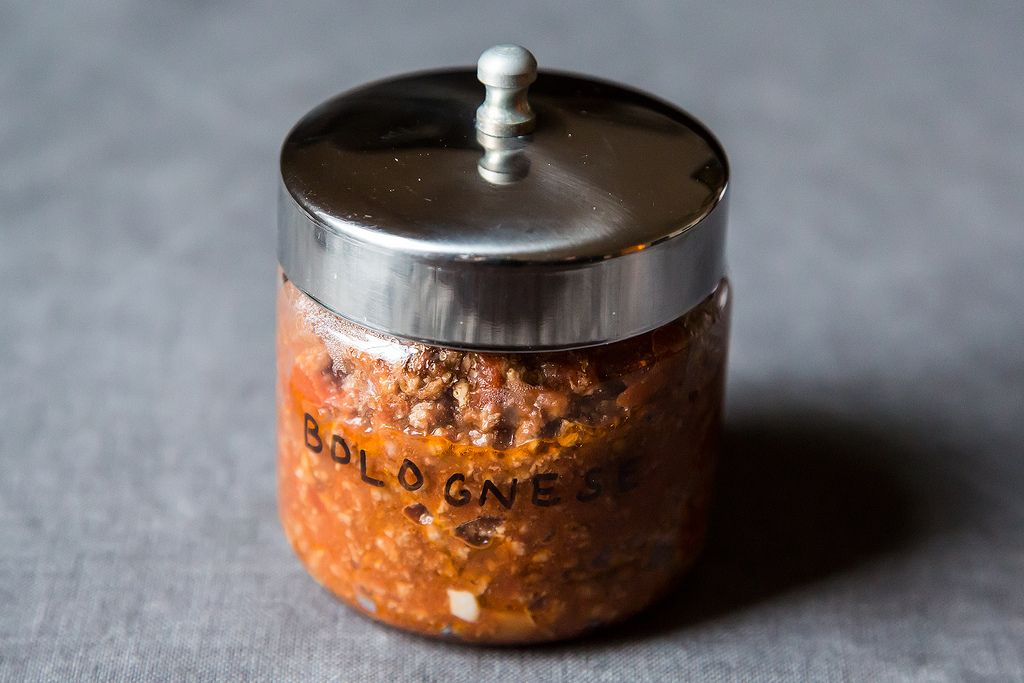 A Simple Bolognese for Grownups and Babies

Serves 4 as a main course, baby for several days

Here's a recap of the 2 other recipes I've written about so far that are good for babies in their first couple months of eating solid foods: 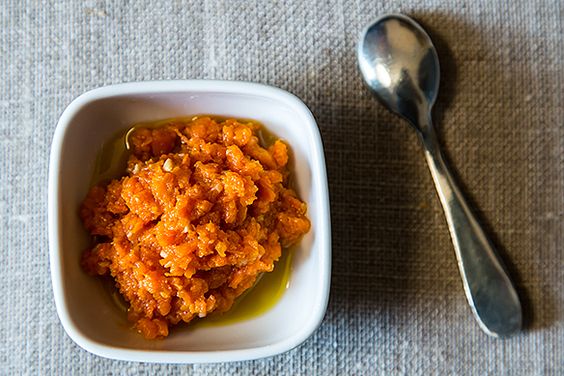 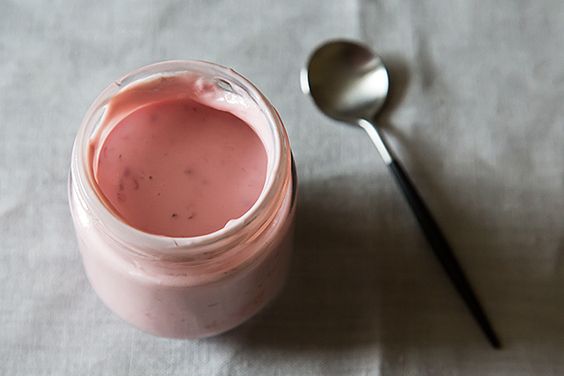 Suzanne B. January 14, 2020
I actually do not believe that this baby eats this way all the time. Or if she does, that she will not suddenly rebel at 2. "No thank you, Mommy, I don't like that. I have never tried it before." (Screaming fit to follow if a little is put on the plate with other food.) I tried all of the types of things Merrill described forty-five years ago, and my son was still either fasting or eating white food when he got old enough to drive and get french fries at fast food. In fact, he called me when he was 35 or so to report that he had tried fish. He still will not taste fresh tomatoes. He grew up perfectly fine, even though he spit out every carrot or banana I ever mashed up for him. This is baby by baby. His younger sister ate everything!

softenbrownsugar October 23, 2012
Love, love, love the Clara food articles (and her cute little food-tester face).... I always send them to my Daughter-in-Law so she can make the recipes (or get ideas) for our own beloved little Clara! Thanks, Merrill.

wanderash October 21, 2012
i love this series! i have a 4 yr. old and a 1 yr. old and we are finally all (sort of) eating the same thing-- albeit slightly deconstructed for the 1 yr. old. we all ate tom's tofu stir fry last week. i am going to make bolognase this week. keep the inspiration coming!

mariaraynal October 21, 2012
A terrific series - makes me want an pretty little baby like Clara to cook for. I can't help but wonder if feeding her food with a little texture early on will help prevent the aversion to texture so many kids seem develop as toddlers.

Elycooks October 21, 2012
Oh my, Merrill. Clara is just too adorable. My kids are teens now but it's so fun to re-live the baby years with you!
Author Comment

JadeTree October 18, 2012
Merrill, this is so much fun to read. My girl is now 15 months and she loves your Weeknight Ragu with linguine and your mashed potatoes and parsnips! It's just delightful to see a child eating good food, isn't it?
Author Comment

Bevi October 17, 2012
Merrill - I am really enjoying your Cooking for Clara features. It takes me back to the days when I cooked everything fresh for my 2 kids from the time they could eat solids. I often used a plastic food mill to break down cooked solids - it was so easy to clean and my most important kitchen tool at the time. I got fancy with Shepard's Pies, pasta (and I loved to use the pastine), and all sorts of vegetable purees. This takes me back.

And Clara is just adorable.

healthierkitchen October 17, 2012
Merrill - Clara is just gorgeous whatever she's eating! I can't believe it, but I have no idea anymore what my kids age ate at that age.

jvcooks October 17, 2012
Such a sweet face -- she's adorable! When I use to make baby bolognese for my boys I would grate a carrot into the sauce for a little sweetness. My guys loved it -- maybe Clara will too :)
Author Comment

LazyVeggie October 16, 2012
That face could sell me any recipe! She is beautiful.
Author Comment

Lucy October 16, 2012
This is not an appropriate recipe for babies when using pre-canned tomatoes. The FDA has banned food containers for infants and young children with BPA ( http://www.nytimes.com/2012/07/18/science/fda-bans-bpa-from-baby-bottles-and-sippy-cups.html?_r=0 ) due to concerns about BPA's endocrine disruption and effects on brain development and behavior. Canned tomatoes are especially high in BPA because of the way the acid in tomatoes causes the BPA in the lining of the can to leach into the tomatoes. While this recipe looks tasty, it should be used only with tomatoes from tetra packs or glass jars of tomatoes.
Author Comment

Merrill S. October 16, 2012
There are plenty of brands of canned tomatoes that do not use BPAs in their packaging: http://livingmaxwell.com/bpa-free-cans-organic-food. And of course, there is always Pomi.

Lucy October 16, 2012
Yes, Pomi is a tetra pack. If you read the article that you just posted, the only brand that has BPA-free tomato cans is Muir Glen (and not all of their cans), which is hardly "plenty of brands".
Author Comment

Merrill S. October 16, 2012
This is clearly an issue you feel strongly about, but I don't think this is the appropriate forum. There are canned tomatoes (and packaged tomatoes) that do not contain BPAs -- people can make decisions accordingly.

Second, your mention of pastine really brings back memories. It was a big staple for my kids at that age - and long after. Sometimes with a little tomato sauce, or chicken broth, but most often with a knob of butter and grated parm stirred in. They also liked it with some small curd cottage cheese (or ricotta) mixed in, and a spoonful of sugar sprinkled over the top. It's still one of my college senior daughter's comfort foods - when I went to visit her in her first apt., sophomore year, there was a box of pastine on her kitchen shelf. Reassuring for her - and me.

Droplet October 16, 2012
When your hair accessories match your spoon and you eat pastina, you have got to be a connoisseur at heart :)

Kitchen B. October 16, 2012
Well said! Colour coordination at its finest.

EmilyC October 16, 2012
That's a very sweet pic! My daughter will be ready for bolognese soon -- I'm hoping it's a hit. I recall adding a little yogurt to bolognese when my son was a baby, but then again, adding a little yogurt was my solution to everything! Want "creamed" spinach -- add yogurt! Want "creamy" squash -- add yogurt! You get the idea! : )
Author Comment

Merrill S. October 16, 2012
Thank you! I actually cooked some spinach the other day with the idea of making "creamed spinach" with yogurt, so will do that tonight!

mrslarkin October 16, 2012
Hooray for Clara! Prepare yourselves for the day when she will want to feed herself. It's gonna get messy, but fun! I think I always had a damp dish towel at the ready.

When my teenagers were babies, which seems like exactly yesterday, pasta bolognese was one of their favorites. I'd whirr it in the mini chopper...perfect baby food!

AntoniaJames October 16, 2012
Bolognese was a favorite of both my boys at that age. I minced a carrot , which I added with the onion. They both enthusiastically enjoyed a light touch of grated parmesan or pecorino as well. Also, I haven't looked at the video you linked about self feeding, but I do remember both boys insisting on being given a spoon to hold while we were feeding them. Of course, they got in on the action as they tried to feed themselves, which was one of the most hilarious things I've ever witnessed. ;o)
Author Comment