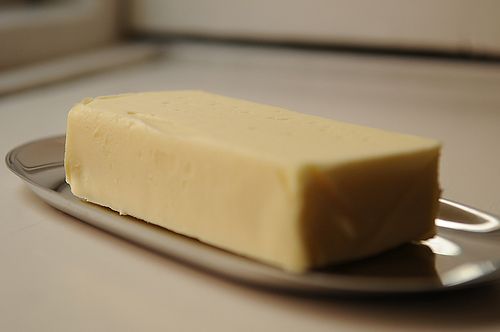 I once heard that Martha Stewart's favorite baguette in New York was from Le Pain Quotidien. (This was way back when, before Pain Q had blossomed into the organic Belgian pastry empire it is today.) Now, credit where credit is due: I agree that they put out a superb French stick (as the Brits rather amusingly call it). It's tender within and crusty without, with that clean, floury-but-not-yeasty chewiness that only the best baguettes manage to pull off. But ever since I ordered my very first Baker's Basket, I've been convinced that all of Pain Q's bread exists primarily as a vehicle for the butter they serve with it.
I'll admit I'm a true butter lover. I'm not one of those people who spend five minutes shellacking a layer of butter as thin as parchment on each slice of bread, working the knife back and forth like a bricklayer with his trowel until the butter is perfectly even. No, I'm a slatherer. Always have been. I'm not happy until I can no longer see the surface of the bread beneath its creamy cap of butter.
You can imagine my surprise that first time at Pain Q when I discovered that the salty, creamy blob of dairy fat I had been excavating from its little rectangle of foil and delightedly plastering all over my organic spelt slice was not from France -- or even from Vermont for that matter. None of this highfalutin 99.9% butter fat stuff. Nope, I discovered that I had just been nearly swooning over butter made by none other than the cooperative of farmers at Organic Valley.
Let me just say outright that this butter is a revelation. It has precisely the right amount of salt, is a lovely pale straw color and boasts a silkiness that would rival a sow's ear. I look for Organic Valley butter everywhere these days (unfortunately, it is somewhat elusive), my eyes perpetually peeled for that sky blue box peeking out at me from the dairy shelves. I told Amanda about it, and several weeks later she was served some delicious butter at a dinner party. When she asked what it was, I think you can guess what the response was. Yep, Organic Valley.
When I do manage to get my hands on it, I never use it for cooking -- although I have no doubt it could give Plugra a run for its money in a bake off. For me, that would be the equivalent of squandering a bottle of Château Pétrus on coq au vin. Instead, I let the butter come to just below room temperature (spreadable but still cool) and then use it for something simple: bread and butter with peppery radishes and coarse sea salt, or freshly baked banana bread cloaked in a generous swathe of the stuff. Another favorite is the cucumber and butter tea sandwich, which my mother made frequently when I was a child. I recommend you seek out some Organic Valley butter and make some of these delicate little sandwiches yourself.
Cucumber and Butter Tea Sandwiches
1 English (seedless) cucumber
2 slices white or wheat sandwich bread (preferably Pepperidge Farm Very Thin)
good quality salted butter, at room temperature
salt and freshly ground pepper
Peel the cucumber and cut 8 thin rounds. Spread one side of a slice of bread with about 1 teaspoon of butter and arrange the cucumber in overlapping rows over the butter. Sprinkle the cucumber with salt and pepper to taste. Butter the second slice of bread and make a sandwich. Slice off the crusts and cut the sandwich into 3 equal rectangles. Eat, accompanied by a glass of homemade iced tea or white wine.
Serves 1.
- Merrill

Rachel G. September 29, 2011
I use Kerrygold Butter for everything . Both Salted & Unsalted. In fact I was fortunate enough to be a guest on the Martha Stewart Show last year and we talked 'IRISH BUTTER' . That is how I make my Irish Butter shortbreads, the recipe to which I have posted on this site! Would anyone like the video link?

Nancy J. July 2, 2009
Thanks for this. I'm always on the hunt for good butter. I'll also pass it on to a friend whose dog eats whole sticks in one gulp!

Abs June 16, 2009
I just ate toast with organic butter that was definitely not Organic Valley...how disappointing!

Veronica June 12, 2009
I can assure you, no white wine with your cuke sandwiches...the mothers, well "yes" maybe they had a sip or two!
Author Comment