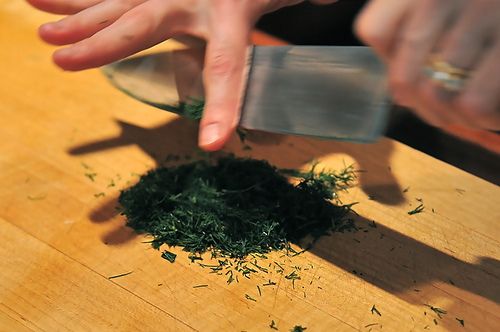 Bavarian cuisine has gained a real toehold in New York City as of late. Trendy new restaurants like Seasonal and Radegast Hall are dishing up heaping platefuls of brats, schnitzel and goulash. Brooklyn even has it's own brand-new Schnitzel Truck, which announces its current location via Twitter.

Although the schnitzels and various wursts usually get top billing, Bavarian fare would be nothing without its side dishes: tangy German potato salad, braised red cabbage, creamy or pan-fried spaetzle, soft pretzels with spicy mustard, and crunchy cucumber salad. This last dish is a particularly welcome addition to what is often a hefty, meat-dominated meal. In fact, cucumber salad may be the only typical Bavarian dish that one can truly call "delicate."

Recently, in search of something simple and light for a barbecue, I decided to try and replicate the restaurant cucumber salads I'd been enjoying so much. I knew that the cucumber should be sliced thinly, and from experience that salting the slices before adding the other ingredients would coax out some of the juice and keep the salad from being watery. Plenty of dill and some caraway seed were also a must. Finally, the salad needed some red onion and a light, tart dressing.

Normally, I would soften the sharpness of the onion by soaking it in some cold water, but a quick internet search directed me to this nifty suggestion by Food & Wine's Melissa Rubel: if you soak the onion slices in the vinegar for a while, you end up with a light pickle, and the dressing becomes infused with onion. Melissa's recipe calls for sherry vinegar, an idea I liked and probably wouldn't have thought of myself. I decided to use a mixture of sherry vinegar and rice vinegar to keep things sprightly.

Happily, the resulting cucumber salad was a very respectable imitation of restaurant versions, and the barbecuers certainly seemed to enjoy it. Keep in mind that you should serve and eat this promptly, as the cucumber goes limp in a hurry.