Chicken All Jazzed Up 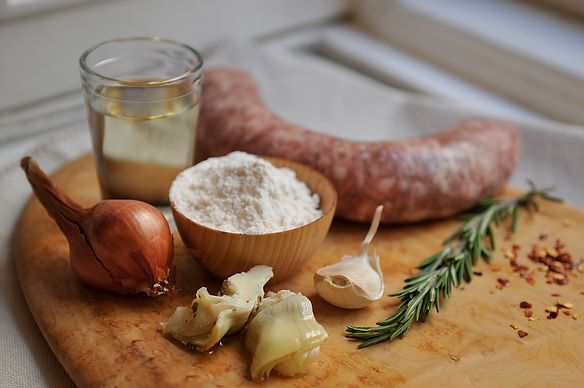 Recently my fiancé, Jonathan, and I went on a double date with his mother, Charlene, and her fiancé, Maurice. It was Jazz Night at Colucci’s, an old-school Italian joint in Northern New Jersey just down the street from Charlene’s apartment (also Jonathan’s childhood home); Charlene had gone to high school with the owner, Joey, who greeted all of us -- even me, whom he’d never set eyes on before -- with a big hug and a smile, and a bellow of “AVVOCAT!” for Jonathan, who is an attorney.

We ordered antipasti and economy-sized glasses of the house white, and the headliner for the evening, a locally renowned jazz guitarist wearing a black fedora emblazoned with his name in sparkling rhinestones, addressed the crowd. He informed the small but attentive audience, seated at a cluster of small tables covered in white cloths, that while his main pursuit was the jazz guitar, he also dabbled in vocals; he plucked out a couple of classic tunes and then launched into what ended up being a fairly exhaustive survey of 20th century American music -- heavy on the Sinatra and Motown, it also included a couple of Bee Gees numbers and a rousing version of “Brick House” (to which Charlene and I shimmied alone on the dance floor).

Because of Jonathan’s previous descriptions of Colucci’s, I’d anticipated an entertaining evening -- and I certainly got it. What I didn’t expect was great food. Although the foil-wrapped butter pats were ice cold (as Jonathan had told me they would be), and the salad laced with pallid wedges of out-of-season tomatoes, my entrée, Pollo Scarpariello, was somewhat of a revelation. Tender morsels of chicken breast and chunks of sweet Italian sausage swam in a simple white wine, mushroom and sundried tomato sauce, reminding me of a dish I used to make regularly when I was just getting into cooking as a serious pursuit. I’d dredge bite-sized pieces of chicken breast in flour and brown them in a big pan, along with slices of sausage. Then, using the browned bits of flour in the pan, I’d make a slightly thickened white wine, shallot and rosemary sauce for the meat, brightening it with lemon juice and a pinch of hot pepper and folding in artichoke hearts right at the very end. Sometimes I used green olives instead of artichokes, and sometimes the sausage didn't make it into the recipe, but the technique of coating the meat in flour before browning it always made for a velvety, rich sauce that cloaked the chicken with its fragrance.

Below is an updated version of the recipe, using bone-in chicken thighs, which I prefer these days. Feel free to use small pieces of white meat if you'd like -- just make sure to brown them quickly and reduce the sauce before adding the chicken back to the pan for just a few minutes at the very end.

1. In a large sauté pan, cook the sausages in 1 tablespoon of the olive oil over medium heat until brown on all sides, 10 to 15 minutes. Turn off the heat, transfer the sausages to a cutting board and let them rest for 5 minutes. Cut the sausages into diagonal slices about 1/3 of an inch thick. Turn the heat back up to medium and brown the sausage slices well on both sides, about 3 minutes per side. Remove with a slotted spoon and set aside.

2. Put the flour in a shallow bowl and season it with salt and pepper. Sprinkle the chicken thighs liberally with salt, dredge them in the flour and dust off any excess. Add another tablespoon of olive oil to the pan, and then the chicken pieces, skin side down. Do not crowd the chicken – you may need to do this in two batches. Turn the heat up to medium-high, but keep an eye on things to make sure nothing burns. Brown the chicken on both sides, about 8 minutes total, remove and set aside.

4. Add the white wine and the rosemary sprig and cook until the wine is reduced by half, scraping up all the nice brown bits on the bottom of the pan. Add the chicken stock and the chicken pieces, skin side up. Bring the liquid to a boil, then lower the heat so it’s just simmering and cook uncovered, turning the chicken pieces once, until the meat is cooked through and the sauce has thickened, 15 to 20 minutes.

5. Remove the rosemary sprig and discard, then add the sausage and the artichoke hearts to the pan, stirring gently to immerse in the sauce. Taste for seasoning and add more salt if necessary. Simmer for a few minutes more to warm the sausage and artichokes, then squeeze the lemon over everything and give it one more stir. Serve immediately with roasted potatoes or a simple risotto.

AntoniaJames March 14, 2010
One other thing . . . My son, who before dinner declared that he doesn't like artichoke hearts, said afterwards, while raving about how well the dish turned out and declaring it a keeper, that he thought the artichoke hearts "were very tasty." I think the sausages, which provide a rich flavor to the oil used for the aromatics and chicken, and therefore to the sauce, are the key to this dish. Love it!!

Liz March 14, 2010
I can't get enough artichoke hearts! Definitely on the menu for next week!

Merrill S. March 14, 2010
Let me know how it goes! Fyi, AntoniaJames' cooking notes below might be of interest.

fineartdaily March 14, 2010
Thanks - this will be perfect tonight. I was in a chicken rut.

AntoniaJames March 12, 2010
Made this last night for the dinner party -- leap of faith of course as I hadn't test driven it first -- and was so pleased, as was everyone else. Huge raves. I turned the heat off and covered the pan right at the point in the instructions where it says to cook for 15 to 20 minutes, and let it sit on the stove for about 45 minutes while doing other things in the kitchen, then simmered for about 30 minutes and it turned out beautifully. Served with roasted potatoes, roasted carrots and roasted Brussels sprouts and the simple apple cake taught to me by my Italian host mother (which I've tinkered with over the years of course). Wanted to make a crostata (Maria Teresa Jorge's) but client demands on time did not permit. Will post soon the recipe for the appetizer I created, using some feta that I just *happened* to have in the fridge . . . . . Anyway, Merrill, thanks for creating the recipe for this easy, spectacularly tasty dish!!

Merrill S. March 14, 2010
So glad to hear it was a success. Using thighs instead of white meat makes this dish so much more forgiving, and I'm sure the longer cooking time made them nice and tender. Thanks for sharing your technique for holding the dish when you have company!

AntoniaJames March 14, 2010
Holding the dish also allowed the juices from the sausages to flavor the sauce more. The sauce was so tasty!

CatherineTornow March 10, 2010
I'm not sure which one I want more . . . the rhinestone fedora or these chicken thighs!

coffeefoodwrite March 10, 2010
Great recipe (and story) Merrill! Love the technique of dredging meat in flour, then browning and adding wine. I make a stew using the same process and it really works great. I can't wait to try this. The artichokes look great (but the olives tempting as well...!)

lastnightsdinner March 9, 2010
Man, this sounds good, and perfect for a weeknight meal. Also, I've been artichoke-obsessed lately... something about them just reminds me of springtime. Maybe a theme option?

Teri March 9, 2010
Is anyone else gaining a little extra weight this year? :)

AntoniaJames March 9, 2010
Merrill, how heavy are the four Italian sausages, combined? We have two or three different sizes in the butcher counters here, depending on where you shop. Thanks!

mrslarkin March 9, 2010
Yum! Yet another recipe I can make on the stove top. Thank you Merrill!

AntoniaJames March 9, 2010
Excellent! What a great recipe, and what a wonderful story. I learned quite at the last minute that we'll be entertaining on Thursday (yes, day after tomorrow . . . . . Mr. T likes to keep my life interesting by making dinner party plans, chez nous, on very short notice without consulting me), so this solves one problem -- what to make -- quite nicely. You saved my day, Merrill!!

Merrill S. March 9, 2010
It was one of the most entertaining evenings I've had in a long time. What I neglected to mention is the fact that the "dance floor" was hopping for most of the night!

amysarah March 9, 2010
Sounds delicious. Big dredger here too - that tiny bit of flour clinging to the chicken makes a big difference. Usually I just use AP flour (always handy), but sometimes I keep Wondra around for dredging - its superfine grind works really well. Speaking of old time grocery items that still have huge appeal - love that you use jarred marinated artichoke hearts here - very appropriate for an old school recipe and I have to admit that I've never lost my love for them, from when I was a kid and they were a 'delicacy' - like tinned smoked oysters. (Not the same as fancier ones from a seaside smokehouse - just a whole 'nother thing ;-)

Merrill S. March 9, 2010
Same here! I love a fresh steamed artichoke with vinaigrette for dipping, but I still have a fondness for the jarred variety. Wondra is a great option too.

SallyM March 9, 2010
Love your story Merrill and can't wait to try the chicken - my kids don't like bones, so i'll make it with boneless, skinless thighs and hopefully they'll eat it - thank you!

MrsWheelbarrow March 9, 2010
Oh my gosh, this looks heavenly. Going into this week's rotation immediately. BTW, I recently came upon grilled artichoke hearts, vacuum packed and refrigerated, at Whole Foods, and I expect I'll substitute those.

Lizthechef March 9, 2010
Nice tip re the ones at WF, Mrs. WB and thanks, Merrill for a terrific story and on-my-fridge-to-make recipe.