Today: We sit down with John Sunsdstrom, owner and executive chef of Seattle's beloved Lark restaurant, to talk about his new cookbook and iPad app, spring produce, and -- of course -- Triscuits. 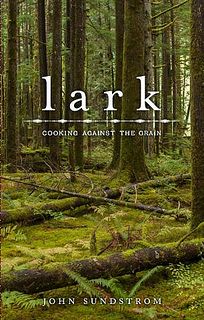 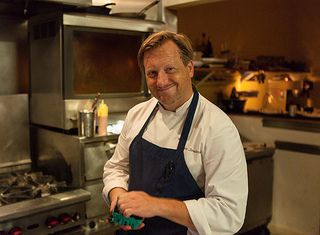 Often, cookbooks that are heavily rooted in place contain recipes that are inspiring to look at, but unrealistic to prepare at home. John Sundstrom -- owner and executive chef at Seattle's Lark -- has successfully broken that mold with his new cookbook. Lark: Cooking Against The Grain is full of ways to reproduce a little bit of the Pacific Northwest in our own kitchens, each page nudging us to fall in love with the region a little more. With funds raised through Kickstarter, and an iPad app that pushes the boundaries of traditional cookbooks, John has found ways to use new media to share his brand of cooking -- and foraging, and eating -- with home cooks everywhere.

After perusing the new book and daydreaming about nettles and mountains and tall trees, we gave John the 5 Questions treatment. Read on to hear what he's looking forward to eating this spring, why he's excited about the iPad app, and how much he loves Triscuits. We're with you on all accounts, John.

Your cookbook is divided into seasons specific to the Pacific Northwest -- you call them Mist, Evergreen, and Bounty, each with their own character. As you near the end of the period of mist, which spring produce are you most looking forward to cooking and eating?

After several months of cold, murky weather and a heavy rotation of root vegetables, potatoes, and diminishing lists from my farmer friends, I'm getting antsy for some green. The first thing to fill the void is stinging nettles, which are just starting to be brought in by our foragers. We'll be serving Quinault steelhead with creamed nettles and baby leeks any day now. Next come wild watercress and Miner's lettuce, both newly accessible as the snow in the Cascades begins to melt. The spicy, crunchy cress will be the perfect counterpoint to a rich piece of smoked mackerel or herring. Other greens to look forward to are the baby pea vines, delicious as a salad or quickly sautéed. And then there are the spring onions and green garlic, so adaptable and easy for sprucing up a dish, be it a haunch of roast lamb, or a simple spaghettini.

You've worked in a variety of kitchens, from chopping mushrooms and peeling onions at a Benihana-style restaurant as a teenager to managing the kitchen of an upscale hotel. Is there one professional experience that has had the most influence on the way you cook and run a restaurant today?

If there's one thing I've learned about restaurants over the years, it's that the best ones are much like a family, complete with all of their inherent perfections and flaws, triumphs and failures, functions and dysfunctions. Usually messy, but with its heart in the right place. My 6 years working at Dahlia Lounge really brought this home for me. I've been inspired by many great chefs and restaurants around the world and tried to set my professional standards as high, but the Dahlia Lounge taught me about making people happy through my craft, in the dining room and behind the scenes.

It seems that more and more chefs are moving into self-publishing and apps. What inspired you to release your cookbook as an app as well? What is your favorite feature included in the app?

I think there are just so many possibilities open for reaching people and expressing ideas with new technology. It seemed that with the rapid expansion of tablets in people's daily lives, there was a huge opportunity to get to market on the leading edge. And since we were producing the material anyway, we could plan well and have it ready to go into multiple formats and platforms. I'm a list maker, so the shopping list feature is great, and you can e-mail it to yourself or to someone else. I also love the "life in the Northwest" video vignettes; they really capture the feeling of each season, and will make you miss home if you're from here, or make you want to visit soon if you're not.

How did you go about translating restaurant-developed dishes into recipes that a home cook would feel comfortable making in their own kitchen? Which recipe in the book are you most proud of?

My goal in presenting the recipes was to stay true to what we really do at Lark, while scaling down most of the recipes, and carefully explaining many of the techniques in a way that would help the home cook be just a little bit more comfortable and confident in the kitchen. We had a team of seven recipe testers: a former cook, a culinary student, several busy parents, and a retiree, all working through several rounds of testing and feedback. We also shared "Roughcuts" of the recipes with our Kickstarters, and asked for comments from them as well. There are so many amazing cookbooks out there, but it seemed there was room for one that would bridge the gap between the 'seen it before' and the 'impossible to make.' Many of the recipes are quite accessible, and I've at least warned the reader about the really intense ones!

You've just worked a long day, you get home, and you're hungry. What do you cook for yourself?

I almost never cook after I get home. If I'm lucky, [my wife] JM might have left some dinner out for me; she's a wonderful cook. But if not that, it'll be a bit of cheese, and some rosemary Triscuits (they are seriously very tasty!) to go with a beer or glass of red wine. Though I have been bringing home way too much Jamon Iberico lately...naughty, very naughty.

On my day off it'll often be lamb chops (my family loves them), or a ribeye with roasted potatoes and a big salad or some sauteed spinach.

Kenzi W. March 5, 2013
I love this. And the book looks beyond beautiful. Thanks for the post!