Winner of Your Best Cheap Feast

Winner of Your Best Cheap Feast

Congratulations to fiveandspice, whose "Greek" Lamb with Orzo won the contest for Your Best Cheap Feast! 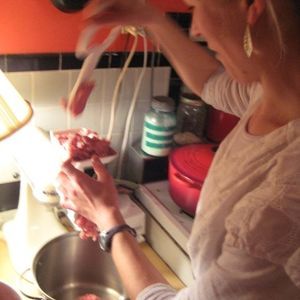 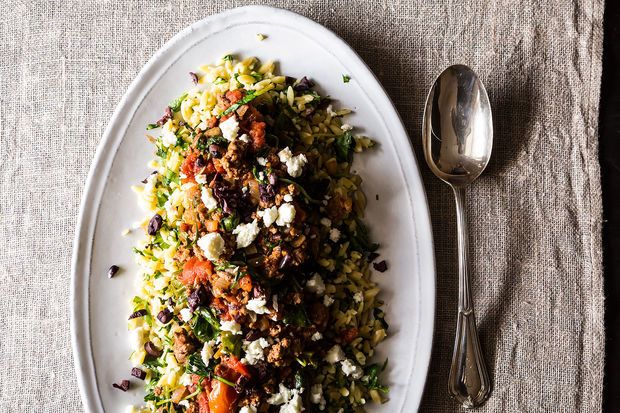 Fiveandspice in the kitchen, left, and the winning dish, right.

1. Describe an early food experience that has influenced the way you think about food and/or cooking.
So many things! My mother is a good cook and always, always had us sit down to a home cooked family meal at dinner time, even when my brothers and I were at the ages where we kicked and screamed about it. Especially important were meals at holiday times, which were the exact same every year, and we would look forward to them all year long. Every year we would also go to Norway to visit all of our family, and there we had another set of meals we would have every year, ones with special ingredients that just weren't the same in the United States; we'd have meals like shrimp evenings, "flintstone steak" (a type of marinated porkchop), and the smooth, perfect fish cakes from the fish market. Having these rituals, I think, shaped so much of my passion for cooking and eating well, and especially for sharing meals with others.

2. What's your least favorite kitchen task?
I really don't enjoy picking the leaves off of and washing fresh herbs, even though it's 110% worth it every time. Also, I'm afraid of my food processor. It's a really great one, but it's so big and scary and powerful (in my opinion), that I avoid using it a lot of the time because I have these fears that it might come alive and turn on me.

3. Your favorite kitchen tool?
A good sharp knife. Nothing compares.

4. What is your idea of comfort food?
Norwegian meatballs and gravy. Or a really great soup with crusty homemade bread.

5. What is your greatest kitchen disaster?
Well, I frequently make big messes in the kitchen. But I'd say my biggest disasters are the times I set things on fire (yes, times). The worst was when I was home from college for my youngest brother's confirmation, and I was baking the desserts for his party. I was making an apple cake, and I had put it in a springform pan that turned out to have a bad leak. The batter dripped out all over the bottom of the oven and promptly caught fire. It was an impressive conflagration, though thankfully we could contain it pretty well by keeping the oven door shut. Unfortunately, however, the entire house wound up being full of smoke minutes before guests were supposed to arrive. We threw open all the windows, and let the house fill with fresh -- but below freezing -- air. Everyone had to keep their coats on for a while, and the cake did not survive. Good thing several other desserts were already done.

krusher April 7, 2013
Congratulations. Well deserved win. I cooked it for a family of 5 for their dinner last week and I voted for it. It was a great hit. Lamb is my red meat of choice. I had lamb shoulder minced by my butcher as I waited. With the spices, it settled into the long, slow simmer very well. I loved the orzo with the olive oil, lemon juice and finely chopped parsley. All in all quite lovely. Thank you.

fiveandspice April 10, 2013
Thank you so much! I think lamb is my favorite red meat. We get ours from a local farmer and it's so nice to have that connection, like getting to watch your butcher. That's awesome!

lighthouse6 April 6, 2013
I am obsessed with the recipe. I ate it every day for 4 days. I changed it a tiny bit by deglazed my pan with some good red wine - couldn't help it the bottle was open : ) It really added a nice depth to the lamb. I used swiss chard, oil cured olives because I love their strong flavor (my kids didn't) and a harvest grain mix from TJ's because I had it in the pantry. Great recipe - very yummy!

fiveandspice April 10, 2013
That's so wonderful! Thank you! And of course, how could you possibly resist an open bottle of wine! :)

carswell April 4, 2013
I printed that recipe yesterday and bought ground lamb. I'm going to make it this weekend. I can't wait.

Midge April 4, 2013
Big congrats!! I'm glad I'm not the only one intimidated by food processors. I love my mini one though.

fiveandspice April 4, 2013
Thanks Midge! I totally think I need a mini one to supplement my gargantuan one. I bet I would use it a lot more. We may have to form an intimidated by food processors support group, and then MrsLarkin can be our therapist.

fiveandspice April 4, 2013
Thanks so much healthierkitchen! Enjoy!

mrslarkin April 4, 2013
Congrats 5&S! Looking forward to trying this one! I so love your writing. You're a pleasure to read. Also, use your food processor! If you need, I will coach you.

fiveandspice April 4, 2013
Thanks so much MrsL! That is so sweet of you! Also, I seriously could use the coaching with my food processor. A skype session maybe? ;)

hardlikearmour April 4, 2013
Congratulations, 5&S! How wonderful that you were able to visit your Norwegian roots so often growing up.

fiveandspice April 4, 2013
Thanks Sara! I didn't realize it at the time, of course, but we were incredibly, absurdly lucky as children to get to travel there every year. It gave us a pretty cross-cultural upbringing.

cookinginvictoria April 3, 2013
Congratulations, f&s! This is such a wonderful recipe. I have already made it twice for my family. So happy to see you in the winner's circle. Loved your Q&A too. It's wonderful reading about your Norwegian roots, and I'm with you when it comes to washing and destemming fresh herbs, which is one my least favorite cooking tasks!

fiveandspice April 4, 2013
Thanks CIV! I'm glad you've been enjoying the recipe! And I know we're not the only ones who hate dealing with herbs. :)

gingerroot April 3, 2013
Congratulations on your win, Em! I'm thrilled for you and as soon as I can track down some gf orzo (also thought about millet, though it definitely change the texture/flavor a bit), this is dinner.

fiveandspice April 4, 2013
Thank you Jenny! You could use gf orzo if you find it, but I bet quinoa would also be good, or actually, you could even try rice. Any of them would change the flavor, certainly, but I bet it would still be great.

Kitchen B. April 3, 2013
Congrats fivenspice. My daughter has been writing diamante poems and we've been looking for more words to describe fires. Conflagration is GREAT!!!!

fiveandspice April 4, 2013
Thanks so much KB! And so happy I could provide you with a little thesaurus action. People used to call me thesaurus sometimes when I was little (I'm sure you can just imagine how obnoxious I was, but I couldn't help it, I looooved vocab words!).

aargersi April 3, 2013
YAY and CONGRATULATIONS! I knew it - such a great recipe. I am sorry for the loss of your cake though :-)

fiveandspice April 4, 2013
Thank you Abbie!!! You're the best! :) Congrats again on your awesome dish as well! Once we're home from Denver, it's going on the menu ASAP. And yes, we did have to mourn the cake for a while. But, we eventually got over it.