Tortilla with Chive and Garlic Aioli 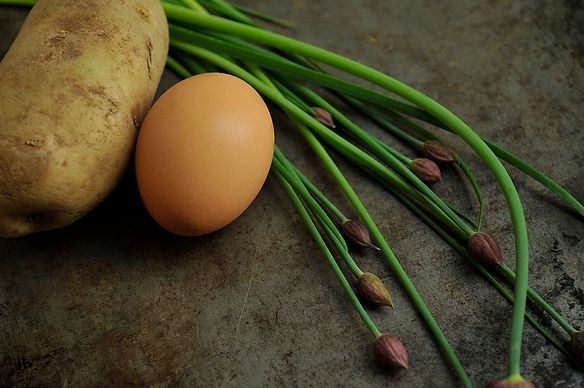 Sorry, guys, I was sleeping at the wheel last week. I woke up on Friday morning, proud and liberated that I'd finally finished the edit of my Times cookbook, and promptly realized that I'd totally forgotten to write my weekly cooking column here on food52. Merrill made me write "I am a very naughty food52er" fifty-two times on our whiteboard, and now all is forgiven.

So, today, inspired by a huge bunch of flowering chives and fresh eggs that I'd bought at the Greenmarket (and marginally less inspired by the sprouting potatoes on my countertop), I set out to make tortilla, the Spanish egg-and-potato cake, with a chive and garlic aioli. My twins at my side, eager to make a mess, I got to work.

If you've never made tortilla, it's similar to a frittata but with more structure. I like to slice the potatoes super-thin on a mandoline because I like the layers of potato to appear like puff pastry, a fine strata. Before mixing them with the egg, we spread the slices of potato -- slicked with oil and seasoned with salt -- on a baking sheet and roasted them until the ones at the center were tender and those on the perimeter a little crisp. Once they cooled, we mixed them with just enough beaten eggs to coat them like a sauce -- and you want to get in there and mix them with your hands so you can separate the potato slices. If you're doing this with 3-year-olds, watch with mild alarm as they lick their fingers.

I cooked the tortilla in a well-seasoned, round-sided cast iron skillet to create the famous rounded button shape known to tortilla. You can use whatever kind of pan you want, but if you'd like to avoid screaming when your tortilla sticks to the base of the pan, then use either well-seasoned cast iron or nonstick.

Then it's all about low and slow -- let the tortilla crisp slowly like you would duck skin. And turn it a few times (do this over the sink so any hot oil drips into the sink and not onto your toes or into the crevices of your stove).

And don't forget the aioli, which is a bit of a cheat. We made a chive and garlic oil by puréeing the heck out of the chives, a few garlic cloves and just enough oil to bind them. It should be pulpy and a little coarse. Then my kids whisked this into Hellmann's mayonnaise until they declared it adequately "spicy." You can make your own mayonnaise if you want, and we will applaud you.

Tortilla with Chive and Garlic Aioli

1. Heat the oven to 375 degrees. Peel the potatoes, then rinse them. Slice them as thinly as possible (1/16 inch thick) on a mandoline, and discard the nubby ends. Spread the potato slices on a baking sheet, sprinkle with 2 tablespoons olive oil, season with salt and toss to coat -- do this with your hands, which is the only way to coat them evenly; plus it's good for your skin.

2. Roast the potatoes for 15 minutes. Turn the potatoes with a spatula and roast for another 10. The potatoes are done when they're tender and the ones on the perimeter are getting brown and crisp. Remove from the oven and let cool.

3. Crack the eggs into a large bowl and whisk until blended and frothy. Add the cooled potatoes and a good bunch of pepper (I like it coarse). Blend with your hands, taking care to separate the potato slices without breaking them.

4. Generously coat the base of a well-seasoned 9-inch cast iron (or nonstick) skillet with olive oil and set over medium heat. Crush two of the garlic cloves and add to the pan. When they begin sizzling, slide in the egg and potato mixture. Arrange and press the potatoes so they're mostly lying flat. Reduce the heat to low (or medium-low if you have a meek stove) and let cook for 20 minutes. Check from time to time, slipping a spatula under one edge and lifting, to see if the tortilla is cooking too slowly or too quickly. By the end of 20 minutes, the base should be golden brown.

5. Now get ready to turn it -- this is the only tricky part about making tortilla. Get a baking sheet without a raised edge (or thin cutting board) and lay it, inverted, over the skillet. Then using oven mitts on both hands, lift the skillet, holding the pan on top and take it over to your sink, then swiftly invert the two, so the tortilla falls onto the baking sheet. Set down on the counter. Breathe.

7. Now don't hate me, but I'm going to have you flip the tortilla again and cook it for 10 more minutes on the first side. Then you can shut off the heat and call it done. Serve it at room temperature, inverted onto a platter.

8. Time to make the aioli: combine the chives and remaining 3 cloves garlic in a food processor or blender. With the machine running, slowly drizzle in the oil through the feed tube and let it purée until the chives are fully pulverized. You may need to scrape down the sides of the bowl once or twice. Season with salt.

9. Put the mayonnaise in a bowl. Add the chive-and-garlic oil, 1 tablespoon at a time (to taste), and blend with the mayonnaise. Adjust seasoning as desired. Serve alongside the tortilla, which should be cut into wedges.

AntoniaJames May 10, 2010
Such a funny coincidence . . . . garlic scapes made their first appearance at our market yesterday morning, so of course I picked some up . . . . and made a tortilla!! Like Mrs Larkin, I use boiled potatoes, because I like to drench them thoroughly while hot with sherry vinegar before putting them into the tortilla, with a couple slices of bacon that have been chopped. I logged on late last night to post that recipe, just a minute or two after this was posted!! Really like the idea of baking the thin slices of potato, to get that great flavor, as well as the chewy texture. Mmmmm, yum. ;o)

Amanda H. May 11, 2010
Our brains have been fused! Never heard of the vinegar and bacon detail, it reminds me of German potato salad, which I love.

AntoniaJames May 11, 2010
Yes, the idea actually was a spin-off of a quick lunch -- a fridge forage special -- several months ago, in which I used German potato salad leftovers in an omelet. Sounds crazy but it was quite tasty, if rather unconventional. I threw in some chopped and drained pickled fennel for good measure. Highly recommended.

WinnieAb May 10, 2010
Can't imagine how you do it all Amanda...congrats on the final edit of the Times book and happy Mother's Day! This looks really tasty...

RondaRowe May 10, 2010
What a good idea to bake the potatoes rather than the more traditional frying. I love Spanish tortillas, but I hate the mess I make frying the potatoes. This method keeps the flavors without the sacrifice of your stove-top.

Amanda H. May 11, 2010
I didn't know frying them was traditional -- that's what I was going to do at first, but decided I didn't feel like standing over the stove turning them, and I'd done the baking method once before. Sounds like from some of the other comments that you could boil, too.

Annelle May 10, 2010
This recipe comes at a very good time for me! I'm feeding vegetarians for a week beginning Wednesday, and I think this sounds delicious!

mrslarkin May 10, 2010
Amanda, you've been a busy bee the past several days. So you're forgiven. This sounds delicious. I love tortillas. I use boiled Yukon golds in mine, and made it several (read: way-too-many) times when my oven was broken.

MrsWheelbarrow May 10, 2010
Let's not forget the NYTimes cookbook and the (fantastic) asparagus recipe in the Sunday magazine. I had to marvel that you were still eating and tasting asparagus. Happy Mom's Day to you, Amanda. Thanks for this easy recipe that's sure to get a test in this house. Chives are flowering in the garden.

MrsWheelbarrow May 10, 2010
I'm crazy for chives and add them to everything. Just this weekend - cheesy grits, potato salad or celeriac remoulade. Last year, I took a scallion pancake recipe and replaced the scallions with chives, then served appetizer tiny pancakes w/smoked trout & a chive flower. The flowers are so sharp and tingly. I tried deep frying them last summer, but that was a bit of a disaster. Oily flowers.

drbabs May 10, 2010
Hi Amanda...I missed your column on Friday, but I figured that between looking at 70+ pizza recipes, mediating discussions about Caesar salad, and weighing in over at Slate, you probably had your hands full. Hope you had a happy Mother's Day.