Today: Why eat something just cold when it could be frozen? 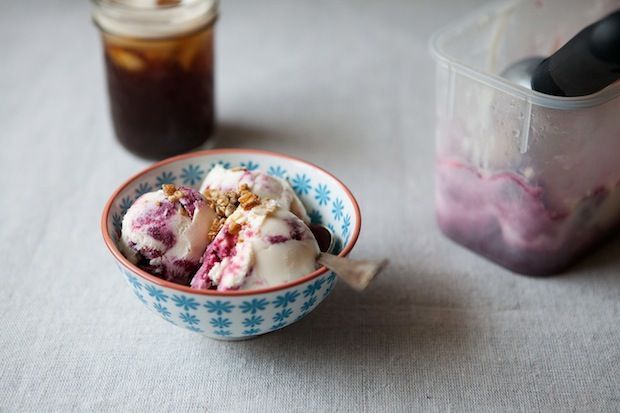 Every summer I reach a point where I am disgusted and bewildered by the fact that I own such things as sweaters, or an oven. I can’t remember why I ever acquired them. I would burn them, except that would just make things hotter, and all I want is to cool off.

Having moved this year and now living in Northern Minnesota, it has actually taken until this point in the summer for it to get that hot.  And it will probably only last a couple days. And I will rub it in, at least a little, because it basically took until May for the snow to melt and June for us to get out of the 40s. But the point is, it is now hot, and I come from a people who do not tolerate heat well.  When I’m hot, I tend to be grumpy, and I only want to eat ice cubes.

And this is why I decided it would be a great idea to take my morning yogurt with honey and fruit and freeze it. Why eat something just cold when it could be frozen? Lightly sweet, nicely tangy, and swirled through with tons of fruit, a good homemade frozen yogurt seems to me to be perfectly suited for playing the role of part of this balanced breakfast when the days of summer are most dogged. Yes, I snuck some heavy cream in there to keep the yogurt from freezing into an irrevocably solid block, making this a little more decadent than your average bowl of yogurt. But, it’s too hot to put cream in your coffee, so let’s call it even. 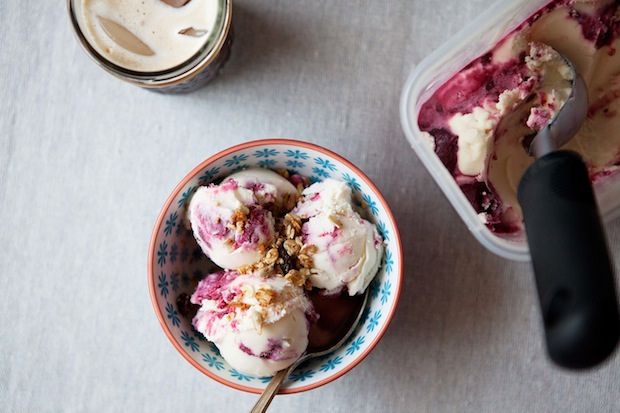 Makes about a pint and a half

Yelena July 28, 2013
I have a sweet tooth, but this was much too sweet for me. I would recommend halving the amount of honey used or nixing it altogether.
Author Comment

fiveandspice July 28, 2013
Sorry you found it too sweet! It is about the sweetness of ice cream (when I crave ice cream for breakfast, I guess I go ahead and make ice cream for breakfast!). The tricky thing with ice cream and frozen yogurt is you can't necessarily just reduce the amount of sweetener to taste because the sweetening agent is an important part of what keeps it from freezing too solid. That's the main reason I used 1/3 cup honey. You could probably get away with reducing it to 1/4 cup, but any lower and I would guess your frozen yogurt would freeze too solid to scoop - which is ok if you have 15-30 minutes to set it out and soften it, but I really wanted mine to stay scoopable when frozen. One option for reducing the sweetness would be to fold the yogurt with unsweetened fruit, rather than the fruit sauce. The chunks of fruit would freeze more solid than the fruit swirl (again because it's the sweetener that keeps it from freezing too hard), but I think this would be less difficult to eat than super hard frozen yogurt.

Cookingly Y. July 27, 2013
put it in the freeze for 1 hour. when it 'sets' mix with a fork. again in the freezer. repeat procedure after one hour

Julie W. July 25, 2013
What a perfect breakfast for my kids during the crazy hot Texas Summer.
Author Comment

fiveandspice July 26, 2013
It definitely starts a hot day off right.

gingerroot July 25, 2013
What a fabulous, smart idea! My children thank you.
Author Comment

fiveandspice July 26, 2013
I hope they enjoy it! It's definitely very child friendly , for adventurous and non-adventurous kids alike.

fiveandspice July 26, 2013
I think there would be absolutely nothing wrong with that.

fiveandspice July 26, 2013
Why thank you! I was pretty pleased with myself.