Today: A glimpse back at lobster's humble roots. 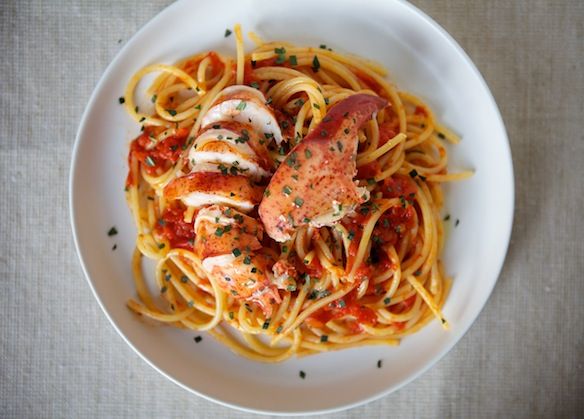 Lobster is a food that's by and large reserved for special occasions: celebratory dinners and summertime coastal vacations. It's a rare enough treat that you're willing to tie on bibs as adults and get your fingers soaked with butter in polite company.

But these esteemed crustaceans started at the bottom.

Hundreds of years ago, lobsters were so plentiful in North American waters that they washed up on the shoreline in two-feet-high piles. Native Americans primarily utilized the shellfish to fertilize their crops and as bait to catch other, more valuable fish. Then, during the colonial period, lobsters were so cheap and abundant that they were fed to prisoners, slaves, and apprentices. Servants grew so sick of the meal that they protested and demanded that they only be fed lobster three times per week, at most.

In the mid-1820s, there was an increased demand for lobster from the higher classes in -- where else? -- New York and Boston, paving the way for lobster to become the delicacy it is today.

Aside from a brief period during World War II -- when it remained unrationed, providing a cheap protein-rich option that America craved -- lobster continued to crawl its way up the desired-food chain.

Winifred R. August 9, 2013
Also of interest is the changing status of oysters. In the early days of the colonies, oysters were among the foods first eaten by the explorers when provided by the native peoples, but they were unwilling to take them as "starvation foods" for themselves. Oysters grew well in the James River adjoining Jamestown Virginia yet there was little use of them during the starving time from what I can tell in the historical and archaeological records. With the advent of trains and ice to pack oysters, these same shellfish from the same area (the descendents of the oysters available to the colonists) were sent across the US and across the world approximately a century later as Lynnhaven oysters. Since the 1950s disease combined with fishing pressures have seen a heavy decline in the oyster population, but some still remain. Fishery scientists and watermen are working on improving the fishery again, but dermo and MSX (oyster diseases) are still problematic.

Archimagirus August 9, 2013
The lobster and salmon story is one of the most frequently told about New England seafood. It generally goes like this: Salmon and lobster "used to be so abundant that, it is said, " pick one---the apprentices, servants, boarders, lumbermen, occupants, prisoners, and slaves of-pick another--Newcastle, England, Boston or Lowell, Massachusetts, Puget Sound, Bristol, Rhode Island, Islesboro, Maine, the Maine State Prison, or the South-refused to eat either lobsters or salmon, more than twice a week. Recent versions of the story usually feature lobster, but the vast majority of accounts prefer salmon.

All the stories have in common some group of people who have no control over their food choices, people who have to eat what is served them. The stories all explain that these sufferers had a meeting to form a complaint presented to an official in charge. The story, substantiated only by reference to an alleged expert who "has it on good authority" or words to that effect, is usually put in the context of former natural abundance. So the tale is reported second hand, refers to a time from fifty to one hundred years earlier than the usual late 1800s publishing date. The most common sources for this particular tale are town histories which abounded in the nineteenth century often written by a local antiquarian, though it appears also in George Brown Goode's The Fisheries and Fishery Industries of the United States published in 1887. Lack of primary evidence is the main reason to doubt this story. No minutes of these indignation meetings, nor ordinances outlawing sea food more than twice a week, have ever emerged. But why salmon, why lobster, why twice a week?

The stories appear when salmon or lobster are becoming historically scarce, when the author wants to recall a distant, more abundant past. Twice a week was for many in early England or the colonies, the number of fast days a week on which one customarily ate fish. As Protestantism neglected religious fasts marked by fish consumption, the idea of having to eat fish more than one's religion formerly required sounded like an imposition on people who always preferred meat to fish.
The Truth About Spices, Lobsters, and Flaming Ladies

emery August 10, 2013
Having worked on several Dutch stone houses in the hudson valley --I can say they ate plenty of oysters -- one garbage pile was about 8 to 10 ft high --mostly oyster shells and clay pipe stems

Katie P. August 31, 2013
Thanks for that. I've heard the "lobster protest" story countless times, but never with an actual historical source. I would not be surprised if it were completely made up.