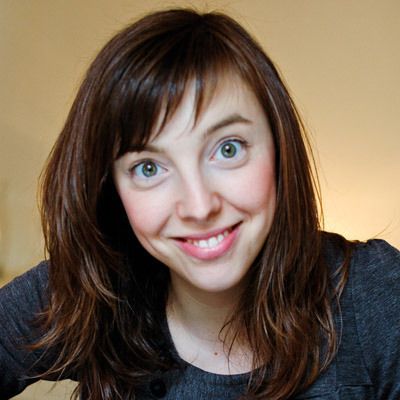 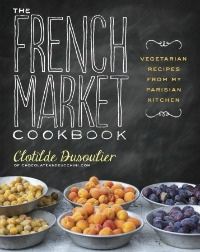 Until Clotilde Dusoulier came along, we never thought of French food as very vegetarian-friendly. But with her much-loved blog, Chocolate and Zucchini, she has shared inventive, accessible meatless recipes from her French kitchen.

In The French Market Cookbook, Clotilde has compiled a variety of vegetarian recipes that celebrate France's abundance of fresh fruits and vegetables. Luckily, though, you don't need a plane ticket to buy them -- just a trip to the farmers market, and perhaps a free copy of the book. Read on to learn more about Clotilde's process, and how she has adapted her cooking style now that there's a toddler in her kitchen.

How has Chocolate and Zucchini evolved since you began writing in 2003?
I feel it has matured at the same rate as I have over the past decade -- I was 24 when I created it, and I'm 34 now. My approach to writing and cooking is more minimalist now, but the spirit remains the same: to convey my enthusiasm for the foods and artisans and places I talk about, and to inspire my readers to cook simple, colorful, seasonal dishes for themselves and the people they love.

What lessons did you learn from writing your first cookbook that you were able to apply to The French Market Cookbook?
The main lesson was to not shoot the pictures myself the second time around. Although I enjoy taking photographs of my dishes, and found it very enjoyable conceptually to do everything from start to finish, being a one-woman-band was also a considerable amount of work, and was overwhelming at times.

So when I started work on The French Market Cookbook, I hired a food stylist and two photographers (one for the recipe photos, one for the Paris and market scenes) whose work I admire. I was very involved in the entire process though, because I'm pretty detail-oriented and it was super important to me that the photos reflect my vision for the dishes -- I wrote a post about that on Chocolate & Zucchini.

Are there any classic French dishes that haven't made vegetarian yet -- but you want to?
I love the idea of vegetarianizing classic stews, and this fall I plan to give that treatment to Flemish carbonades, a beef Bourguignon-like stew from the North of France that's richly flavored with beer and spices. I think it will work really well with big chunks of mushrooms, potatoes, and other root vegetables.

What's the recipe from your new book that you've made the most?
The French Market Cookbook is the result of my cooking more and more produce-oriented dishes for the past five years or so, so all the dishes have gotten a lot of mileage. But perhaps the ones I've made most often are the Swiss Chard Pie with Prunes and Pine Nuts, the Green Pancakes, the Ratatouille Tian, and the Shaved Fennel Salad with Preserved Lemon. For dessert, I've made a lot of the Pear and Chestnut Cake and the Chocolate Berawecka.

You've begun a "parents who cook" interview series on Chocolate & Zucchini. Let's turn the tables: Has having a child changed the way you cook?
It definitely has, mostly because I have less time to cook, and fewer opportunities to do so for a long time without being interrupted.

The first change is in the organization: mise en place is now my middle name. I prepare recipes in separate installments during the day or even over a couple of days, washing, trimming, cutting, and measuring what I can without loss of flavor or freshness. It simplifies baking a great deal, too: I weigh everything in containers the day before, and only need to mix the batter on the day of. I've also gotten quite adept at doing some (safe) tasks with just one hand, carrying my son (now 15 months) on the other hip so he can watch what I'm doing.

The second big difference is that now that he is eating solids, I am looking to cook dishes that will work for him and for us with only minor adaptations, if any. It's not that hard: it's mostly a matter of texture (it's safest if the food isn't too hard or crunchy) and seasoning (we add salt and chili sauce in our own plates). Overall, he can pretty much eat the same things we do, and it's so much fun to see what he will or won't eat -- he's not a fan of plums or tomatoes for now, but last week he tried bokkeum myeolchi, a Korean dish of small dried fish in a sweet sticky sauce, and appeared to enjoy it very much.

We're giving away three copies of The French Market Cookbook! To enter, tell us in the comments: what recipe would you like to vegetarianize? We'll choose winners at random this Friday, August 30th at 3 PM EST.

Tmefford February 23, 2018
Girlfriend got this book at a local bookstore. Insisted try some of the recipes.
Nice pictures; book well designed.
Cant help but think the author of the book has never cooked any of the recipes. The asparagus tart and the cauliflower gratin were nearly tasteless and required way more work than the results justified. (I'm not a chef, but do quite a lot of home cooking, including French).
An interesting exercise but would not recommend.

Hunter August 8, 2017
I'd like to see Beef bourguignon! It would be interesting to see this vegetarian :)

Charles N. March 4, 2017
If you enjoy good food and you enjoy cooking then you may be interested in the fact that it is now possible to buy French food online at very affordable prices.

Kristy M. September 9, 2013
A tasty veg pate, a "BLT" w/o bacon but something crunchy, salty & smoky instead? Really good sausage made w/o meat.

cookinginvictoria August 30, 2013
I don't really look to vegetarianize meat dishes either, but this is a fun exercise. I think I'd pick French country pate and duck confit!

Clotilde's cookbook sounds wonderful. I look forward to browing through it.

creamcheese August 29, 2013
I usually hate meat recipes turned veg since there are so many good veg recipes to begin with :). Maybe a way to get a croque madame to have the same salty rich flavor as the regular?

Hannah August 29, 2013
I eat so little meat that I can't think of something that I just *wish* were vegetarian. That being said, I always love posts about flavorful, balanced vegetarian meals.

LeChococat August 28, 2013
Clothilde's cookbook sounds fantastic! I'd love a vegetarian version of cassoulet. (And I'd love a copy of her cookbook!)

jamcook August 28, 2013
Well, I love vegetable tarts and crepes; so maybe more varieties of those please.

blackberry August 28, 2013
Definitely Carbonade Flamande, as Clotilde mentioned - one of my favourites, so looking forward to that addition! Maybe Tartiflette?

Annemette T. August 28, 2013
Bacon;-) I love vegetables, and think I could easily be a vegetarian, but I am sure bacon would be the thing I would miss the most. Since it, strictly speaking, isn't a recipe, I think I need to repeat what others have said; stews and other fall/winter comfort food, which in my world usually is based on slow cooked meat