Fish Tacos on the Grill 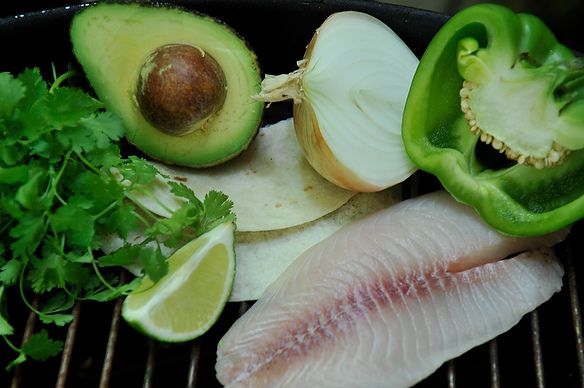 My friend Guillermo is originally from Mexico City and is a great cook. Over the years, I’ve learned a number of authentic Mexican dishes by watching over his shoulder – including pico de gallo, savory sopes and killer huevos rancheros. But there's one recipe in particular that Guillermo taught me early on which I return to regularly for its freshness and simplicity: fish tacos.

I remember the first time someone told me about fish tacos, rhapsodizing about how great they were -- all I could picture was a hard taco shell, stuffed with ground seafood that had been flavored with taco seasoning. Needless to say, I was in no hurry to try them.

Years later, I showed up at a barbecue to find Guillermo manning the grill and making fish tacos. Of course, the reality was much different than what I'd originally imagined: tender chunks of grilled white fish nestled in a soft, warm flour tortilla among strips of sweet onion and green pepper, creamy slices of avocado and tufts of fresh cilantro. There were lime wedges for spritzing, and plenty of homemade salsa.

These particular fish tacos were a wake-up call of sorts for me, and now I seek them out wherever I go. I like versions where the fish is encrusted in cornmeal and then fried, and I like those that include some sort of zippy homemade slaw. But when I make them at home, I always return to the simplicity of Guillermo’s tacos. These take all of 20 minutes to throw together, and if you don’t have a grill, by all means use a pan.

1. Heat 2 tablespoons of the olive oil in a large, heavy skillet over medium-high heat. Add the onion, pepper and a generous pinch of salt, stirring to coat the vegetables in the oil. As soon as the onions start to brown a little around the edges, turn down the heat to medium low and cook, stirring occasionally, until the onions and peppers are tender but still have a bit of a bite, about 5 more minutes. Taste and add more salt if necessary, as well as a few grinds of pepper. Set aside.

2. Heat a grill so that it is quite hot, but not blazing. While it’s heating, peel and cut the avocados into thin slices and arrange them with the cilantro and lime wedges on a plate. Rub the fish all over with the remaining 2 tablespoons of olive oil and season generously with salt and pepper. When the grill is hot, gently lay the fish on it and cook, without fiddling with it, for 2 to 4 minutes per side, depending on how thick the fillets are. You want it cooked through, but not at all dry. Gently remove the fish to a plate and keep warm. (If you’re not grilling, just cook the fish in a non-stick pan over medium-high heat the same way.)

3. Wrap the tortillas in a stack in aluminum foil and seal. Put the foil packet of tortillas on the grill and cover for a few minutes, until they are warm. Alternatively, you can heat the tortillas a couple at a time right on the grill, using tongs to flip them after about 10 seconds.

4. To assemble a taco, break the fish into large chunks with a fork. Take a warm tortilla and put several pieces of fish in a line down the center. Top with a forkful of the onions and peppers, a few slices of avocado and a pinch of cilantro leaves. Add a generous spritz of lime juice and some salsa if you like. Roll and eat. Leave it up to your guests to make their own, and remind them that if they get messy in the process, they’re doing it right!

EmilyNunn June 18, 2010
Making these for the second time, maybe adding some limey cabbage on the side.

Sarah's K. June 6, 2010
Fish tacos must be all the rage right now. There was a great segment on the Today Show last week where fish tacos were made in frozen wanton shells that had been baked in the oven in muffin tins for 5 mins at 375.

Sarah's K. June 6, 2010
Fish tacos must be all the rage right now. There was a great segment on the Today Show last week where fish tacos were made in frozen wanton shells that had been baked in the oven in muffin tins for 5 mins at 375.

patricellen June 6, 2010
We totally love fish tacos and have been making them for years. There are probably as many fish taco recipes as there are cooks who love to make them. But never have I come across a recipe that uses flour tortillas. The traditional fish tacos from the coastal regions of Mexico are always served in a fresh corn tortilla. If you haven't tried this, you really must. It's a totally different and wonderful experience. Homemade tortillas are the absolute best!

Nantucket C. June 6, 2010
Was wondering what to serve for dinner this evening! It's a perfect night for grilling on Nantucket, so this is on the menu!

jimmyray June 6, 2010
How about Guillermo's "killer huevos rancheros" that you mentioned - that would also be a great recipe to have!

J-Dizzle June 2, 2010
Yummmmmm, I have some fresh Manitoba Pickeral....will be making the Fish Tacos this evening....they sound mmmmmmmmmmmm!

Kelsey B. June 1, 2010
I love fish tacos. They seem to go perfectly with this ridiculously hot June weather, too!

EmilyNunn June 1, 2010
Brilliant! I'm going to buy ingredients today. I see these served frequently on our rooftop this summer.

Merrill S. June 2, 2010
I'm flattered! The recipe is really a jumping off point -- I'm sure you'll make some admirable additions/alterations.

Lizthechef June 1, 2010
It took me 25 years of living in San Diego before I would even taste a fish taco - am addicted now. Your recipe looks very good! I think I will try a red or orange bell pepper since I have an aversion to the green guys...

Merrill S. June 1, 2010
You make me feel much better about my past resistance!

smithbites June 1, 2010
Made Fish Tacos with a great piece of salmon yesterday - used a dry rub and then grilled on the Big Green Egg; topped with an Avocado slaw - and yes, I have leftovers for lunch today!

aargersi June 1, 2010
Yum - absolutely love fish tacos - I also sprinkle cumin and/or chili powder on the fish before cooking, and if you have any pickled onions laying around they are darn tasty in there too :-) Now I want these for lunch!!!