Today: A side of broccoli, as the Romans do it. 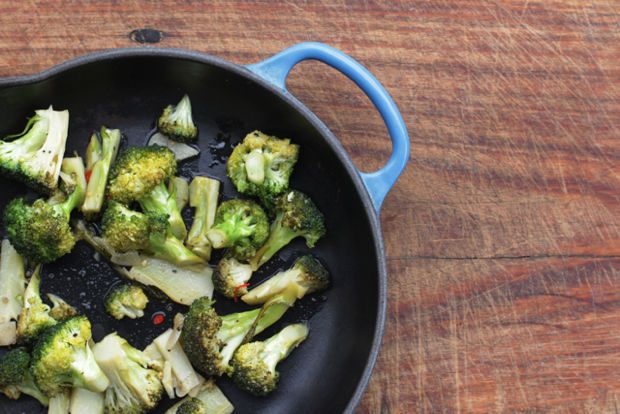 The Romans have a way of taking the simplest of ingredients -- just a few, you could count them on one hand -- and, in moments, whipping up extraordinarily tasty dishes. Think of one their most iconic dishes, spaghetti alla carbonara: guanciale, pecorino cheese, egg yolks, black pepper. Or the classic pasta dish cacio e pepe, the exquisite sauce of which is nothing but cheese, pepper and some of the cooking water from the pasta. This side dish is no exception.

The technique here is suggested by the name of the dish, strascinati (stra-shin-ah-tee), which means “dragged,” describing the motion of dragging the broccoli across the pan with your cooking implement as you sauté them. It's an interesting technique in Italian cuisine, fondly used in Florentine cooking too -- most notably for penne strascicate (stra-shi-ka-teh), where penne pasta is cooked until just before reaching al dente, then joins the sauce in the pan where it is “dragged” around, soaking up sauce until cooking is completed. Strascinati is also the name of a fresh pasta, cousin to orecchiette, from Puglia and Basilicata, where small pieces of dough are shaped by being dragged with a finger across the work surface. 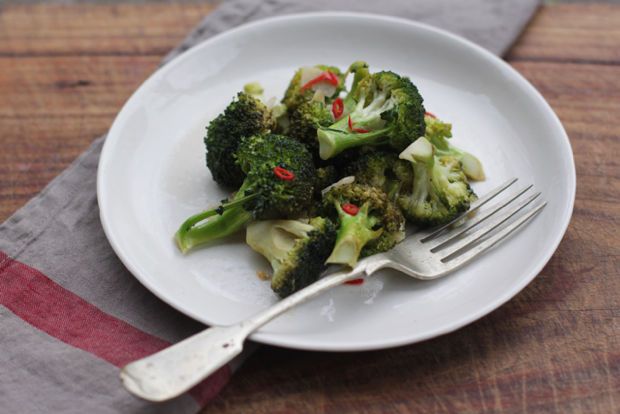 It distinguishes itself from the usual vegetable dish because of the fact that the vegetables aren't blanched before hitting the pan, something that allows the broccoli to retain a bit of crunch. In fact, in her 1921 cookbook, The Talisman, Ada Boni (a Roman herself) calls this dish “broccolo a crudo alla romana” (Roman style raw broccoli). The broccoli gains a bit of colour being browned first in olive oil, then plenty of garlic and chili are added and finally some liquid at the end completes the cooking. It's all over in a matter or minutes.

Like many regional dishes, this is usually one of those that isn't followed according to a recipe but that families make to their taste. Some will infuse whole garlic cloves in the olive oil, then remove them before adding the broccoli -- a mellow version for those who are garlic-shy. Some may use red wine or water instead of white wine and add it before adding the garlic and chili. Traditionally, this is always done with broccoli, but this technique lends itself well to other vegetables in the brassica family like cauliflower and romanesco broccoli. But why stop there? It's wonderful also with leafy greens such as kale and silverbeet.

pierino October 1, 2013
When you say Rome, you are speaking my language---SPQR. Most times vegetables in Rome just get hammered to death. Ciccoria being a bit of an exception. The word broccoli in Italian covers a vast array of green stuff. I have a head of "broccolini" in my fridge at the moment, with those mint green, spikey florets. Thanks for the inspiration.
Author Comment

Emiko October 1, 2013
Prego! And that's why I love that Ada Boni calls it broccolo a crudo to distinguish it from the regularly well-cooked (over cooked) vegetables!

carswell October 1, 2013
I use the oil, garlic and chili flakes combination regularly with rapine. I'm not sure I'd enjoy it as much with broccoli.

Emiko October 1, 2013
Rapini (or broccoli rabe), with that great bitter flavour, is perfect done this way, as does really anything in the brassica family, though regular broccoli is the classic. ;)

pierino October 1, 2013
I'm always surprised that the mainstream American (English) palate does not get down with the "bitter" component. Personally I love it in the same way that the Italians embrace it. Even radicchio! I worked some cooking jobs where I sent out salads with radicchio chiogia and some plates came back with the chiogia barely touched. What with these people?
Author Comment

Emiko October 2, 2013
Radicchio is possibly one of my favourite things ever ;) I read a very interesting article recently on how vegetables with bitter flavours are more nutritious but over the centuries, they've been bred out in favour of sweetness: http://www.nytimes.com/2013/05/26/opinion/sunday/breeding-the-nutrition-out-of-our-food.html