Today: Why you should feed chicken liver pâté to your children. And to yourself. 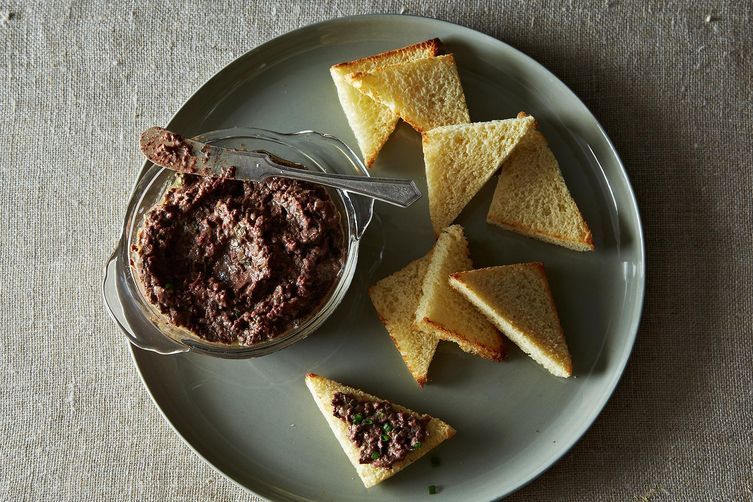 It should be clear by now, if you have been following this column all along, that it is a deeply flawed, wholly unhelpful enterprise, in which I recommend recipes that your child will never agree to eat and which you end up consuming alone, late at night, paired with a nice malt liquor. (This is the premise of the column, actually.) But in case you still harbored some quixotic hope that I’d throw you a healthy, time-saving, child palate-appropriate dinner, I should warn you that the rest of this column is about offal. Also, pâté.

On the plus side, your late night dinner will be lovely. 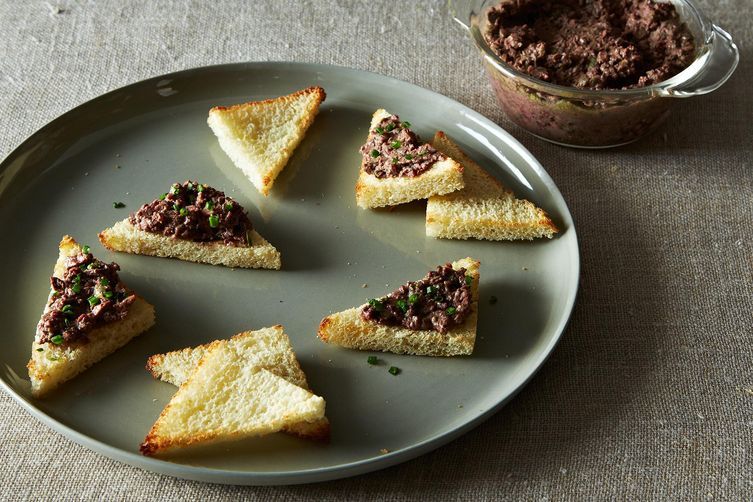 As a child, I ate enormous quantities of pâté. It came in shrink-wrapped mini-footballs manufactured by Oscar Mayer in a massive factory down the street in Madison, and it was called liverwurst, or Braunschweiger, but still: pâté. It used to come standard with a Midwestern childhood. It may still.

More: Another thing kids don't know they like? Anchovy.

Children are the ideal consumers of innards. Grown-ups dislike offal mostly because we know what it is. (And sometimes because the taste is too weird but only sometimes -- heart isn’t a weird taste. It’s a weird thought.) Children, on the other hand, barely know what anything is. They eat in a state of glorious ignorance. They don’t even know they’re eating animals to begin with. Even if they’re explicitly told that (and I’ve tried). “I don’t eat cows, Dad,” a friend’s preschool son once corrected him. “I eat meat.” This might be how Jonathan Safran Foer famously made it to nine without realizing that chicken was chicken. And if it took Foer that long to connect the dots on chicken, it’ll take my children until at least eleven to realize that liver is liver.

And then they will become vegans, obviously. But until then, when I drag a whole buffalo home from the farmers market, I will feed them every part of it. 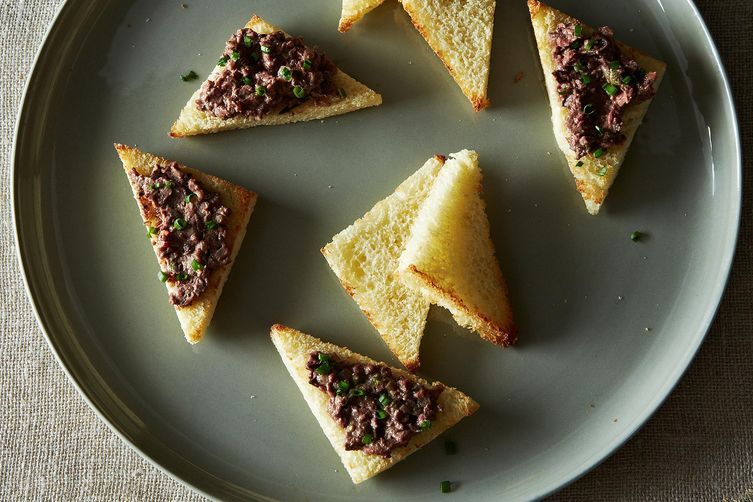 Until now, though, I have been in flight from my own childhood. My children haven’t eaten much pureed pork liver. Is this because in our new ingredient-paranoid age of parenting buying industrially shrink-wrapped packages of offal seems like a bad idea? Of course it is. These days you can’t write a column about children without inadvertently writing a parody of a column about children. Is the next part of this column the equivalent of how I reject the suspect Tupperware of my childhood and teach my children to craft small-scale, artisanal, acronym-free plastic containers using the bones of that buffalo?

I made my liverwurst amends with chicken livers, not pork. Chicken liver pâté is pâté for amateurs, but my versions always have been muddy and tiresome -- the sort of pâté you trudge through on your way back to the cash bar. No longer. This pâté -- call it a spread -- from Odd Bits, Jennifer McLagan’s book on the rest of the animal, is the opposite: bright with capers and vinegar, it skips back to the bar. (It’s a cousin to this splendid Tuscan chicken liver pâté.) It keeps well but it is ethereal still warm -- light and lively but still sumptuous. Call it whipped offal. (You’re welcome to the brand name.) The toddler ate half of it before it even got to the fridge. By that night there was nothing left to pair with the malt liquor.

Catherine February 13, 2014
I use an ancient Elle Cookbook recipe that calls for a ton of butter and very little else but chicken livers lightly poached in white wine, s&p, quatre' epices and a blender. OMG it is the closest approximation to real fois gras pate' I have ever eaten. it make a ton so it's great for parties or I pipe out little rosettes of it on wax paper and chill until set then store and place on toast points to thaw. But this one seems much healthier (no butter) and just as yummy.

bookjunky January 7, 2014
My mom used to tell me that when I was a little girl, I saw some baby chicks in the grocery store (obviously this was eons ago). So there she was showing me these adorable fluffy chicks, and me happily exclaiming, "MMMmmm! Chicken!" and rubbing my tummy in anticipation.

I still love chicken as well as chicken livers, and this pate sounds so good. If I were not married to a vegetarian, I would make it. My son, alas, is 11, and too old to eat real food. For now, anyway. I force a few vegetables down his unwilling throat every day, in the hope he will someday recover the palate he had as a toddler. I blame years of preschool snacks, public school cafeteria food, and "kids' menus".

Kukla October 11, 2013
I created a vegetarian Pate from quinoa, Green French lentils, Caramelized Vidalia onions and walnuts which taste very much like the very best Chopped Liver does: http://food52.com/recipes/23684

savorthis October 10, 2013
My dad made it all the time and called it gehachte which is a really satisfying word. His version (and thus mine: http://food52.com/recipes/16812-chicken-liver-pate) uses schmaltz and was chunkier like the one shown above and of course had some chopped egg. But I had read some recipes that blended the pâté until smooth and found that after all those years I preferred it that way. I like your addition of capers and rosemary though and will have to see what the four year old thinks of it.

Veggielover October 10, 2013
I used to eat and make chicken liver pâté a lot...but now I make a veggie substitute mostly. If I do make with real chicken livers, I only use organic. Good stuff!

savorthis October 10, 2013
do you make a mushroom pâté? we make this one often- it's amazing: http://www.foodandwine.com/recipes/porcini-and-pecan-pate

Veggielover October 12, 2013
Going to try that mushroom one! Looks delish!

Veggielover October 12, 2013
oops!...use some of the oil to caramelize the onions and some to coat the pan to broil and coat the eggplant! :)

ChefJune October 10, 2013
Of course I will be making this! I almost always have some sort of pate in the house for unexpected guests, or "just us." This one IS quite reminiscent of the Chopped Liver I never questioned growing up. :)

amysarah October 10, 2013
My mother made lots of terrines, pates and mousses, so it never really put me off. But more to the point - this type of chicken liver pate is a close cousin to classic Jewish chopped liver (made with onion, sauteed in chicken fat or butter, ground up with hard boiled egg and s&p) very commonly served as a nosh before every Seder, or holiday feast. Maybe my family was weird, but all the kids gobbled it up. We weren't keen on big pieces of liver, but chopped on a Tam Tam cracker at grandma's? Yes, please!

Brette W. October 16, 2013
I LOVE Tam Tams and my grandparents always stock them at their house! We ate chopped liver and gefilte fish on them too.

Claire F. October 10, 2013
Sadly, my parents waited until I was about 10 to introduce me to pâté, by which point I knew what it was and wanted no part of it. This didn't change until I started working in restaurants in my twenties — the idea of innards still bothered me, but I reasoned that if I was being encouraged to try expensive foods in a 4-star restaurant, I shouldn't pass up the opportunity. Never tried making it, but this looks good, and I have some unsuspecting toddler nephews I can test it on.

rlouisecull October 10, 2013
Having grown up a Midwestern child in a family with deep German roots, I did not realize that my beloved Braunschweiger was liverwurst until I was nearly 30... You may have more years than you realize.

[email protected] October 10, 2013
When we have pâté in the house, I have to hide it from the kids if I'm going to get any. We've been making the Jacques Pepin recipe, but were just the other day talking about finding a more everyday recipe, with a tad less butter. Can't wait to try this!