Today: Bethany Kehdy of Dirty Kitchen Secrets introduces us to a variation of the beloved Middle Eastern dish, kebbeh, cooked with nafas. 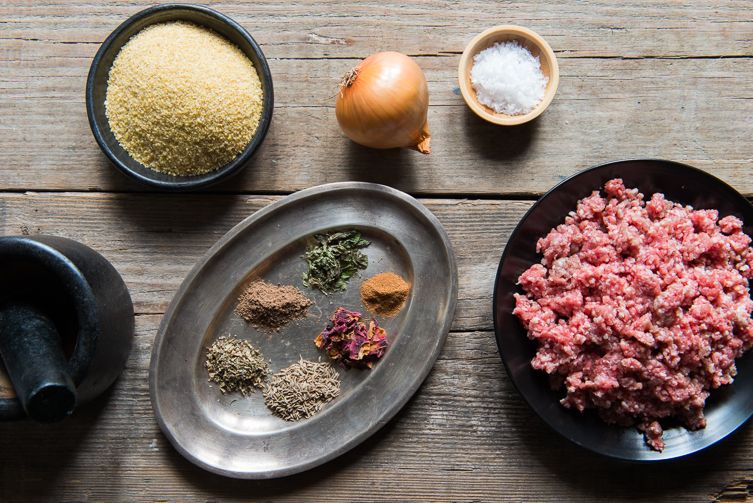 I was enchanted with "international" food in my teen years. I spoiled my siblings with creamy mushroom and chicken casserole, my boyfriend with spaghetti puttanesca, and the masses with risotto. I was particularly proud of my béchamel-sauce-making capabilities and doubly so as I’d managed to pick it up just by loitering around one of my aunts' kitchens. But, as much as I enjoyed messing around a stove, never did I consider cooking Middle Eastern food. 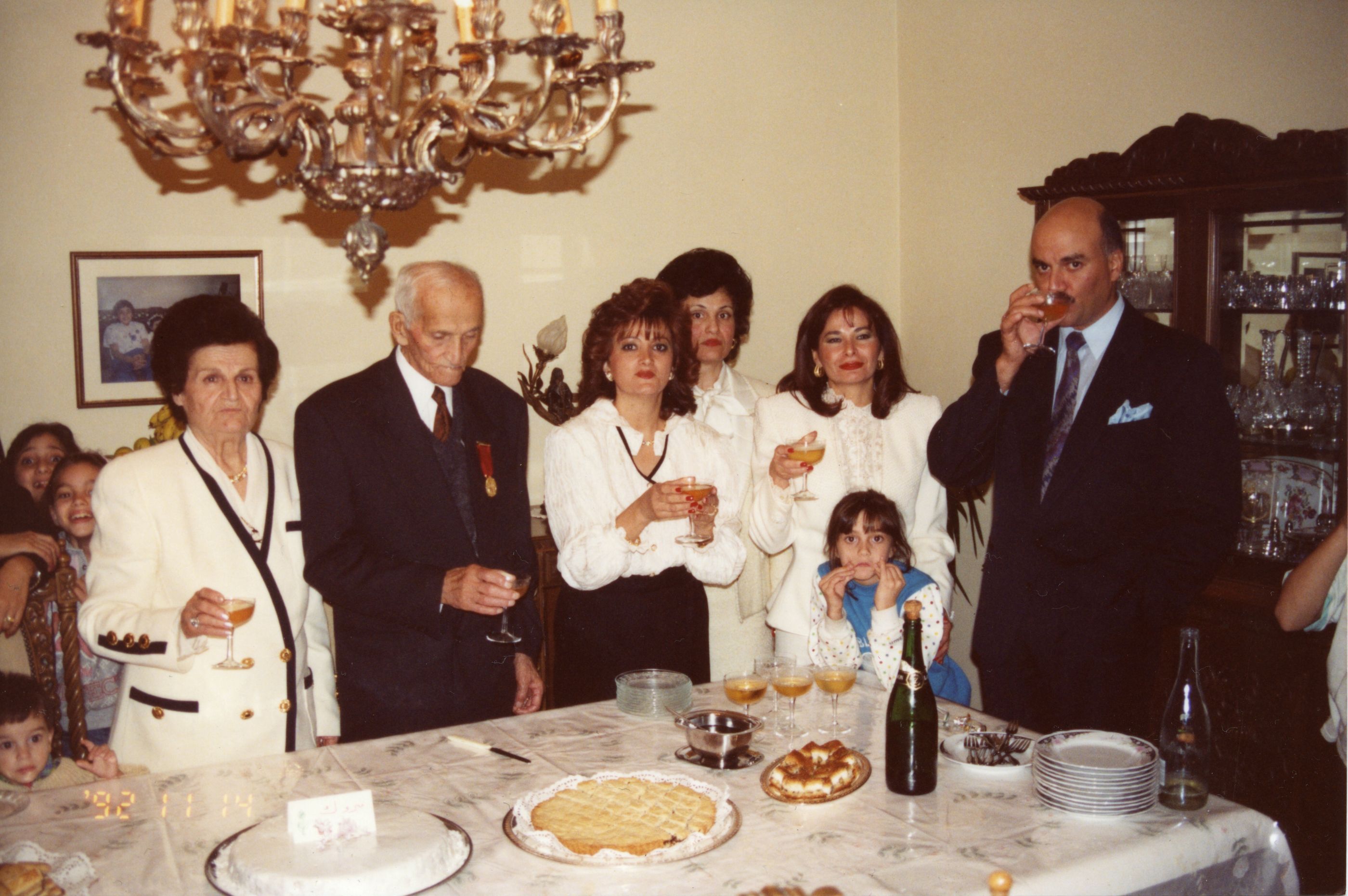 My family celebrating my grandfather being awarded The Order of the Cedar. From right to left: my father, my sister Joslin, my three aunts (Amale, Najwa, Janane), my grandfather and my grandmother.

By my early twenties, I still had yet to allow my hands the honor of completing a Middle Eastern dish. After all, I had grown used to the comforting Lebanese food that was prepared daily by my aunts, grandmother, and father. These were dishes executed to perfection by tireless hands that pounded, chopped, and stirred to keep age-old techniques and aromas alive.

When it came time to find work, I left Lebanon and wandered to far-off places such as Montreal and Houston. During my days in Montreal visiting with family, my cousin Melanie and I grew accustomed to a freezer with shelves piled high with homemade kebbeh pies that would see us through until my aunt Amale’s return from Dubai. 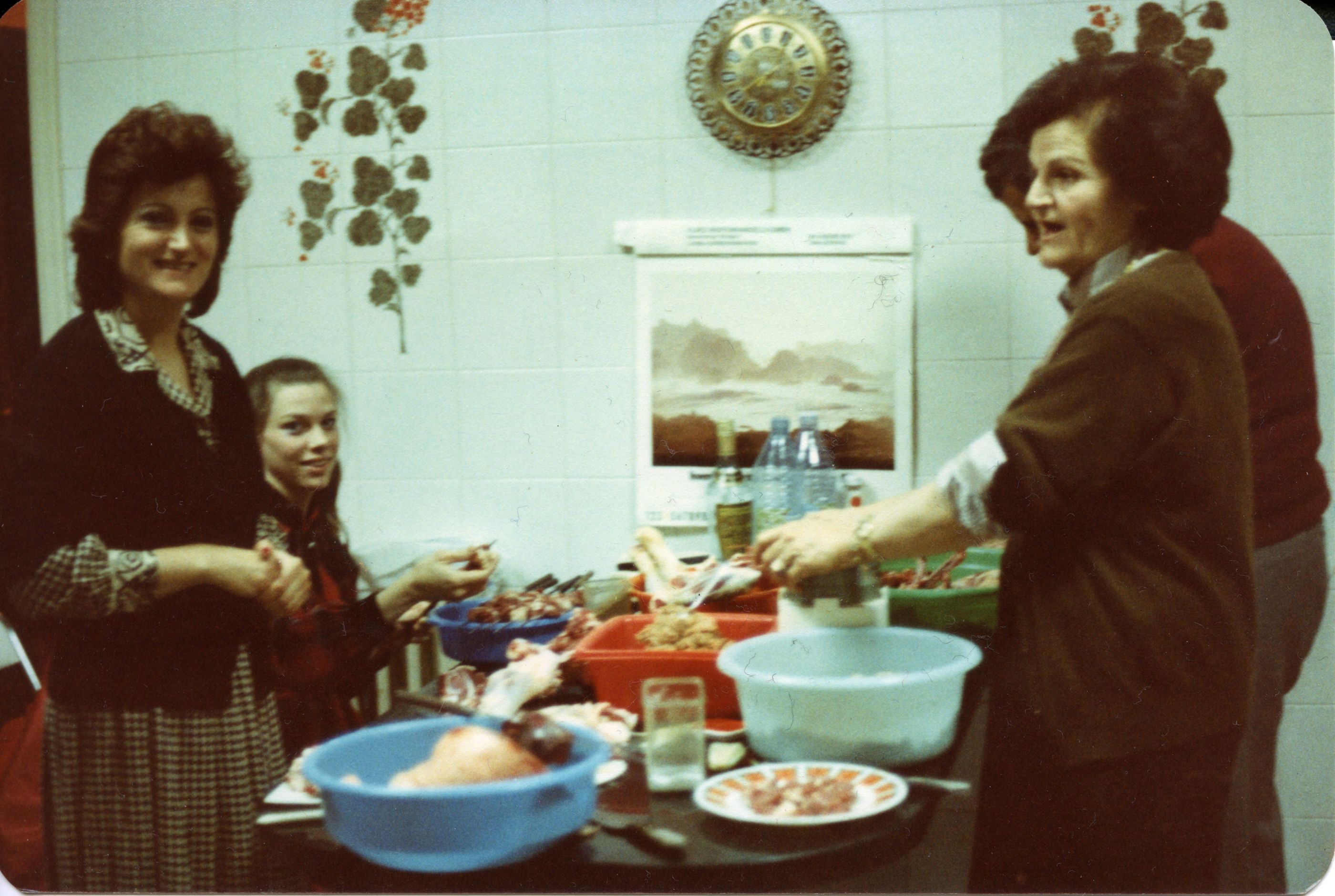 Grandma making kebbeh. My mother is skewering meat in the background and my aunt Janane is smiling.

Amouleh, as we endearingly call her, is an aunt to cherish for many reasons -- if you are only so lucky to taste her kebbeh, then you would no doubt concur with my previous statement without hesitation. With a crisp, flavorful crust and a filling loaded with caramelized onions, her kebbeh is nothing short of a labor of love, learned by watching and helping her mother Adla, whose knack for kebbeh and tabouleh preparation was revered. It wouldn't be long before I would become the next culinary heir in the line of female cooks in my family, and so the technique of kebbeh-making was passed on once more from one generation to the next. 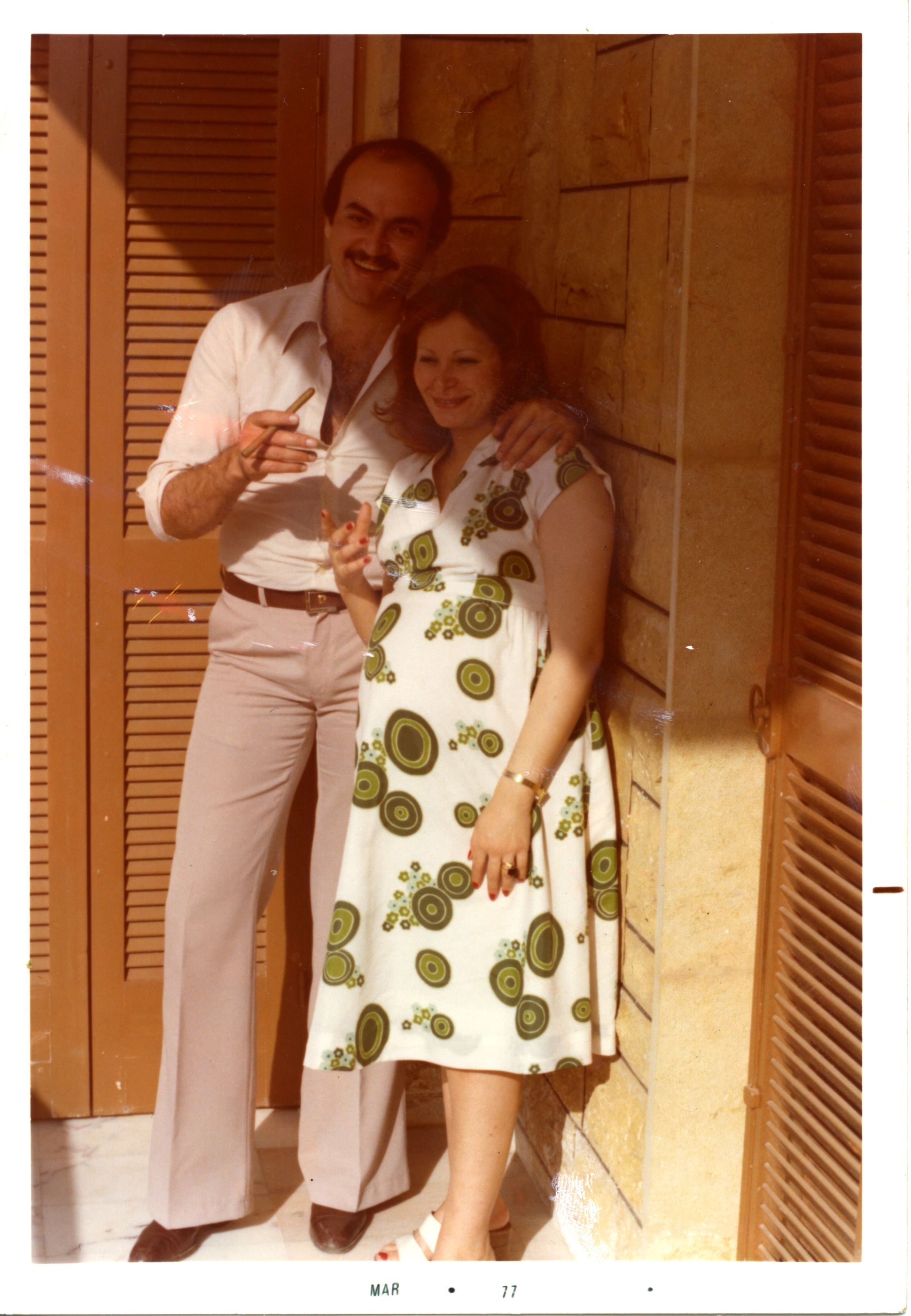 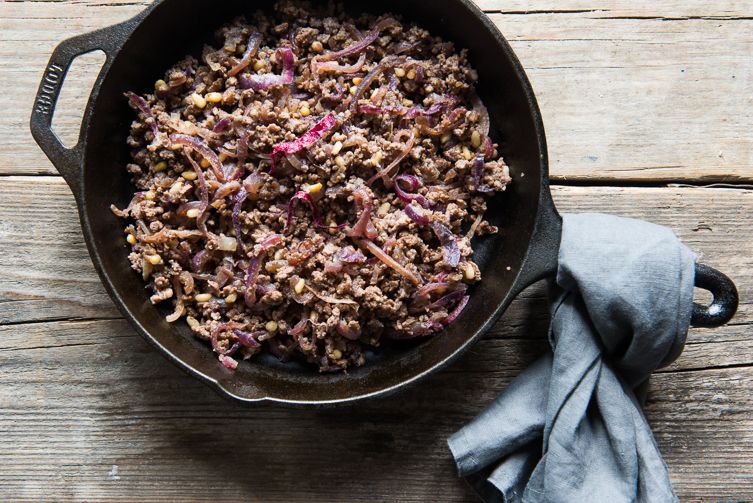 My dad and my Aunt Amouleh.

When the Montreal winter came through, I packed my bikini and headed for sunny Miami. When the freezer stuffed with edible gold was no longer within reach, my heart, soul, and belly began yearning for the very dishes I had come to realize I’d rebelliously taken for granted. I would have to take matters into my own hands to quiet the cravings. And so my endeavors for dinner quickly shifted from the now-meaningless spaghetti and risotto to my aunt Amale’s (and grandmother's) kebbeh, tabouleh, and other such Lebanese classics. 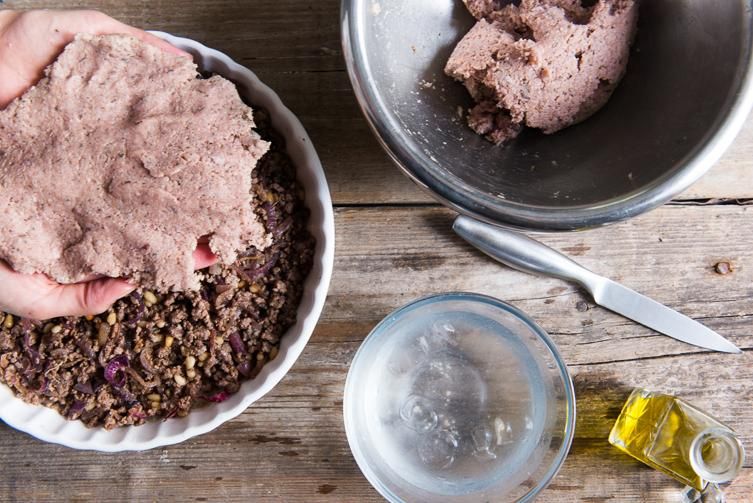 In the days before Facebook and with Skype just on the cusp of its first year, a good old telephone call was my best bet for reaching my culinary past. I secured a cordless phone between one ear and shoulder, dialed out my aunt's phone number and, after a brief greeting, I uttered: "Tell me how to make kebbeh, Amouleh?” This, along with hummus and mtabka, were the first things I wanted -- no, I needed -- to learn to make. 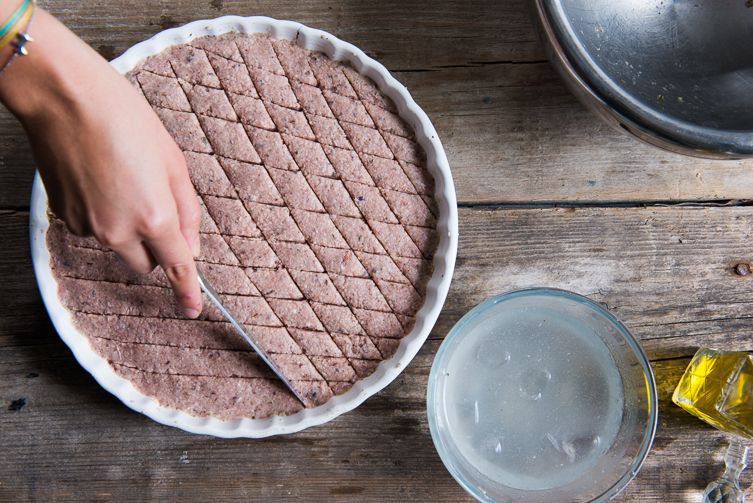 What I received that day were mere instructions, not at all a recipe. After all, like many Middle Eastern cooks, she cooked with nafas -- her “breath” or “flair.” Literally translated, it means “one that has a good appetite for taste.” As the instructions came in Arabic, she said: “put 1 part meat, 2 parts bulgur (make sure it's the fine grade), soak it for a little while in some water, add a little allspice, a little salt. You know you have to taste and see...” She would continue like so. 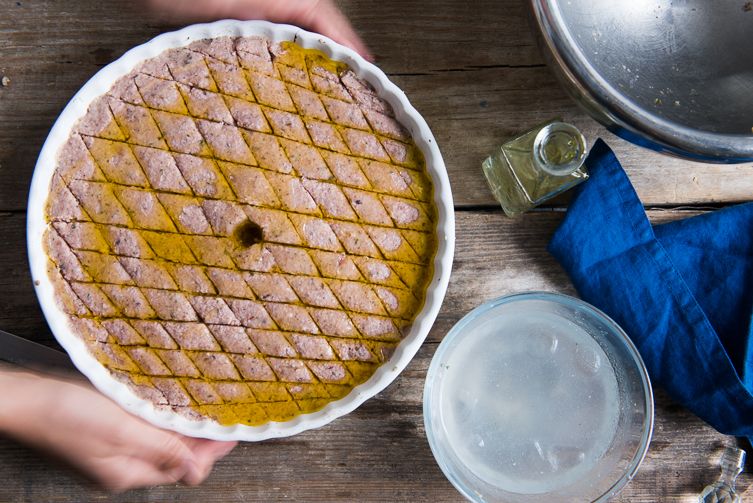 Twelve years on and after much time in more recent years spent with Amouleh, as well as traveling around Lebanon learning about the different kebbeh varieties and spices included, I have come to make my own version. I use my grandmother's and aunt's traditional technique with a bit more spice -- after all, she did always encourage me to taste and see. 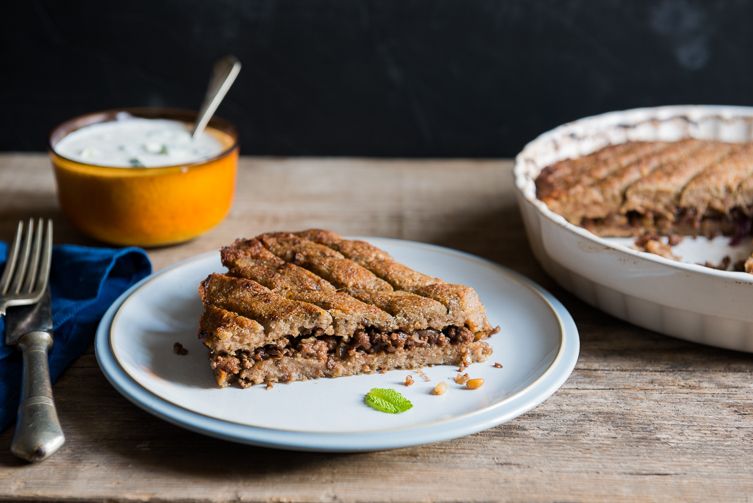 Hanine A. February 22, 2018
This is the best way to describe the relationship with kibbe! My favorite dish probably and especially paired with lentil soup! God bless our grandmas, mamas and aunties for the love of kibbe!😍

Abdurrahman November 27, 2016
I signed up here just to say thank you
the photos,the words,everything you posted here made me so nostalgic !! thank you for sharing your experience
Abdurrahman from Lebanon

Betty P. March 29, 2014
My ex was Syrian and your version varies a little from mine. I learned from my ex mother in law. It is terrific!! I use ground chuck (lamb is expensive) and lots of pureed onion. I also sauté some onions to put between the layers of the meat and wheat mixture. I use butter instead of oil which gives it a great flavor. I also pick my own grape leaves and make stuffed grape leaves. I would be curious if your recipe is close to mine. Thanks for this site. I will be sure to visit more often. Thanks again.

Lauren December 22, 2013
Thank you so much for sharing, Bethany. I've never attempted to make kebbeh and truthfully, I've only ever had the "torpedoes" at restuarants. My dad's side of the family is Lebanese and I decided for this years' Christmas party, I want to make baked kebbeh. I searched and found your recipe. I was really nervous and a little bit overwhelmed at first, but I'm now waiting patiently while my kebbeh is in the oven. It smells great and I can't wait to have some and surprize my dad's side of the family at the party tomorrow! Thanks again.

Daniela B. November 17, 2013
Really inspiring recipe. I wonder if i could use something else instead of pomegranate molasses and the very fine bulgur is like flour in texture?

Bethany February 10, 2014
The fine bulgur is a bit coarser than flour. You could omit the pomegranate molasses (it's easy to make at home- just 1 part pom juice and 1 part brown sugar boiled down to a syrup consistency)

Mari G. November 6, 2013
I love kibble, is this the same as when you make like little. Footballs and fry? Do you make the spice separate?

Bethany November 7, 2013
Yes, it's the same paste and the same filling. The recipe for the kebbeh "torpedoes" is in my cookbook Pomegranates and Pine Nuts (US) or The Jewelled Kitchen (rest of world). The book can be found on amazon or anywhere where books are sold.

bethan November 4, 2013
This looks amazing! I'm now wondering if you can make dried rose petals by yourself...

Bethany November 5, 2013
Yes, Bethan you can make dried rose petals yourself. We use wild rose in the Middle East which begins to appear in March/May. It's between pink and fuscia.

creamtea November 4, 2013
Yum. My daughter has been asking me to try my hand at kibbeh. Glad to have a recipe for this!

maye November 4, 2013
I love this. Reminds me of my own large middle eastern family. Thanks for the recipe.

Kitchen B. November 4, 2013
Love the story. Love the Pie. Love the photos too Beth. Love how I can relate with 'ringing' home for recipes :-)!