Winner of Your Best Chicken

Congratulations to Abbie C, whose Ethiopian-Inspired Spicy Chicken Stew won the contest for Your Best Chicken!

Describe an early food experience that has influenced the way you think about food and/or cooking.
When I was growing up, my parents never told me, "You won't like that," and I was never forced to finish foods I didn't like. As a result, there wasn't anything I wouldn't try or give a second chance to, and I'm not sure that my parents were prepared for all of the things I did end up liking.

I was also interested in making food: I helped my dad make meatballs for his spaghetti sauce, which was always from scratch and such a choreographed process, I watched my mom and grandmother bake, and I absorbed everything my aunt did in her kitchen when we visited her and my uncle. We also usually ate dinner together as a family.

During college, I was really inspired by my bosses at the patisserie where I worked and by their extended family who had been in the restaurant business for decades. They taught me so much about food, and being behind the scenes gave me a huge appreciation for how much skill and effort goes into making food that not only tastes good, but is also beautiful to look at. All of these things have made me the eating machine I am today; they’re the reason I value home cooking and the way food brings families and friends closer together. 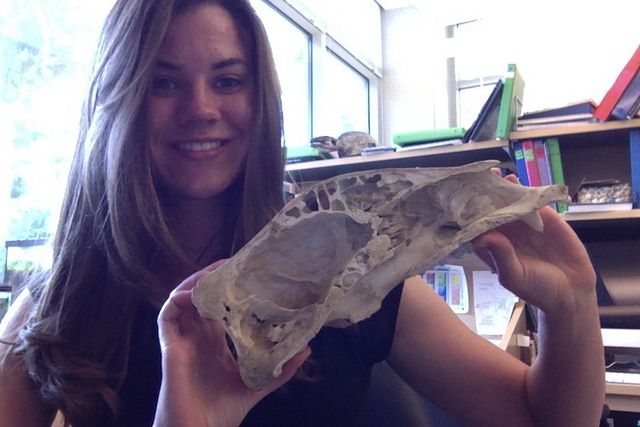 What's your least favorite kitchen task?
Searching the refrigerator for leftovers that have become science projects.

Your favorite kitchen tool?
It's a tie between my cast-iron skillet and KitchenAid mixer. The skillet because of its versatility and because cleaning it is such a ritual. The mixer because it was a thoughtful gift from a friend, and it just looks cool, like some kind of magic mechanical kitchen dinosaur that can make me desserts.

What is your idea of comfort food?
Chicken livers wrapped in bacon, beef stew with dumplings, and tuna casserole are my go-to comfort foods. Pretty much anything you would serve at a 1950's dinner party.

What is your greatest kitchen disaster?
A few years ago, I hosted a pie-making party where everybody brought ingredients and recipes, and I provided the kitchen and tools. We made sweet pies and savory pies, hand pies and traditional pies, deep-fried pies and baked pies. There was even a blind taste test to determine whether lard or butter resulted in a better crust (the answer is lard, duh!). The dishes piled up. There were dough chunks everywhere. It was a blast...and then disaster struck.

Some raw pumpkin chunks ended up down the drain, and the garbage disposal choked. The pipes under my sink started leaking. I tried to fix it, but the pipes were so old and corroded that they wouldn't reconnect. Gross pipe gunk went everywhere. There was nothing that could be done at that point, so we all just went back to eating pie. I ended up having no sink or dishwasher for a few days, and almost every dish I had was dirty, but I did have an endless supply of leftover pie, which made up for everything.

foxeslovelemons March 6, 2014
Your parents did it right. That's the way to get kids to have great palatte's - stop telling them they won't like stuff, and forcing them to just eat hot dogs and chicken fingers. haha.

Warmest congrats on your win!

Abbie C. March 7, 2014
I definitely agree! Thanks for the congrats!

ChefJune March 5, 2014
I loved the pie story! Congrats on the win. Amidst my scores of chicken recipes, I might be moved to make this. I love Ethiopean flavors.

Abbie C. March 5, 2014
Thank you! Glad the pie story is a hit! One of my shirts still has a stain on it from whatever came out of those pipes! I hope you enjoy the chicken if you make it!

aargersi March 5, 2014
Congratulations! Love the dish, love the disaster story. I like your name, too - heh