The History of Gumbo 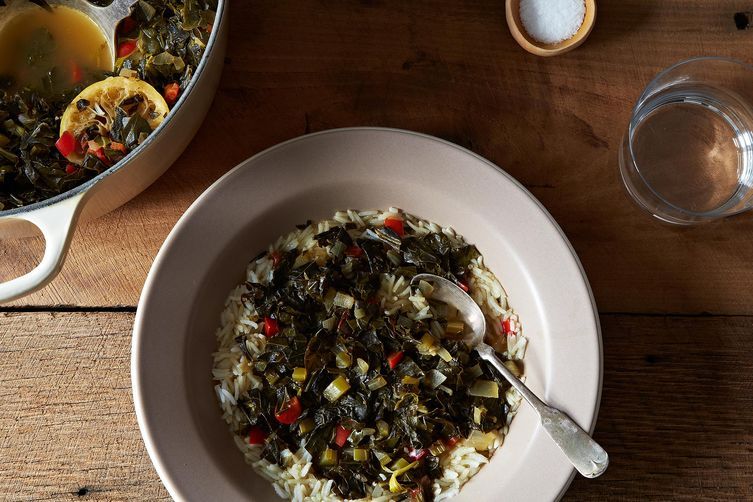 Gumbo is a living example of the myriad of cultural influences within Louisiana. While its exact origins are challenging to determine, there is much speculation of the history behind the dish -- a dish that could be considered the iconic Louisiana delicacy.

The state was originally colonized by French and Spanish settlers, and gumbo may have been a direct descendent of the French seafood soup bouillabaisse. The presence of roux, or flour-based thickener, is also distinctly French -- although gumbo roux is much darker than the French variety, having been prepared with flour that is browned in oil or fat of some kind. Spanish settlers contributed sofrito, the combination of onion, garlic, peppers, and tomatoes cooked in olive oil. In Cajun and Creole cooking, an iteration of this -- celery, bell peppers, and onions -- is known as “the Trinity,” and with the addition of garlic it becomes “The Holy Trinity.” The name “gumbo” itself is derived from the West African word for “okra”, which is an ingredient found in many versions of the dish. Native American Choctaws added filé (ground and dried sassafrass leaves) to the mix, which is frequently used in gumbos instead of or in addition to okra. 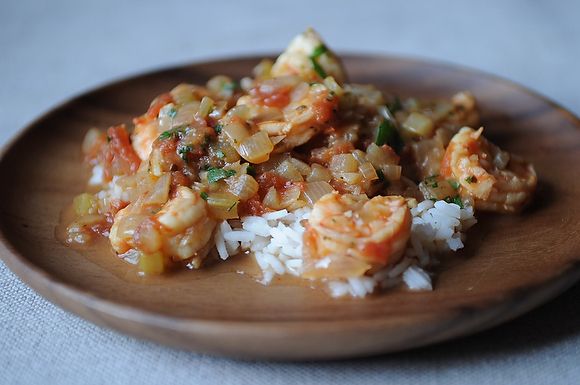 Determining the exact origin of gumbo is nearly impossible, as so many cultural influences are at play in Louisiana. It is widely agreed, however, that the dish originated in Louisiana in the early 18th century, and, according to Cajun history, the first recorded mentions of the dish are from the 19th century. Recipes include whatever seafood, meats, and vegetables were plentiful during the season. The Southern Foodways Alliance recognizes a number of gumbo recipes in The Picayune’s Creole Cookbook, published in New Orleans in 1901: “Among the principal ingredients are chicken, ham, oysters, turkey, wild turkey, squirrel, rabbit, beef, veal, crabs, soft-shell crabs, shrimp, greens, and cabbage. Some of the gumbos are made with okra, others with filé.” 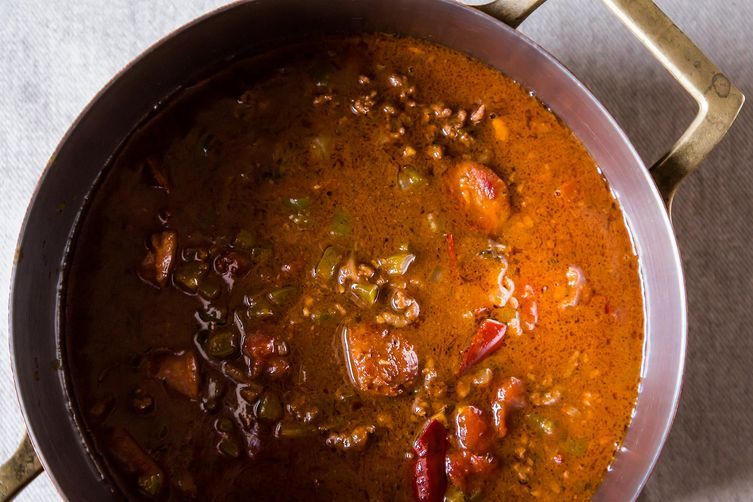 To examine gumbo, one must also examine Cajun and Creole cuisine. The two traditional styles of Louisiana cooking come from two European groups who settled in the state. Cajun cuisine originates from French colonists who had settled in the Arcadia region of Canada and were then forced out by British. Many fled and moved to the swampy region of Louisiana in the mid-to-late 1700s, creating their own culture and distinctly rustic, country-style cuisine. Their style of gumbo often features filé, a dark roux, and spicy Andouille sausage alongside many other proteins and ingredients.

The Creoles descended from upper class French and Spanish who settled in Louisiana and colonized the area in the 1700s. Their style of cuisine is considered more refined, and their gumbo generally contains shellfish of some variety (and could be posited to be closer in flavor to bouillabaisse).

Whatever its distinct origin -- and if there even is one -- gumbo is integral to Louisiana cuisine. Each year, on the second weekend of October, the town of New Iberia, Louisiana hosts the World Championship Gumbo Cook-Off. At 6 AM on Sunday morning, the “gumbo police” make their rounds, signaling for the battle of the roux to begin. For people visiting the cook-off, organizers include this advice in the directions: “Roll your window down -- INHALE and follow your nose to downtown New Iberia. Aroma should get stronger as you get closer.”

Jenna S. April 6, 2014
In my family, we made two kinds: seafood gumbo (shrimp, crab, often with okra), or chicken & andouille (my favorite). We never mixed seafood with other meats. File is used in both. Our roux is a nice caramel color, but the gumbo itself has a thinner broth, we don't really do thick.

Denice T. April 5, 2014
Ahhhh the sublime !! My family rules at preparing gumbo..... their roux is almost black, exudes smokey deep flavor... grandmama boiled the shells and heads to make a rich broth, Heaven in a bowl!!!

JaneMiami April 4, 2014
Personally, I think we should all go there to meet and indulge! A sorta Food52 camp in Louisiana? How terrible would that be??

aargersi April 4, 2014
I did not know of the New Iberia gumbo fest. I want to go to there.