The History of Donuts in America

Today: Call them doughnuts, donut, sufganiyot, paczi, or all of the above -- we're uncovering the  history of this much-loved pastry. 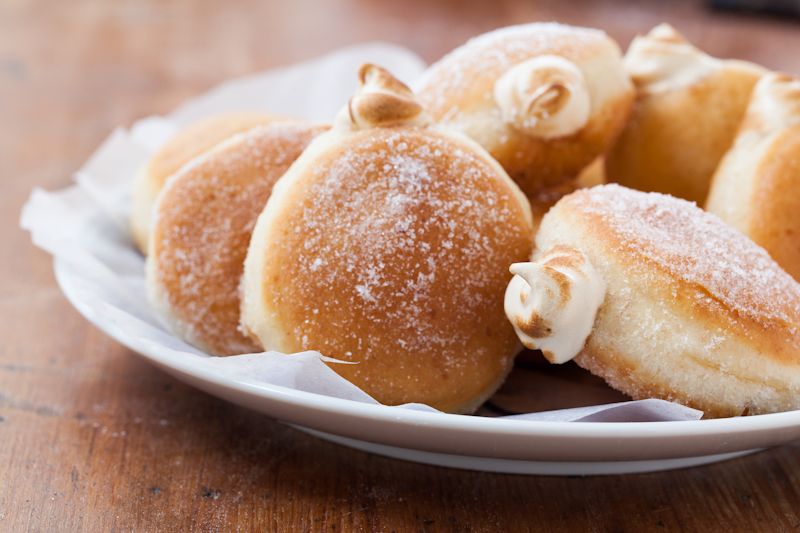 Donuts have a somewhat labyrinthine -- and, at times, shady -- past. From when they arrived in America, doughnuts have pulled themselves up by their bootstraps -- and, thanks to a rather ragtag bunch of characters, they are now one of the most iconic American pastries. In fact, Smithsonian.com notes that "in its democratic ethods, its optimism, and its assorted origins, [the doughnut] does seem rather quintessentially American."

Donuts have become the poster child of everyday indulgence thanks to a melting pot of influential characters, historical happenstance, and sweet tooths -- and many, many pans filled with hot oil. Dutch settlers introduced doughnuts to the U.S. when they ended up in Manhattan, then known as New Amsterdam. They called these doughnut predecessors "olykoeks," or oily cakes, which were fried in pork fat. Formed by dropping dough off the end of a spoon, their name evolved to "oliebollen," or oily balls, thanks to their irregular round shape. Unlike today, oliebollen were traditionally enjoyed during the Christmas season, and each cook had his or her own, individualized recipe.

More: What else is round, fried, and perfect for the holiday season? These smoky chickpeas.

So why don't we indulge in coffee and an "oliebollen?" Besides the fact that, no offense to the Dutch, "oily balls" is not an especially catchy name, there are a few theories. Some speculate that the term "doughnut" could refer to the nuts the desserts were often stuffed with, or the "knot" shape into which they were sometimes tied. We assume the "donut" abbreviation came out of pure, old-fashioned laziness -- and the American love of shortening every word in sight. 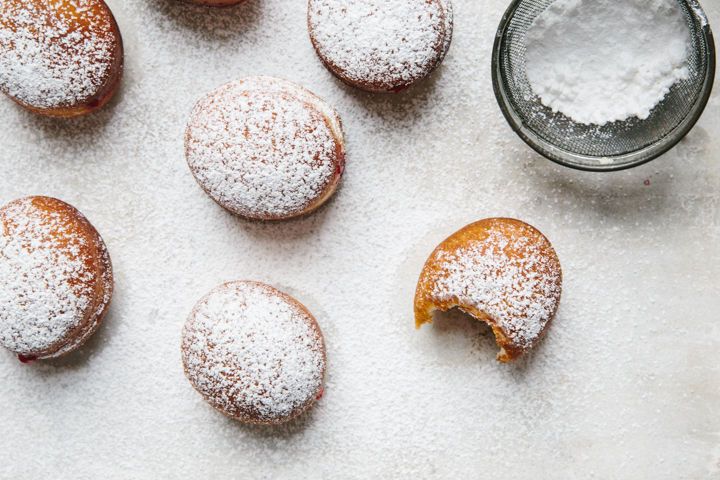 While we know who introduced the doughnut to American soil, the story behind the doughnut hole is a bit less clear-cut. The most likely (and mundane) explanation is that the doughnut hole was brought about by pure necessity. At some point, bakers started adding egg yolks to their recipe, which yielded a richer dough. However, this meant that the doughnuts' center no longer cooked at the same rate as its edges, resulting in doughy, raw centers. Solution: Remove the chubby middle, and the doughnut cooks into a perfectly rich, crispy pastry.

However, there is a more entertaining, whimsical story behind the doughnut's hole: In the mid-nineteenth century, there lived a woman named Elizabeth Gregory who made a darn fine olykoek. She spiced hers with nutmeg, cinnamon, and preserved lemon rind -- and would pac them up for her son, a sea captain, to help him ward off scurvy and hunger on long ocean voyages.

It is her son who claims credit for inventing the doughnut hole. As he tells it, he was steering the ship through some especially treacherous seas and had taken along some of his mother's pastries for nourishment. Since he had to keep both hands on the ship's wheel in order to keep her steady, he had no choice but to stick the doughnut onto the spokes of the wheel to keep them within reach. Believe what you will, but whoever invented the doughnut hole probably had no idea what a cultural icon they'd just created.

More: Whatever the reason, we're glad he did -- that means more doughnut holes for us! 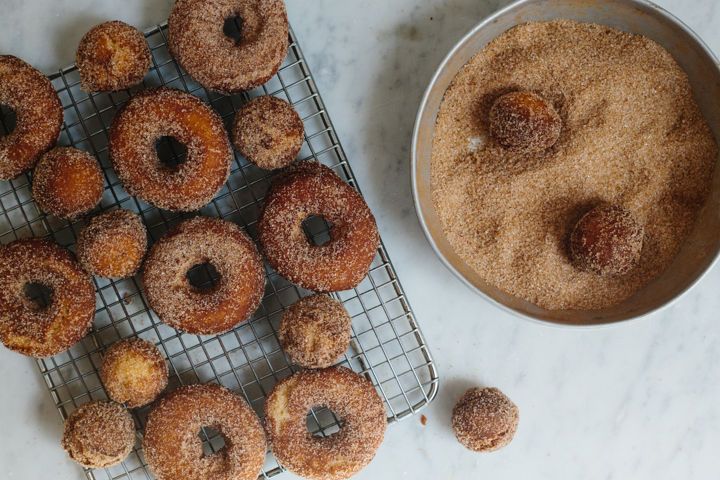 From its humble beginnings, doughnuts slowly began to climb up the culinary ladder towards national domination. First step: mechanization. In 1920, Adolph Levitt, a Jewish refugee from Czarist Russia, invented the first doughnut machine. According to Saveur, his machine churned out 80 dozen doughnuts per hour -- and made fresh-from-the-fryer, consistently identical doughnuts readily available to the public. This innovation also cloaked doughnut production in an aura of spectacle. Hungry crowds could jostle shoulders, watching as the dough rings turned golden in oil before being pulled out, dusted with sugar, and distributed.

However, it took a war for the doughnut craze to truly catch on. In World War I, women volunteers, known as "Doughnut Girls," would serve up the sweet confections to American soldiers in the trenches. When the soldiers returned home to the States, the love of doughnuts stuck. During the Depression, doughnuts were the everyman food. They were cheap enough to be purchased for most Americans, and were served with a paper that read "As you go through life make this your goal: Watch the doughnut, not the hole." When immigrants arrived at Ellis Island, they were greeted by Salvation Army with a blanket and a doughnut. It was, quite literally, their first taste of America.

Today, doughnut shops have taken over our street corners. From Dunkin' Donuts to Krispy Kreme, doughnuts, from cake to glazed, doughnuts are intimately intertwined with American culture. While you can still easily find cheap, readily-available (though not always high quality) doughnuts, they have begun to creep into the category of "gourmet." Where once they turned to éclairs and petits-fours, artisinal pastry shops are looking to the doughnut as their next canvas for culinary innovation (cough, cronut). However, though they may be the retro darling of hip bakeries, doughnuts will always be there for the everyman -- as long as we have oil, yeast, and sprinkles. 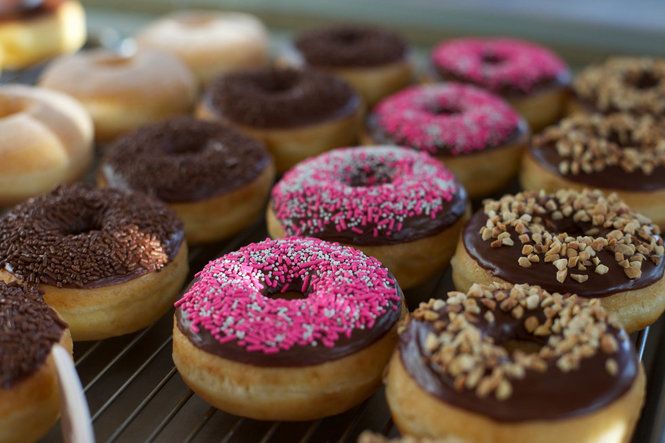 Photos of sufganiyot and apple cider doughnuts by Yossy Arefi, photo of meringue-filled doughnuts by Lara, final photo by The Oregonian.

sanscravat October 13, 2014
Early Dutch doughnuts were yeast-raised, so were fully risen before being dropped in hot fat. When chemically-raised batters began to be used, in the early nineteenth century, the middles wouldn't rise properly during frying -- so the holes were cut to reduce the volume-to-surface ratio, allowing all the batter to cook evenly.