Today: A new kind of French toast -- with the works. 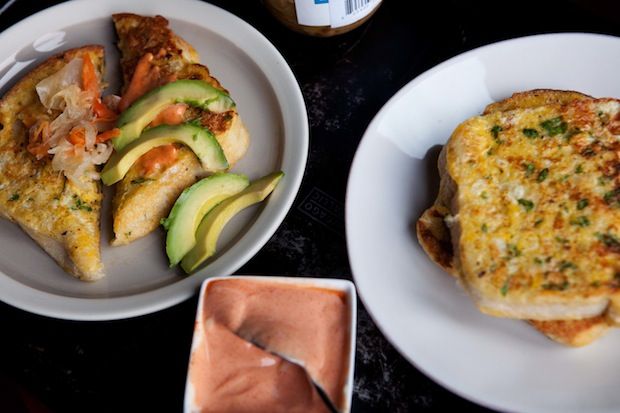 I vividly recall the first time I saw someone treat French toast as something savory. It was my freshman year of college. They served French toast in the dining hall every Saturday for brunch. Apart from granola, it was one of the few semi-edible substances available there. Anyway, one Saturday morning as I brought my tray of food to a table, I saw another student squirt ketchup all over his French toast.

I was appalled. For about 30 minutes. Then I realized that if there’s no sugar added to the egg dip, there’s nothing other than the maple syrup topping to make French toast sweet, and if you don’t make it sweet then it’s not far off from an egg in the hole (toad in the hole, egg in a basket, whateveryoucallit), which is a grand breakfast. After that I forgot about savory French toast for a number of years, until aliyaleekong’s brilliant Crispy Salt and Pepper French Toast won a wildcard on this site. Suddenly, I had to give it a try.

From that base, I started fiddling -- just a bit. Mostly I started varying the toppings. I started by switching out the ketchup for sriracha. Then I added avocado, because if avocado is good on a fried egg sandwich, it’s obviously going to be good on savory French toast. Then, I added the ketchup back in by mixing it with the sriracha and some mayo to make a delicious pink sauce. Then I entered my kimchi-at-breakfast phase and added that too. It’s savory French toast with my version of “the works,” and I think it’s perfect. Until I decide to add something more. (Suggestions are welcome.) 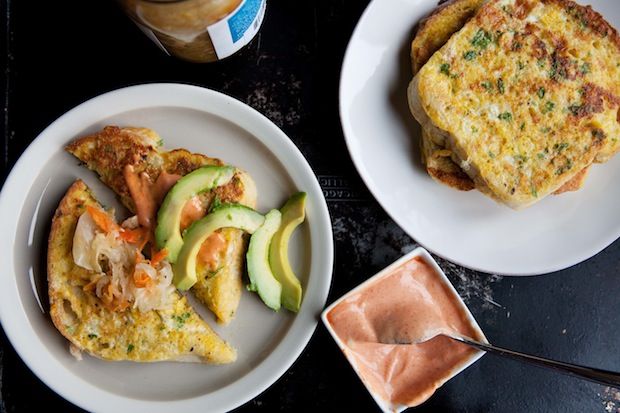 Gaia G. May 22, 2014
Brilliant! Egg works wonders in Asian cuisine and I definitely eat kimchi and sriracha with egg fried rice and egg foo yung. Of course it will pair well with savory French toast. I'm trying this at my next brunch.
Author Comment

aargersi May 22, 2014
Family invasion this weekend and this just moved to the A list of things we must cook and eat. I might go south of the border and switch it up with queso fresco and pico de gallo or xni-pek
Author Comment