Today: A surprising, savory granola for even the most reluctant salad eaters. 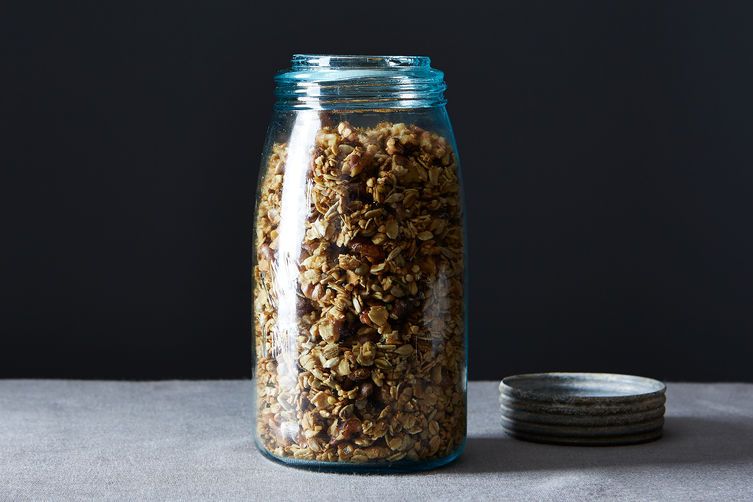 This granola began as a solution to a problem and that problem is salad.

This raises a couple of questions: Why is salad a problem? And why are granola and salad in the same sentence?

We will take these in order. First, only someone who is not a child could ask the first question. This column is firmly against the conceit of child-friendly food: it takes the controversial position that children are people too, and that children should be fed people-friendly food. (It thinks the science is still out on whether children have separate dessert stomachs, though.)

But any child will tell you that salad was conceived by someone who loathes children. (Someone with the last name of salad, presumably.) Not salads with chunks of roasted vegetables and nuts and cheese and other easy-reader foods. I mean the sort of elegant, refined spring salad that is almost nothing but baby leaves and herbs and a bare minimum of dressing. It is all texture and grace and subtlety. And if you serve it to a child, he will assume it is a practical joke and wait for you to bring him some actual food because seriously. 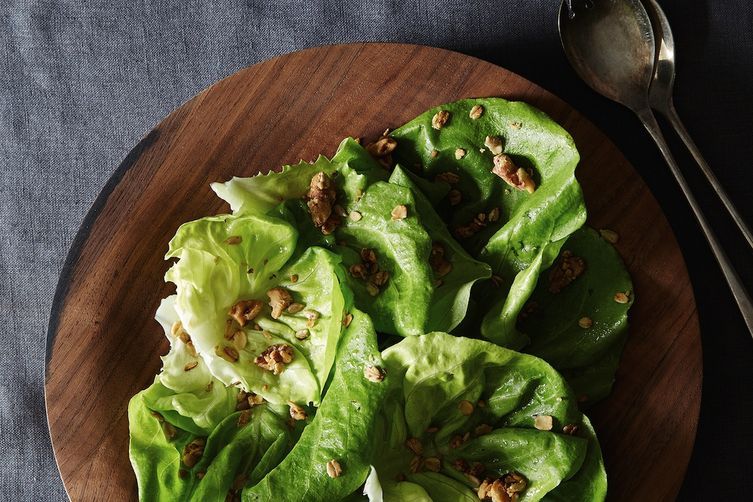 This brings us to the second question, and my thought that if I put Cheetos on the salad, they might eat it. But I knew that only credentialed avant chefs can pull off that trick -- if someone like Grant Achatz puts Cheetos on a salad, that’s OK because he is really putting the idea of Cheetos on the salad. You need a sturdy conceptual superstructure to support the weight of the Cheetos, in other words. My kitchen did not come with a sturdy conceptual superstructure, despite my listing it on our wedding registry, so I had to rethink.

So: granola. Disrupting granola has been restaurant shtick for a while now, which makes sense. Granola is all form and no content: you can fill its frame with just about anything. (Pickled mango. Black pepper. Matzo. Maybe even Cheetos.) I wanted a simple savory granola—lots of nuts and seeds, a few herbs—to sprinkle over a leafy spring salad. Something to give a salad some crunch, a little fat and a little salt, a new and improved crouton. Besides, all children are capable of eating every crouton in a bowl of salad without even accidentally consuming a speck of non-crouton salad. (It’s a test they have to take to get their child license.) I wanted something that mingled with the leaves—you want the granola, you get some baby spinach with it. And then you learn to love baby spinach and request it at every meal and for your birthday dinner.

That last part: still in process. But the granola-plus-leaves idea? It clicked, for all age groups.

The version below is a rosemary and walnut mixture, but it goes without saying that this a highly flexible recipe. It’s more about ratios than ingredients. The specific ingredients are yours to be specific with. That said, a note on sweetness: it turns out that granola with no sweetener at all is little too savory, which is why there’s a touch of maple syrup here. It’s enough to make it a surprisingly suitable morning granola (given how preposterously sweet granola tends to be, this is almost palate-cleansing by comparison).

What we didn’t eat with the salad, we had with yogurt for breakfast. Without foliage.

Fairmount_market June 6, 2014
What a great idea! Thanks for the inspiration.

bookjunky June 5, 2014
Can't really do a savory granola myself -- I don't even like croutons -- but this is a very clever idea. My salads have cheese and finely chopped TJ's candied pecans. Possibly another way to encourage a child to eat a salad...

My immediate thought re: getting kids to eat salad was, wrap something else in it, like a taco/asian roll kind of thing. So they learn to eat the lettuce that way. Of course, I myself completely failed on this as I basically always considered feeding lettuce to children a lost cause and not one that could be creatively solved. Your children are possibly still young enough to be malleable.

RLRL June 5, 2014
My son's friend was eating with us the other day and when he sat down to the table he jumped, gave a little start, and exclaimed, "You eat leaves?"
Author Comment

aargersi June 5, 2014
OK well clearly I am making this today, now, because yum.