Today: Bacon was once thought to be perfect, impossible to improve -- until now. 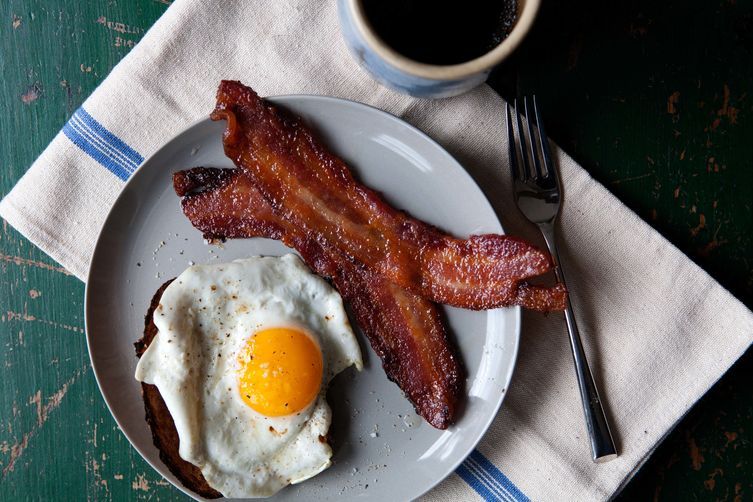 Flashback to this past January: We had a three-month-old who didn’t sleep more than one to two hours at a time. Ever. But we decided it would be a good idea to invite our friends over for a New Year’s brunch so we could see everyone.

This was an entirely selfish move on our part: At that point, we still hadn’t really developed the necessary skills for getting out of the house with a baby -- so why not make the people come to us? And bring us food as well? My culinary contribution to brunch was making my husband go out and get one of those cardboard containers of to-go coffee. Our friends, happily, stepped up and provided the food.

More: Read up on the best way to cook bacon.

Perhaps because of my sleep-deprived fog, I don’t remember a thing that we ate -- except the bacon. Our friend Ryan brought a plateful of thick-cut, crispy bacon -- brilliant in its own right -- which he had cooked with a bit of sugar and spice so that each bite hit every one of the most addictive flavor notes: salty, smoky, sweet, spicy, and bacon-y. We went at the plate like a pack of hungry wolves, and when the dust settled we all asked, “What was that?!” 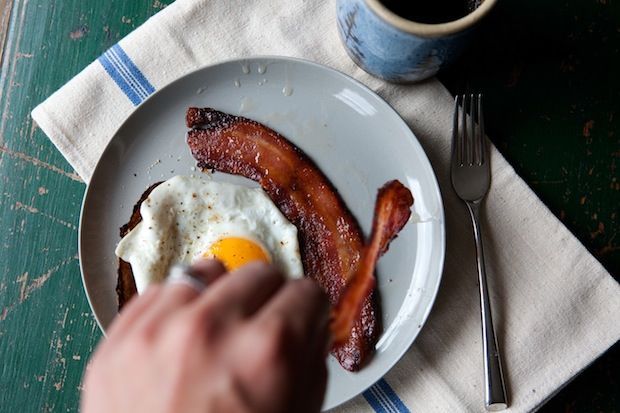 Ryan looked both slightly smug and slightly abashed when he told us that his bacon is embarrassingly easy to make. It’s the perfect brunch dish to make you very popular while requiring almost no work on your part. Just rub or brush thick-cut bacon with a combination of sugar and spice, then bake until it's crispy. I’ve played with a couple of variations since then, and this is my favorite, with maple syrup for sweetness and Sriracha for spice.

Serves about 4 to 6 as a side dish

Jaye February 7, 2015
This stuff is evil-good! And easy to make! I'm wondering if this sauce would work well on pork ribs.

jackandlily August 7, 2014
Stop what you are doing and make this right now...it's amazingly delicious. My thighs and heart thank you.

AntoniaJames July 11, 2014
Thinking I might adapt this, next time I make carnitas using bacon ends (a treat from the meat vendor at the farmers' market); for more info, see: https://food52.com/blog/4150-an-everlasting-piece-of-pork-belly-antoniajames
;o)
Author Comment

aargersi July 10, 2014
Pig candy. Yum. What could be better? Add me to the "making it this weekend" team.
Author Comment

molly Y. July 10, 2014
what is a delivery service that will BRING THIS TO MY MOUTH
Author Comment

fiveandspice July 13, 2014
Maybe there's a truck headed across the state that would agree to carrying some bacon. I don't think it would make it there though, too many bacon thieves! ;)

Allyn July 10, 2014
I used to make bacon with brown sugar and cayenne, and oh man, now I need to make a batch this weekend. SO GOOD
Author Comment

fiveandspice July 13, 2014
Yes! Brown sugar and cayenne was where these started, and then I started making adjustments from there.

inpatskitchen July 10, 2014
Oh my! This one's on the menu this weekend. Thanks so much for sharing!
Author Comment