Cucumbers and 11 of the Best Ways to Use Them

Today: Cucumbers are mostly made of water, but these crunchy cucurbits have more substance than you might think. 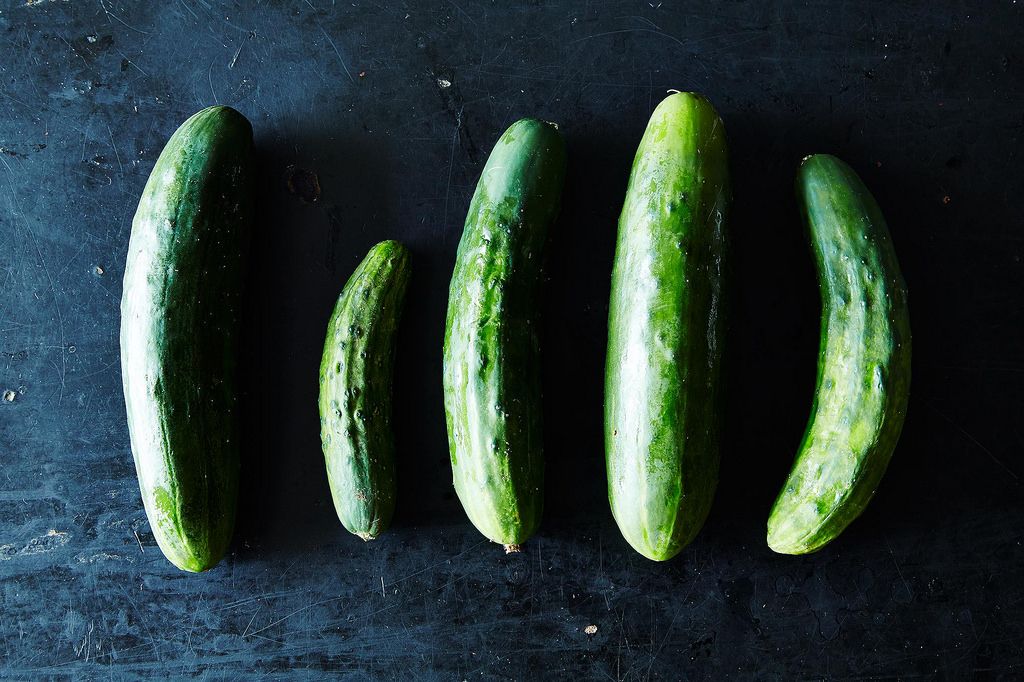 When you’re at the market looking for cucumbers, you are generally going to be choosing between varieties grown for either pickling or slicing. Slicing varieties (2, below) are usually consumed fresh; they’re longer and thicker in diameter than pickling varieties, and have smoother skin. (Slicing cucumbers procured at grocery stores might have shinier skin too, due to a a coating of wax; fresh from the field, a ripe cucumber will have dull green skin.) Pickling varieties (1, below) are meant for -- wait for it... -- pickling! They are shorter and smaller in diameter than slicing varieties and have bumpy skin. They also often have little spines that easily brush off with a dry towel.

You also might come across cucumbers described as "burpless." These cucumbers are bred to avoid the, um, gastric discomfort that some people experience after eating cucumbers. Of course, as Deborah Madison explains, the qualities of all three varieties (slicing, pickling, and burpless) can overlap in a single cucumber: "It’s possible to have a cucumber that can be enjoyed raw, pickled, and is also burpless. It is also possible to treat pickling cucumbers as slicers, albeit peeled first, but slicers don’t make good pickles for long-term storage.” 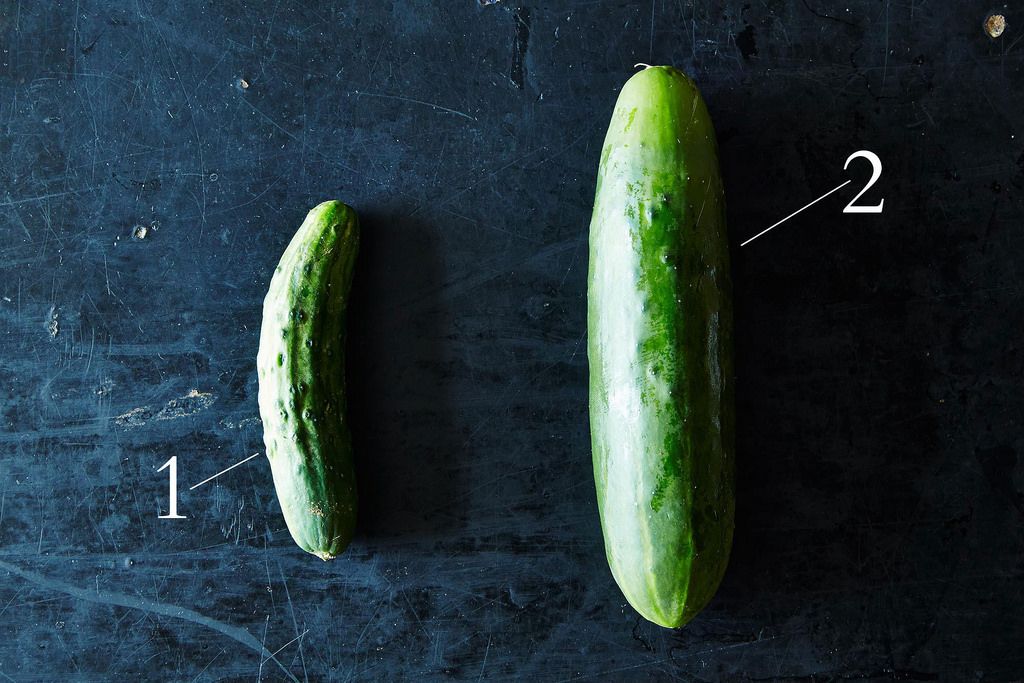 Cucumber flesh is a shade of the palest green (3, below) that rings around small edible seeds. The peel is edible too, but oftentimes recipes will call for the removal of both seeds and peel, mainly for textural reasons.

Occasionally you’ll get the unpleasant experience of biting into a bitter cucumber. That bitterness is from a group of chemical compounds called cucurbitacins; they’re present in all cucumbers (and other members of the Cucurbitaceae plant family), but normally at a low level, so you don’t experience a bitter sensation. Higher levels of cucurbitacins in cucumbers are often due to environmental stress, improper storage, or over-maturity. There are a few strategies you can try to help reduce bitterness: rubbing salt on a cut end of a cucumber, employing a special peeling technique, or slicing off one end of a cucumber and rubbing the cut pieces together, as Panfusine has always done. 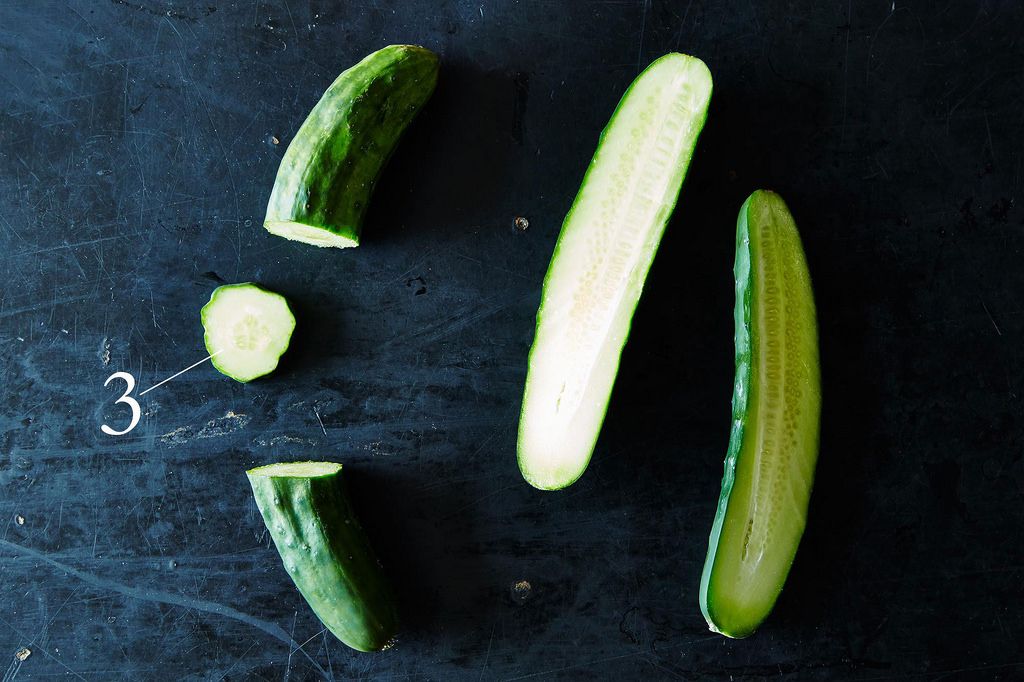 If you’re growing your own cucumbers, get into the garden and pick them regularly. If you neglect your crop, the over-mature cucumbers left on the vine will slow the plant’s production. Whether you procure them from your backyard or your local farmers market, cucumbers store best at 55° F, a hard temperature to find in most home kitchens. So store them either on the counter, or on a higher shelf in your refrigerator (which tend to be warmer than lower shelves) and use them within a few days.

Once you're ready to eat your cucumbers, start with one of our 11 favorite ways to enjoy them:

Tell us: How do you like to use cucumbers?

ZingersMom September 3, 2014
Try cucumber water. Simply ice water infused with seeded slices of cucumber. I use them on sandwiches, in salads, on crudite platters. Plan to try refrigeratory pickles this year.

Alex T. August 25, 2014
When I pickle cucumber I do choose the thin and small ones, cause they stay crunchy even after one year in the jar.

Winifred R. August 24, 2014
I made two batches of bread and butter pickles (with added hot peppers) and three quarts of refrigerator pickles this year. In addition I made home made pickle relish. We still have pickles, but the flush came on in June in Tidewater Virginia and I've just pulled all but one plant. We've had salads, and added to sandwiches, too - wonderful in bahn mi.

Elaine H. August 24, 2014
Saute them in a little butter, sprinkle them with salt and dill, and serve with salmon.

Susan August 24, 2014
With cucmber production at full speed in my garden, I am turning them into pickles, eating them in salads (a favorite combo is equal parts cucumber, tomato, and avocado dressed with a splash each of olive oil and balsamic vinegar). With the next picking - scheduled for tomorrow - I plan on chopping up a bunch and using them to infuse gin for a late summer cucumber martini.