Today: A food truck favorite heads into the kitchen for a morning makeover. 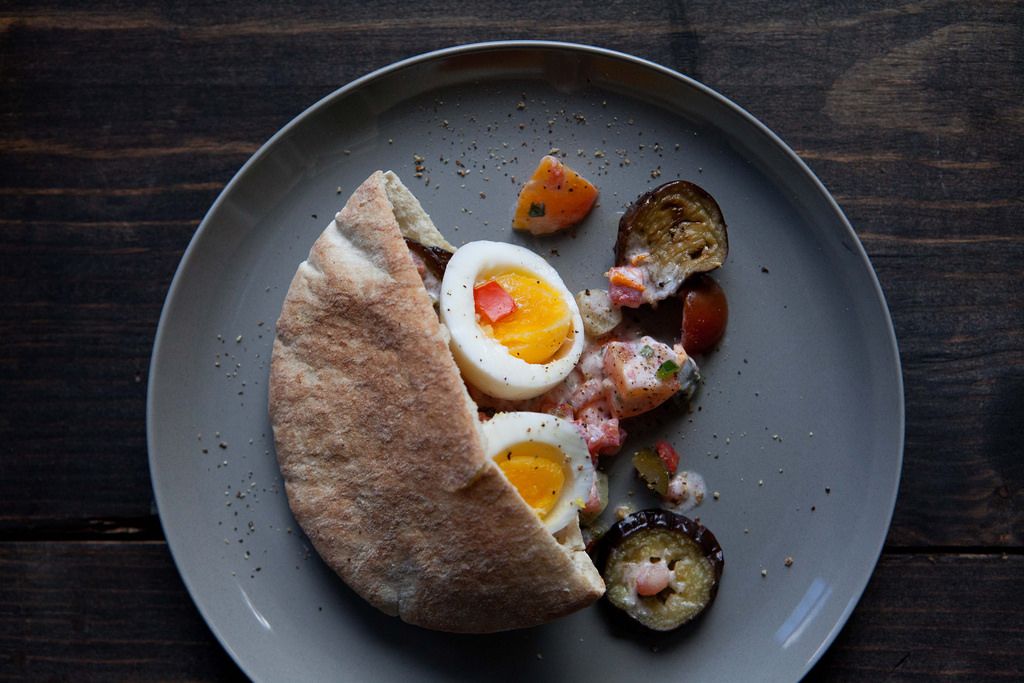 I was living in Boston when the food truck phenomenon really started to take off. With the help of a city-wide competition between trucks vying for parking spots at Government Center, the food truck scene went from "guys selling fried dough and sausages in front of subway entrances" to "chefs and grad students and farmers selling everything from schmancy ice cream sandwiches, Vietnamese noodle salads, or gussied-up grilled cheeses, to popovers and rosemary sea salt French fries." And it all seemed to happen overnight.

One of the earlier food trucks to appear specialized in overstuffed, seasonal vegetable-oriented pita sandwiches. It swiftly became a beloved lunch destination. They had (and, I believe, still have) one sandwich called the egg and eggplant sandwich that I always wanted to try, but for reasons too complex and dull to talk about here, I never wound up getting one. This sad dietary omission has been haunting me lately, so I decided to google “egg and eggplant sandwich” to see if the internet could help me come up with my own.

More: Learn how to boil the perfect egg. 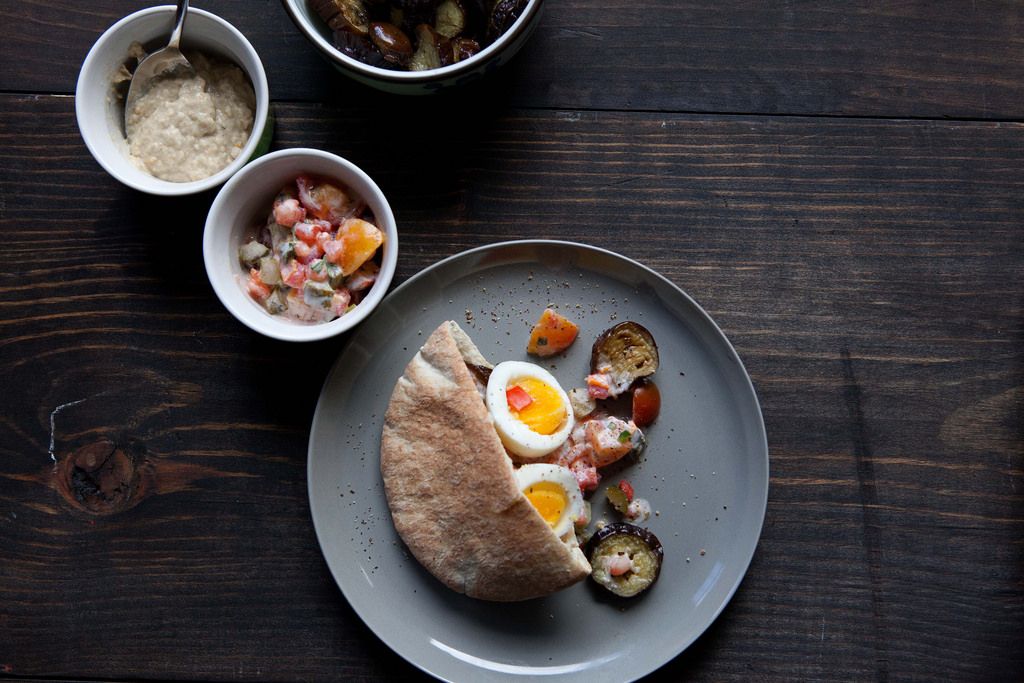 That’s how I discovered that the egg and eggplant sandwich is actually a classic Iraqi-Israeli dish known as sabich (or sabih). And the reality of the sandwich is even more delightful than what I had expected. It is layer upon layer of flavor tucked into (or atop) a pita -- fried eggplant and sliced hard-boiled egg, hummus, chopped cucumber and tomato salad, mango pickle, herbs, sauces -- basically all the good things in the world in a single, messy pile. I found a version in the cookbook Jerusalem that is mind-blowingly good, but also on the complicated side. So I tweaked it, drawing on a few other versions I found, and simplified it -- it’s especially simple if you do some of the steps ahead of time, like the night before -- to turn it into breakfast.

susan G. May 7, 2016
I've had a mind-expanding Sabich, in a Nyack NY restaurant owned by Israelis. I tracked down some recipes, and made amba from a f52 recipe (or sometimes one from Herba-something blog) - both easy to make if you can get mango. I never have all the parts at once, but whatever I do, it tastes great. You've got some good twists for the next one!

healthierkitchen September 18, 2014
LOVE Sabich!! Great version! I also roast the eggplant - in season, I just roast one or two at a time and just keep the pieces for use in salads all week. Needs tahina and amba, though! I don't know if you can get Soom tehina where you are, but it is delicious. Amba is pickled mango which seems just like some Indian versions that I've made from this site. More cultural fusion? Glad to know there's a place in Boston to get one! There are a couple in NYC, but I've only tried Taim.
Author Comment

fiveandspice September 20, 2014
Yes you are definitely supposed to have pickled mango!!!! I have no easy source for pickled mango in good old northern Minnesota, and I haven't actually had a chance to try recipes for it that are on this site, but I need to. My horribly non traditional substitute was the combination of jalapenos and pickles, hehe. Not at all traditional, but I actually really liked how it tasted!

molly Y. September 18, 2014
yessss!!!!! now can there be a tutorial on how i pronounce "sabih" without sounding silly? i have tried (and failed) many many many times.
Author Comment

fiveandspice September 20, 2014
There is no way to say it without sounding silly unless you happen to actually speak Hebrew. Then you're in luck.

Sara S. September 18, 2014
Oh my goodness, how I wish this was my breakfast today. Tomorrow!
Author Comment

lastnightsdinner September 18, 2014
CLOVER! Gosh, I miss them. I used to hit up the truck across from South Station almost every morning on my way in to the office.
Author Comment

fiveandspice September 20, 2014
Yeah, they're pretty awesome! I had friends in grad school who stopped by for their chickpea fritter sandwich almost daily!