How to Make Banana Butterscotch Pudding

Every other Friday, Yossy Arefi from Apt. 2B Baking Co. shares dessert projects that demand a little extra time and effort. Because your weekends should always be sweet.

Today: Ready your spoons (and your Nilla wafers) -- butterscotch meets bananas in a delicious riff on the classic. 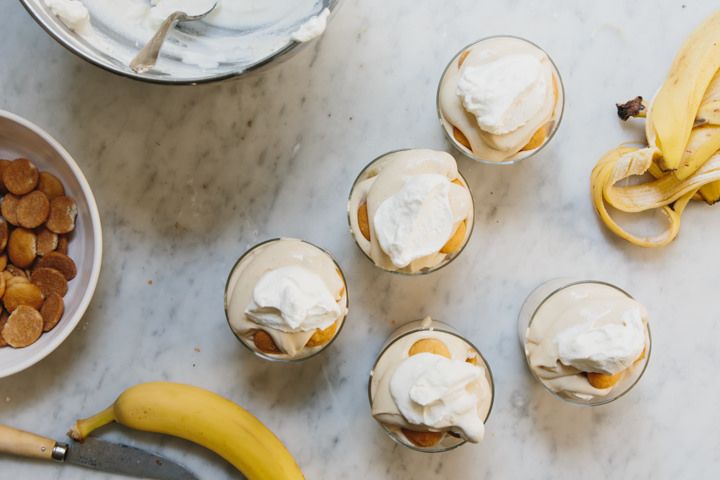 There were a few years where, thanks to Sex and the City, New York's Magnolia Bakery had a bit of a cult following. People would line up around the block for a box of pastel frosted cupcakes, just like Carrie and Samantha! The bakery was so busy that they even had to hire a bouncer for a while to protect the tiny West Village shop from overeager Sex and the City mega-fans. I had a friend who worked for Magnolia during its heyday; she said that by the end of the day, she didn’t even want to look at another cupcake, but she always made room for a bite or two of banana pudding.

Magnolia’s recipe was published in their cookbook years ago, so when I had the hankering to make some banana pudding of my own, I looked in that direction. I was totally surprised to find that it used vanilla pudding mix (gasp!) and called for sweetened condensed milk (double gasp!) instead of milk. Now, I’m not knocking sweetened condensed milk (or instant pudding for that matter), but the combination of the two sounded like sweetness overload to me -- so I went in a slightly different direction. 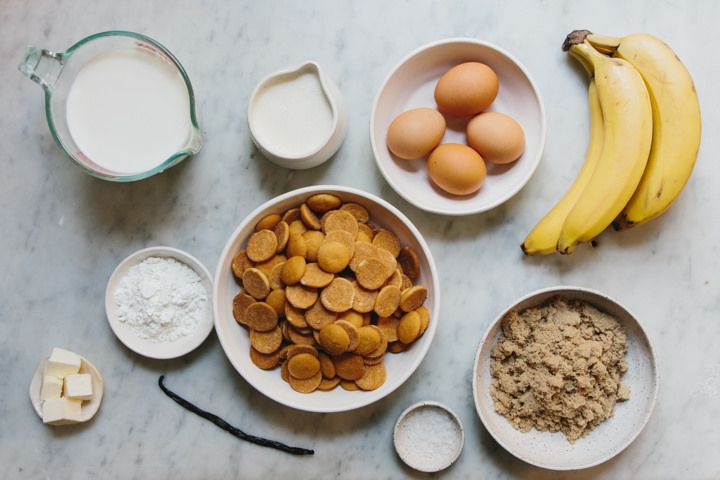 This banana pudding has the same basic structure as Magnolia’s. It's got pudding, bananas, Nilla wafers, and whipped cream, but instead of vanilla pudding from a box, I’ve whisked up a deeply flavorful butterscotch pudding. No need to try to bake your own cookies, though; there is no adequate substitute for Nilla wafers.

More: Spike butterscotch with balsamic to make a sauce that you'll want to drizzle over everything. 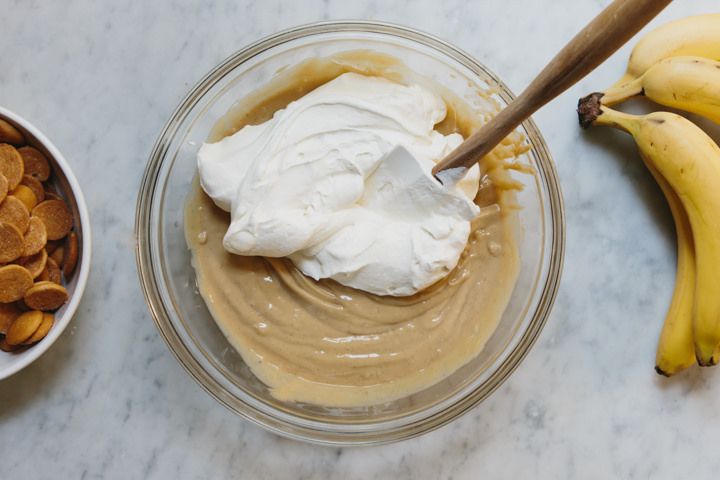 For the butterscotch pudding:

Combine the granulated sugar and water in a medium saucepan. Cook over low heat until the sugar dissolves. Turn the heat up to high, then cook the sugar until it is dark amber in color. Remove the pan from the heat, then carefully whisk in the heavy cream. It will spit and sputter quite a bit, so watch your fingers! 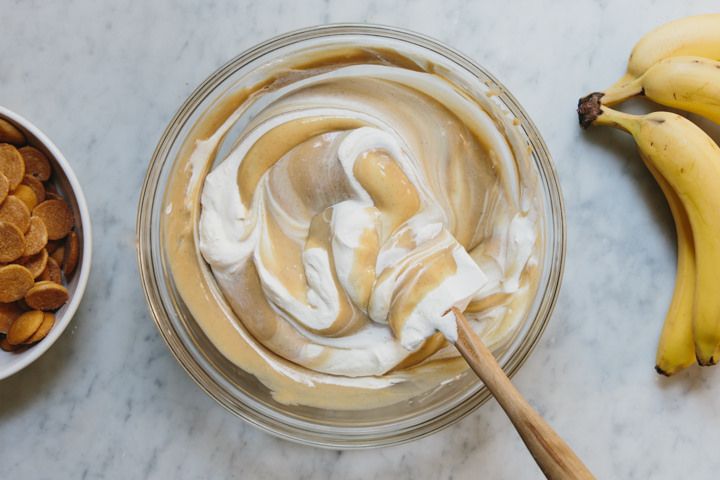 Mix the brown sugar, cornstarch, and salt in a saucepan. Whisk in the milk. Cut down the length of the vanilla bean and toss that in the pan too. Turn the heat to medium-high and cook the mixture, stirring constantly, until it thickens and comes to a boil. Carefully remove the vanilla bean pod and squeeze all of the seeds into the milk. Rinse the pod and save it for another use.

More: Not sure what to do with your spent vanilla pod? Dorie Greenspan has five ideas for you. 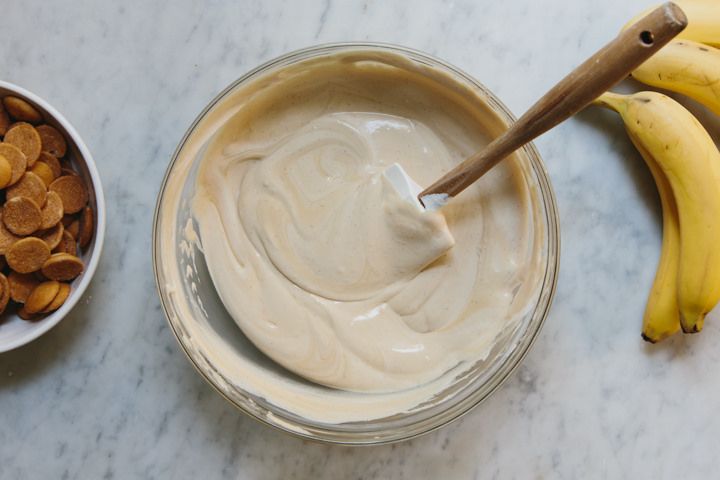 In a bowl, whisk the egg yolks and warm caramel sauce together. Whisk the egg mixture into the milk mixture and cook over medium heat while stirring constantly until the mixture comes to a simmer. Whisk in the butter.

Remove the pudding to a bowl and press a layer of plastic wrap on the surface. Chill completely. 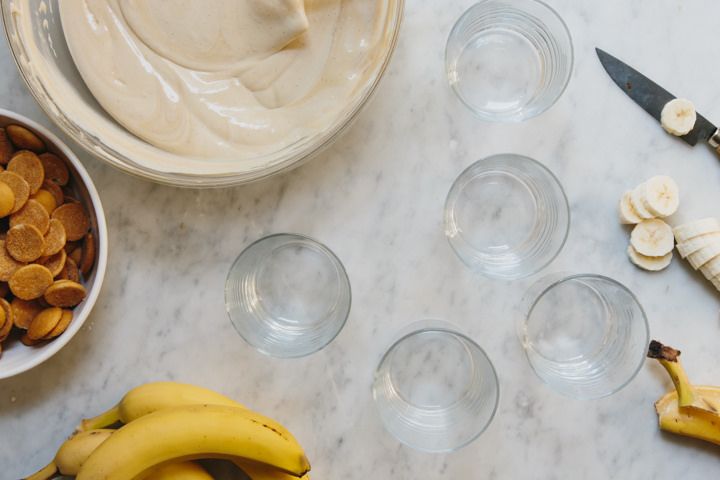 To assemble the banana pudding, whisk the chilled butterscotch pudding until smooth. Fold the whipped cream into the pudding, reserving a few spoonfuls to top the finished pudding.

Layer the pudding, Nilla wafers, and sliced bananas in a 9 x 13-inch dish, in a trifle dish, or in 12 individual clear glasses until all the ingredients are used. Top with reserved whipped cream. Refrigerate the pudding for at least 1 hour before serving. 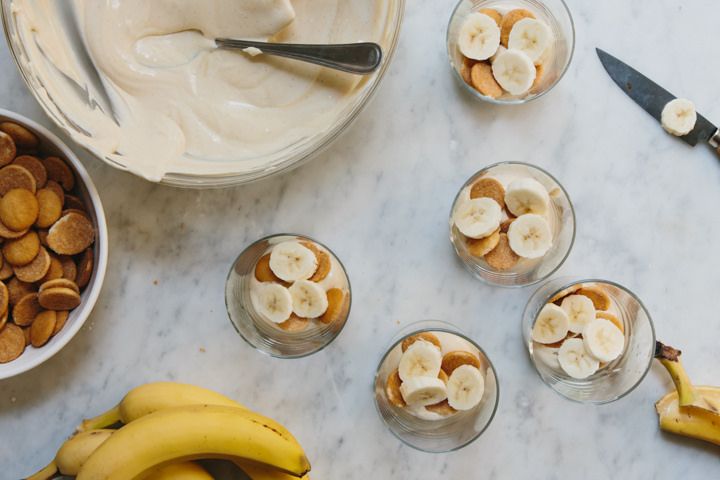 Cathy August 17, 2016
I’ve made this a few times now and it is wonderful. But I forget each time: when cooking the sugar and water at the beginning untilmit is amber brown—should it be stirred? Any advice would be appreciated.

CarlaCooks November 11, 2014
Oh my, this looks yummy! If you want to go with straight up banana pudding, I learned a neat trick from American's Test Kitchen for getting a great banana flavor without adding extract: infuse your cream with sliced banana. Just gently warm up the amount of cream used for the pudding with 2 bananas sliced into the cream. Once it comes to a simmer, remove from heat and let infuse for 45 minutes off the heat. Strain the bananas out of the cream and proceed with your pudding recipe using your now super-flavorful cream. Use the strained bananas in banana bread or something else (you don't want to use them in the pudding, but that doesn't mean they need to go to waste).

sheila November 9, 2014
love the recipe except for one thing Nabasico is using hydrogenated oil in the Nilla wafers.

jah510 October 31, 2014
Nilla wafers, sliced bananas, milk and sugar - my go-to faux banana pudding when I was a kid. It's delicious, but eat it soon after pouring milk on it. It takes on a bit of an unappetizing look when left to soak.