How to Make Frosted Cinnamon Rolls at Home

Today: If there's anyone who can make a mean cinnamon roll, it's Top With Cinnamon's Izy Hossack. Follow her recipe and you'll have the perfect holiday breakfast without the trip to Cinnabon. 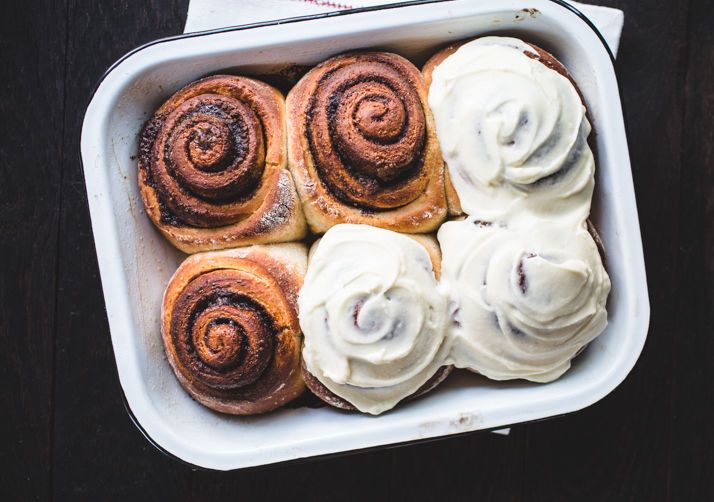 Being a daily consumer of cinnamon, you'd think that I would've been eating cinnamon rolls for a long time. But up until the age of 14, I actually hadn't even heard of them. Sure, there are pain aux raisins and Chelsea buns aplenty in local bakeries in the U.K., but neither is as good as a cinnamon roll in my opinion.

After trying a famous “American” cinnamon roll at a tiny shop near Oxford Street (it was the only one in London at that time), I dedicated myself to finding a way to make them at home. I used countless recipes, searching for that pillowy texture and gooey center coil. Each time, there were problems: the bread was too heavy, the filling seeped out, there wasn’t enough cinnamon. 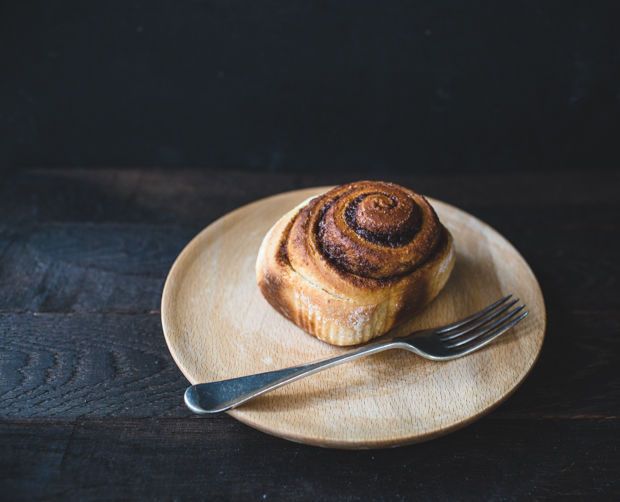 After a lot of experimentation, I found my favorite recipe -- and I slathered the finished rolls with cream cheese frosting for a super decadent finish.

I also picked up one of my favorite tips during my research, which is to use floss or string to cut the dough (it's complicated to explain, so I've included photos of the process below). This process means that even pressure is applied in all directions on the log of dough so the rolls don't get squished when you cut them. (The same method can also be used for cutting Swiss roll cakes neatly.) It's not really necessary, but it does make for very photogenic rolls.

For the filling and frosting: 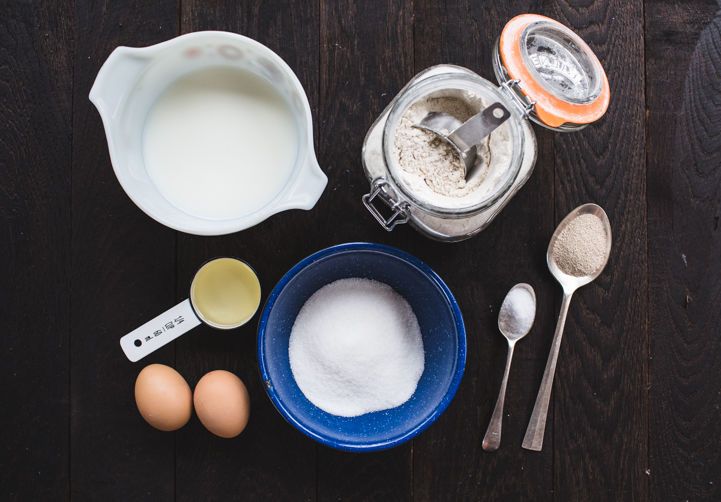 Make the bread dough: In a medium bowl combine the milk and boiling water. Stir them together and then add in the yeast along with 1 teaspoon of the granulated sugar. Stir and set aside for 5 minutes.

Meanwhile place the flours, remaining granulated sugar, salt, vegetable oil, and eggs into the bowl of a stand mixer. (If you don't have a stand mixer, just use a large bowl.) 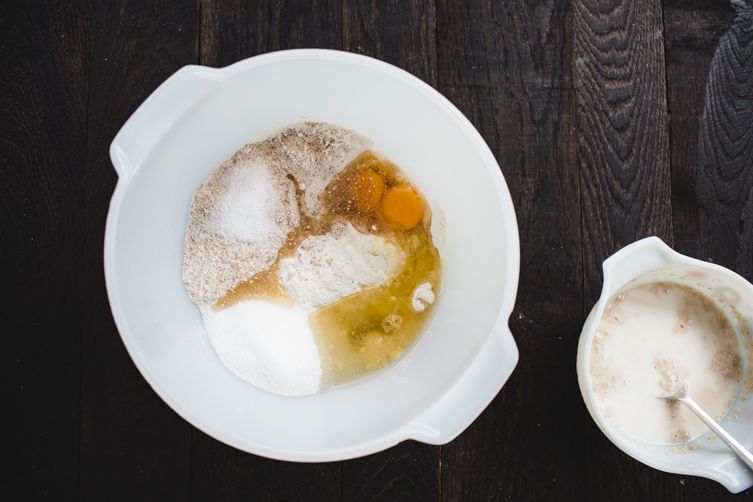 Pour in the milk mixture and, using the dough hook attachment, mix everything together. Let the mixer knead the dough on medium speed for about 10 minutes, until it's smooth and quite sticky. (If you don't have a stand mixer, stir the mixture together with a wooden spoon or your hands until it comes together, then knead it on a lightly floured surface for 10 minutes until smooth.) 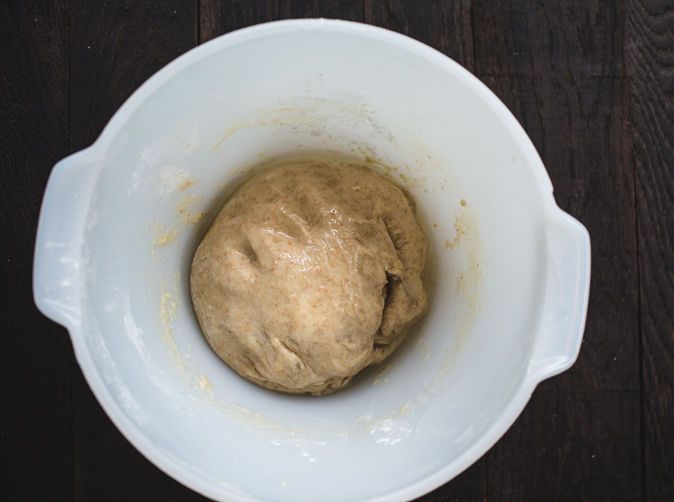 Lift the dough out of the bowl and pour some oil into the bowl to grease it. Place the dough back into the oiled bowl, turning to coat. Cover the dough loosely with plastic wrap, then leave it in a warm place until doubled in size, about 1 to 2 hours. 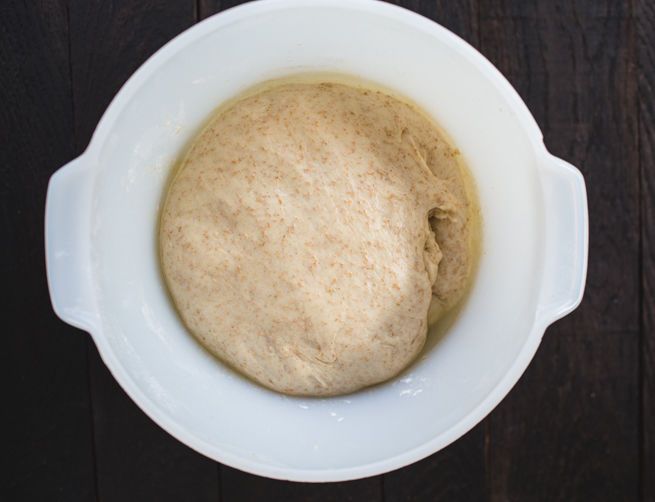 Make the filling: In a small bowl stir together the dark brown sugar, ground cinnamon, and flour. Set aside. 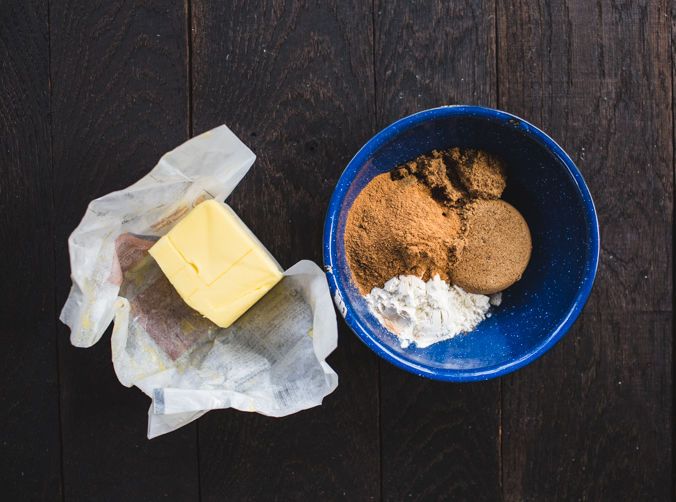 Once risen, turn the dough out onto a lightly floured work surface. Sprinkle it with some more flour, then roll it into a 20- x 12-inch rectangle. 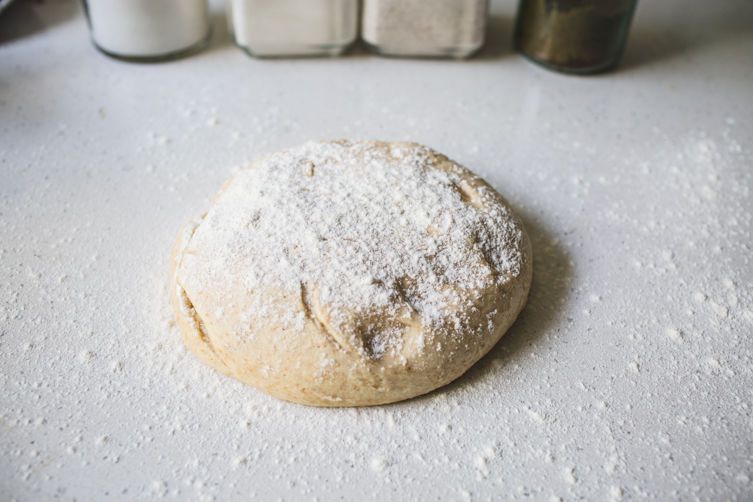 Spread the 1/3 cup of softened butter all over the surface of the dough, and then sprinkle over the cinnamon mixture. 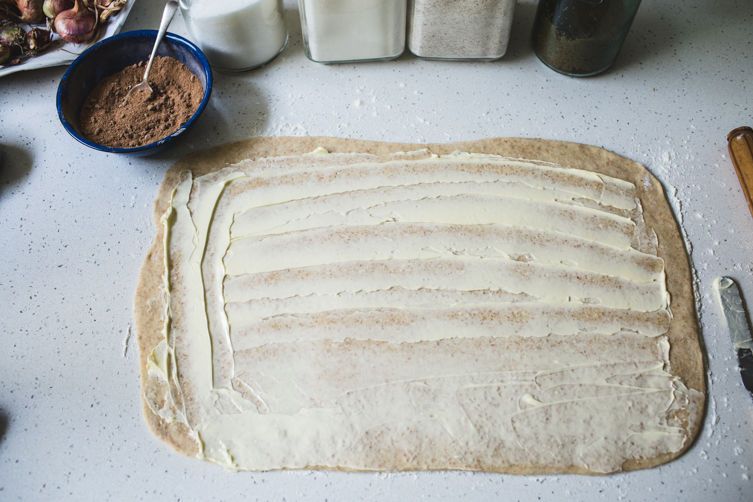 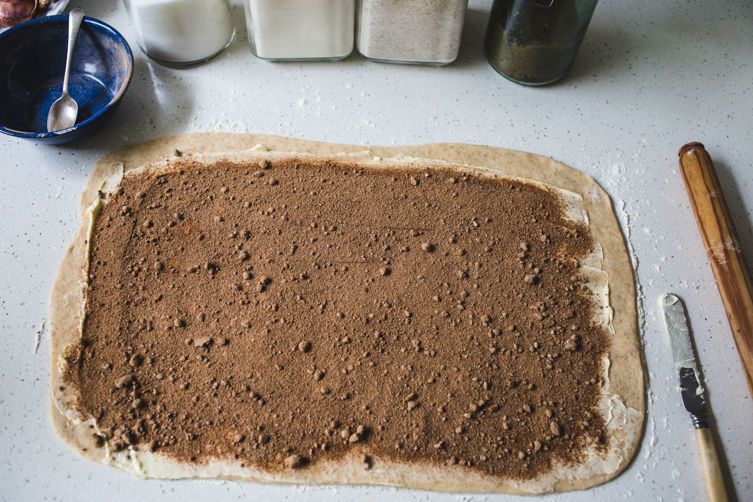 Starting at the long edge (20-inch edge) of the rectangle, roll the dough up tightly into a long log. Cut off the ends so you have a roughly 18-inch log, then score along the dough every 2 inches so that you can see where you'll be cutting to make 9 cinnamon rolls. 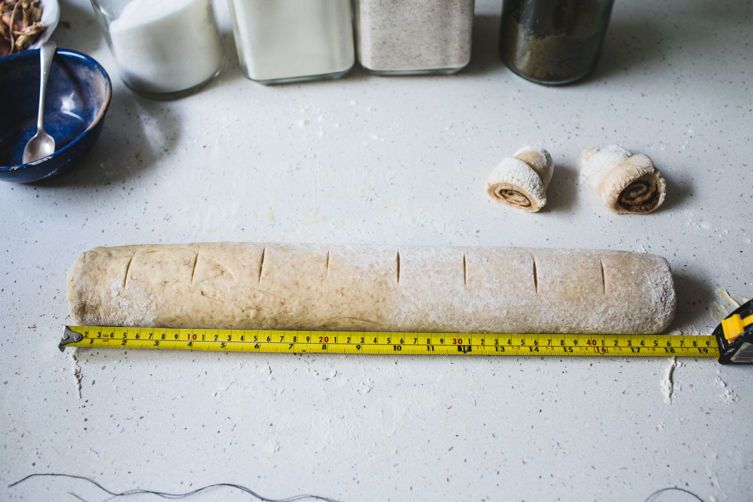 Using either a thread or unflavored dental floss (as shown in the photos) or a sharp knife, cut the dough into 9 pieces. 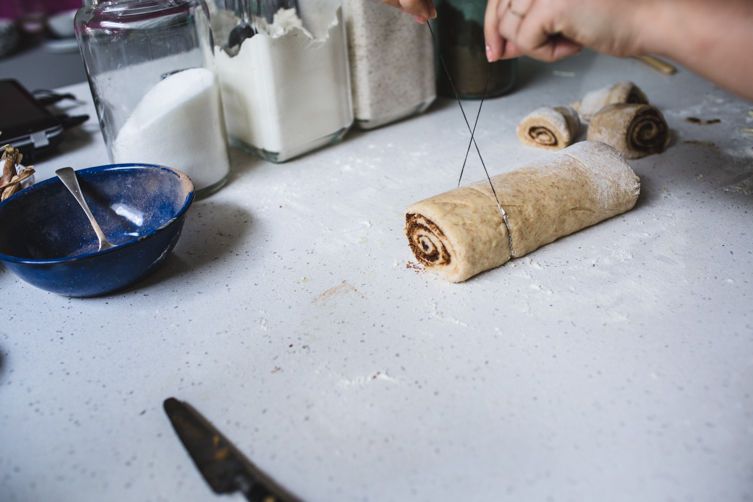 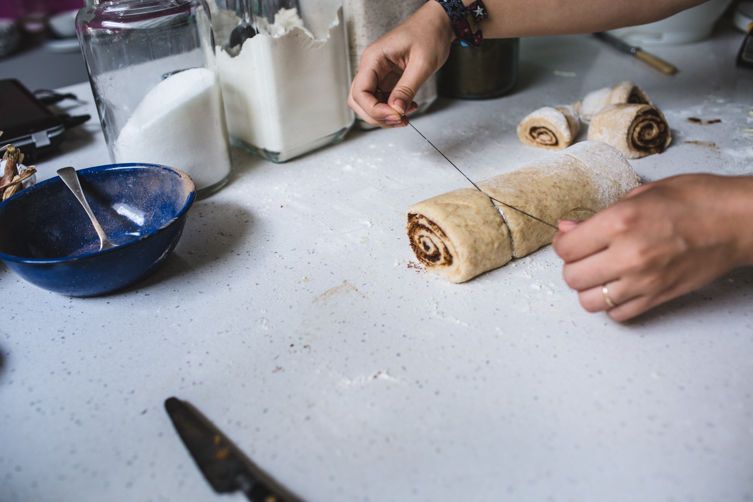 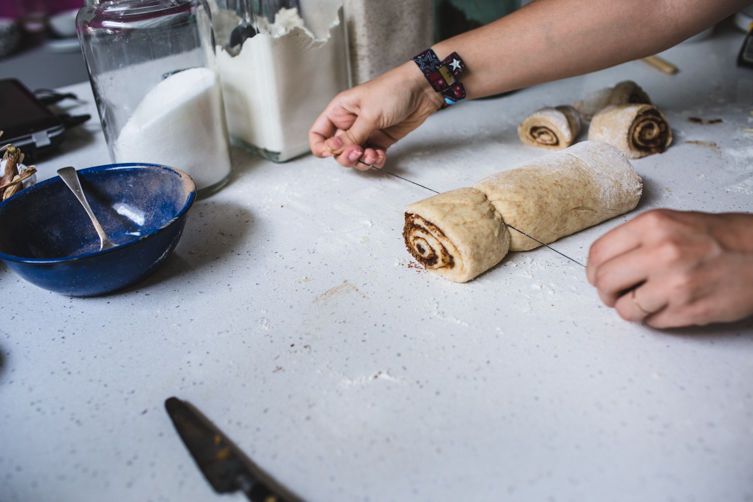 Place the rolls cut side-down into a large greased tray. Cover them loosely with plastic wrap and leave the rolls somewhere warm to rise for 30 minutes. Meanwhile, preheat your oven to 350° F. When the rolls have risen, remove the plastic wrap and bake them for 20 to 30 minutes, until well risen and golden brown. Leave them to cool before frosting. 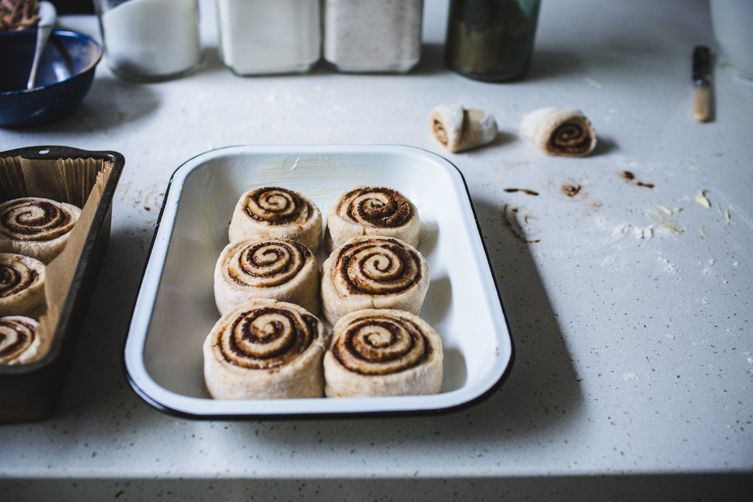 Make the frosting by creaming together the 1/4 cup of softened butter, powdered sugar, cream cheese, and vanilla extract until smooth. Spread the frosting all over the cooled rolls. 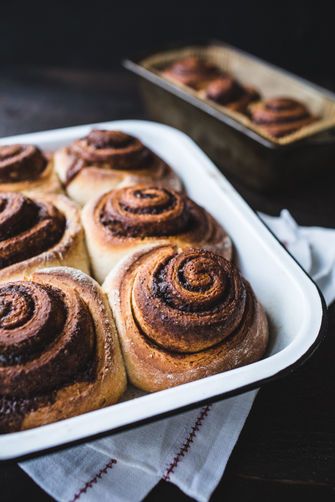 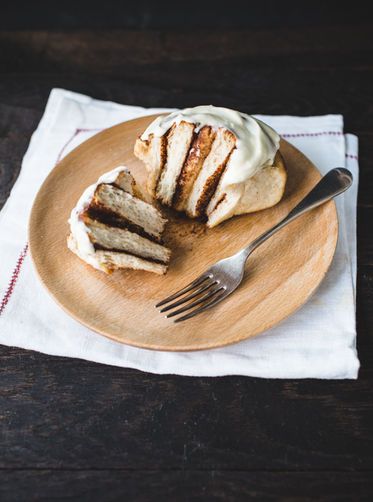 Izy H. December 22, 2014
Boiling water on it's own would but it is mixed with milk first, bringing down the temperature, before adding the yeast

Amy M. December 15, 2014
These are delicious! Love the addition of whole wheat flour. Disagree with previous comment about being less sweet, though. Given the icing, next time I will cut back the amount of sugar in the dough and/or filling. Most sweets are too sweet for me, though. Thanks so much! This one's a keeper.

Elissa December 9, 2014
I'd like to prepare on Christmas Eve and refridgerate to bake in the morning--- any suggestions?

Izy H. December 9, 2014
Once the rolls are shaped and you've placed them into the baking pans, cover loosely with plastic wrap and chill overnight. In the morning remove the plastic wrap - the rolls should be risen and ready to go straight into a preheated oven.

lena16 December 5, 2014
Thanks for the recipe, Izy.
It would be nice to know the size of the baking pans shown on the photo. How large is that loaf pan, for example? And the rectangular pie dish?
Thanks.

Cindy December 1, 2014
Here I go again. I can't wait to make these tomorrow. The beauty for me is the size. Yeah sure, one can half a recipe but all mine make 2 dozen rolls and that is way too much. I'll probably make 8 instead of 9-10 to fit my pan better so they'll be slightly bigger. Christmas is coming, this'll work just fine for me. Fist recipe ever I've seen of cinnamon rolls that produces 9 rolls instead of 24.

AnneD November 30, 2014
I love cinnamon rolls and make them often. Although I have several recipes, I like to try new ones. When I saw the description of "pillowy texture and gooey center coil," I was sold! But this recipe, I'm sorry to say, was not as good as I'd hoped after reading the author's wonderful story.

NBE December 1, 2014
Hi, AnneD. What's your best recipe for cinnamon buns? I love these when they are good!

AnneD December 1, 2014
I'll look thru my file and get back to you. My faves are pretty basic, nothing unusual--sweet dough with egg & butter, and all-purpose unbleached flour (less gluten than bread flour for a more delicate dough). Instead of brushing melted butter on the rolled-out dough, I just spread softened butter right out of the package, which is easy-peasy and allows for a thicker layer. I like to use butters like Plugra, Kerry Gold, and Vermont Cultured Butter from Vermont Butter & Cheese, but when the craving hits on Sunday morning--I use whatever's on hand!

AnneD December 15, 2014
I confess I don't have a "go to" recipe; I keep trying new ones. Have had good results with the "Almost Famous" cinnamon buns at FN; the Epicurious ribbon-winning buns by Molly Wizenberg (Bon Appetit 2008); the orange rolls at kingarthurflour.com (substituting cinnamon filling); Seth Greenberg's dough published at Martha Stewart website (sour cream, vanilla, vinegar!); Schimenti's Sticky Buns from Food & Wine (2010), although the whiskey sauce is not my fave; and a reduced-fat version on foodandwine.com (with cottage cheese and buttermilk), which was surprisingly tender, although I don't make it for parties. For me, cinnamon rolls aren't the place I strive for whole grains and less butter, unless a client requests it.

With this in mind, I serve small cinnamon buns at parties. Guests shy away from large frosted gooey buns--too big a commitment. But they'll happily pick up a little cinnamon bun, and even a second one, with no hesitation.
You know, the more I reflect on it, these DIY cinnamon rolls at Food52 were really very good, and the method was beautifully explained. I think what tripped me up was the so-tantalizing narrative and the superlative praise in the intro -- "perfect." Expectations can be a tricky thing.

Diana Z. November 30, 2014
Always looking fr the perfect cinnamon rolls. Shall test this one AND the dental floss - love that!

Etta November 27, 2014
These are great! Far less sweet than other cinnamon roll recipes I've tried. The dough is super stiff, though. I opted to knead it by had after my KitchenAid started making some worrying, grinding sounds.