Today: Turn cold nights into an excuse to get cozy in the kitchen with a fresh salad and warm pasta. 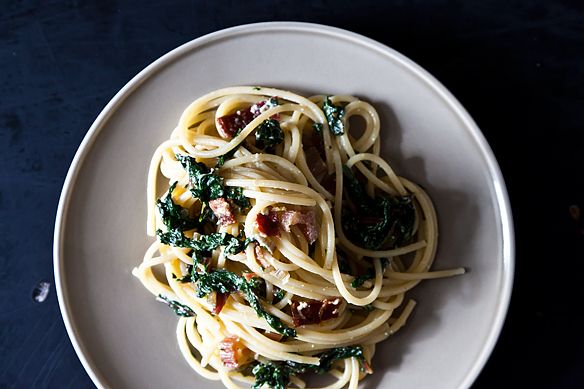 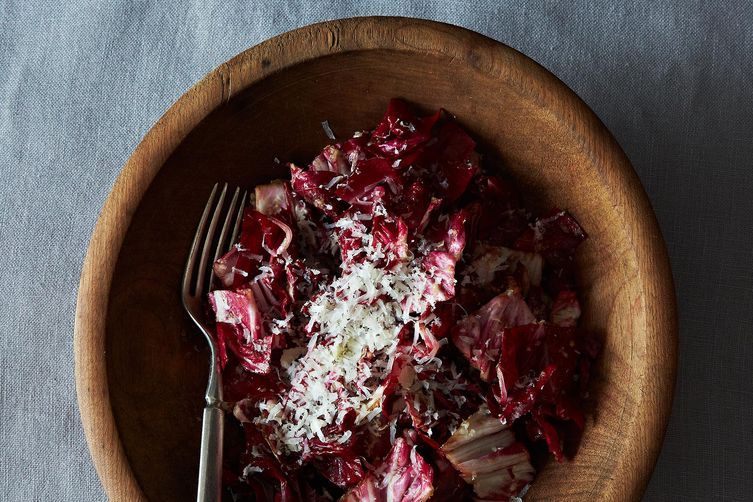 Deciding what to eat for dinner can be a daily struggle -- particularly in the middle of winter when cold evenings make it difficult to muster any energy, let alone creative energy. For these nights, we turn to dinners that only require a quick stop at the store for a fast track to mealtime success.

Aside from its simplicity, this menu is a wintertime go-to for two reasons: pasta and cheese. Sometimes the only way three months of winter -- is it really only three? -- feels manageable is thanks to this dynamic duo. And let's be honest: Who isn't a fan of carb loading and ample cheese consumption as a weeknight meal? Plus, this dinner comes together quickly and even includes a salad -- your mom would be so proud.

Here's how to make it:

Begin by making the salad dressing: In a large bowl, add a 1/4 cup balsamic vinegar and sherry vinegar, and chopped red onion. Break the onion up into pieces so that all of that oniony flavor gets into the vinegar. Let the dressing sit for 1 hour and then strain out the onions. While the it sits, prep the radicchio. Remove the cores from the radicchio and discard, then chop the remainder into 1-inch pieces. Pour 1 gallon of water into a large bowl and add enough ice to make the water icy cold. Once cold, strain out the ice and add the radicchio to the water. (Note: If you don't strain the ice out of the water before adding the radicchio, you'll be picking out ice pieces from the wet salad later.) Let it sit for 15 minutes to remove some of its bitterness, strain, then spin in a salad spinner until dry. Fluff the dried radicchio and start on the pasta.

Blanch the Swiss chard for the pasta: Bring a pot of well-salted water to a boil over high heat. Blanch the chard for 5 minutes, scoop it out of the water, and drain well, squeezing out as much of the water as possible; save the hot water for the pasta. Chop the chard and set it aside, then cook two handfuls of spaghetti noodles in the same pot of boiling water. Follow the directions on the package to cook the spaghetti, then drain and set aside, retaining 1 cup of pasta water.

While the pasta cooks, prep its toppings: Fry the bacon lardons until just crispy, then add the shallot and sauté until soft, adding oil if needed. In a separate bowl, toss the chard well to break up any clumps, then add it to the sauté pan and mix well. Add the cooked spaghetti with increments of pasta water as needed. In a small bowl, combine the ricotta and Parmesan cheeses with zest from half a lemon and pinch of salt and red pepper flakes. Before serving, stir the cheese mixture into the pasta.

To finish up the salad, add the honey and 3/4 cup olive oil to the strained vinegars and whisk. Using your hands, toss the radicchio with the dressing until evenly coated. Add 1 cup of the finely grated Manchego cheese, along with some salt, and toss again.

To serve, sprinkle the remaining 1/2 cup Manchego on top of the salad and plate alongside the pasta.

Click through on the recipe photos or titles to see (and save and print) the full recipes, or take advantage of our handy grocery list below.

We're assuming you have salt, pepper, red pepper flakes, balsamic and sherry vinegar, honey, dried spaghetti noodles, and extra-virgin olive oil. If not, be sure to add those to your list, too.