6 Things We Managed to Learn While Whiskey Tasting

Today: Last week, the Food52 team toured Kings County Distillery, and learned a thing or two in the process. 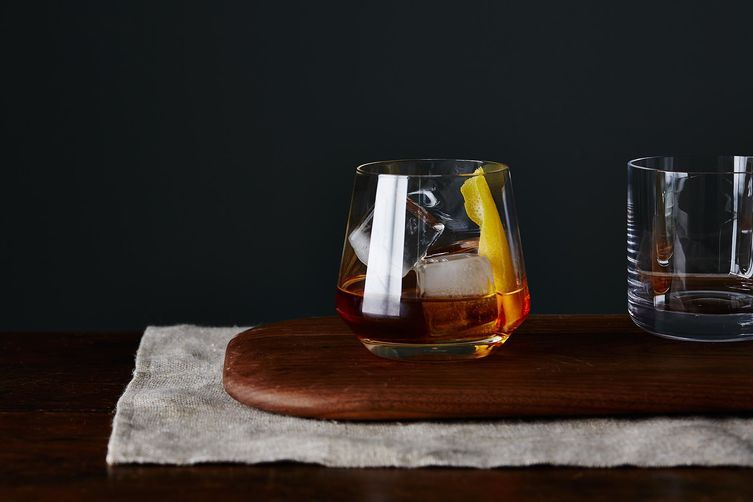 Up until last week, my relationship with whiskey had been limited to my mom's favorite photo-taking demand ("Everybody say 'whiskey!'") and a sorry attempt at an Old Fashioned inspired by a lazy afternoon of binge-watching Mad Men. Now that I think of it, the cocktail I created probably had more sugar in it than it did whiskey, so that I could say I was drinking whiskey without actually having to taste it. I figured that an appreciation of whiskey (along with anchovies, comfortable shoes, and going to bed early) would come to me with age.

Last week, I was given the chance to refine my palate and put a little hair on my chest (in a purely proverbial sense) when the Food52 team toured New York's oldest operating whiskey distillery, Kings County Distillery in Brooklyn. We learned about the history of whiskey, witnessed the process of making it, and I drank more of the spirit than I'd ever had in my life (for a grand total of about four sips). Becca Goldstein, a Whiskey Extraordinaire at Kings County, was our guide. While I can't say it's my new go-to order, or that I'm any closer to become a whiskey sommelier, her are some of my favorite facts I learned from the tour:

1. You can tell a lot about a whiskey's origin from its name.

I want to clear one thing up: Bourbon does not need to be made in Bourbon County, Kentucky for it to technically be a bourbon. Becca explained to us that this is a misnomer. Rather, bourbon is defined as any straight whiskey made from at least 51 percent corn that has been aged in new charred oak barrels in the United States. (Scotch whisky, on the other hand, can be aged in old oak barrels, so many barrels are sent from the United States to Scotland after they have been used to age bourbon.)

More: Interested in learning more about barrel-aged spirits? Let us be your guide.

Did you catch the omission of the "e" in Scotch whisky? This "e" actually indicates the region in which it was produced. As a general rule, American-produced and Irish varieties spell the spirit, "whiskey," while Scotland, Canada, and Japan refer to it as "whisky." In fact, The New York Times updated their style guide in 2009 to reflect this distinction after they experienced a number of objections to using the term "whiskey" universally. 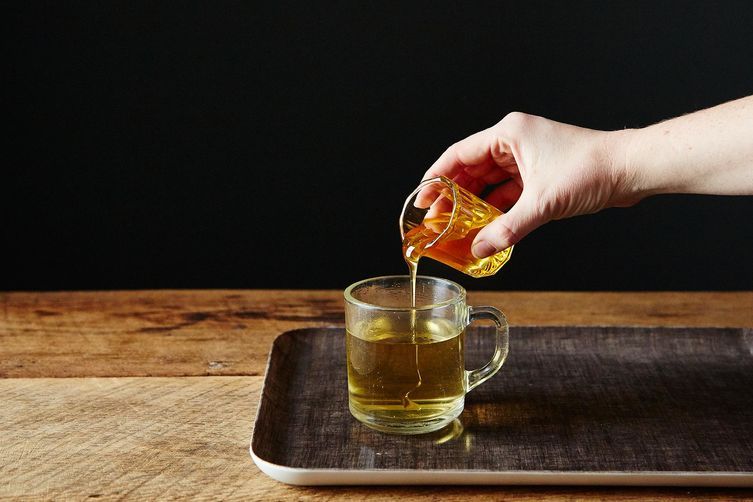 2. There are three steps to tasting whiskey: the nose, palate, and finish.

Once the whiskey has been poured into a proper glass (a snifter or copita glass generally work best), the next step isn't to taste the whiskey, but to "nose" it. During the whiskey tasting dinner I attended after the distillery tour (it was a big day), we were instructed to smell the whiskey to better understand its character. Like wine, whiskey can have a variety of distinct smells from earthy to malty to floral. It's best to serve whiskey neat (without ice) to nose it, as an ice cube can dilute the smell. Adding a drop of water to a young whiskey, on the other hand, can help to open up the smells and taste of the spirit. We were instructed to take a small sip of the whiskey and hold it on our palate for four seconds, then slowly exhale to taste the "finish" (or, in my case, wheez). 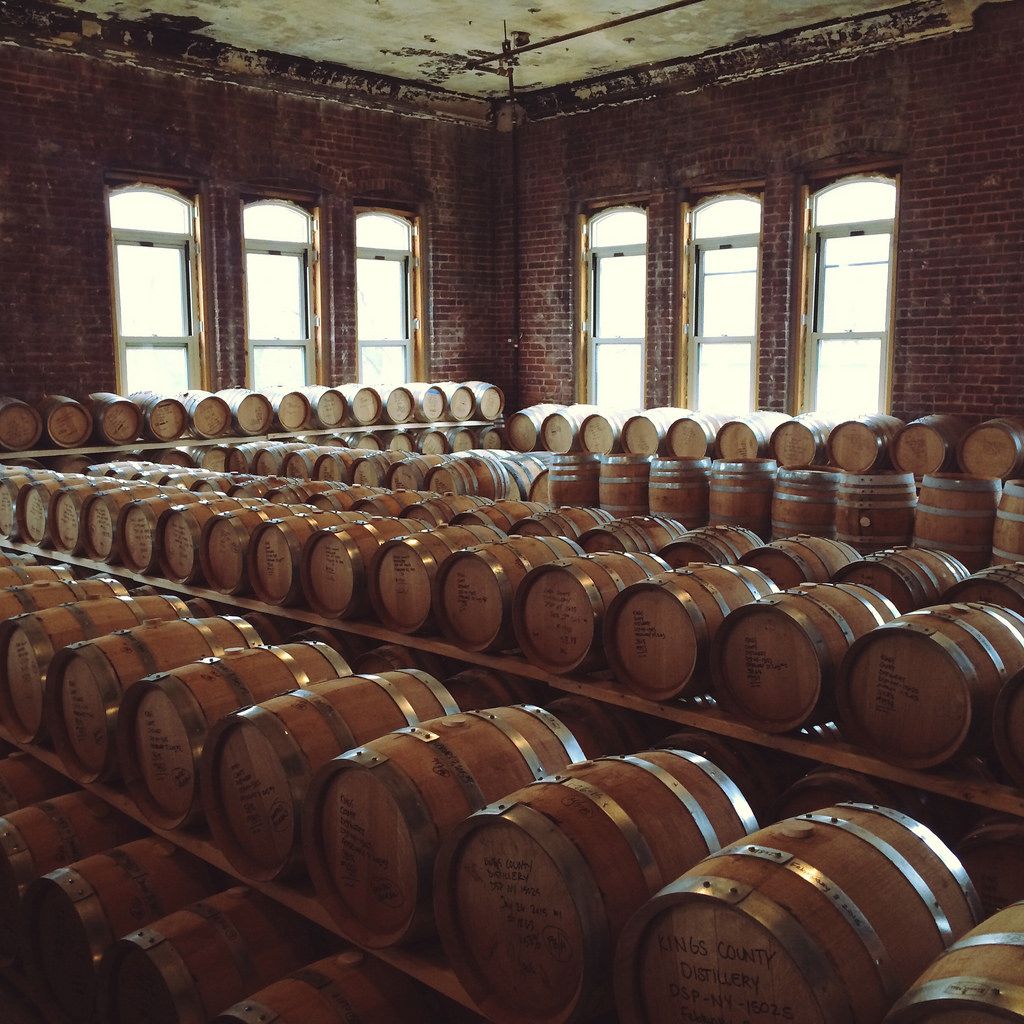 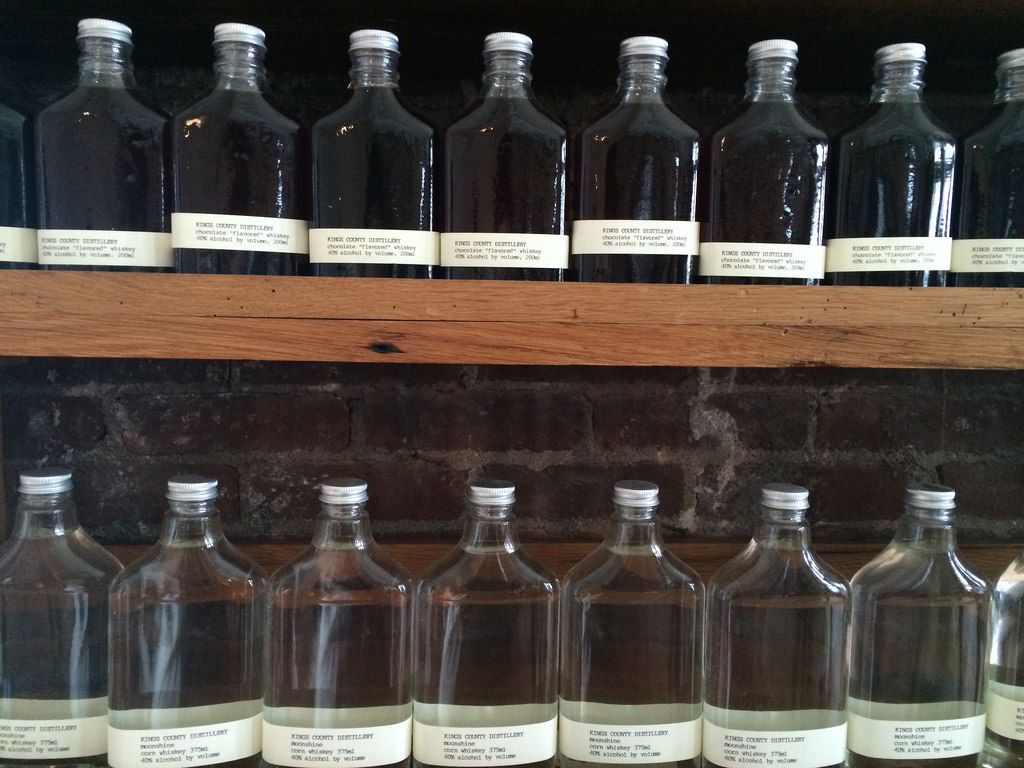 3. While age is the most common measurement of a good whiskey, it isn't necessarily an accurate one.

As we entered the barrel room at Kings County, which contains hundreds of bourbons in the process of aging, Becca explained to us that age is not necessarily the best way to measure a good whiskey. She pointed towards the smaller, 5 gallon-sized barrel as an example. Because the whiskey to surface area ratio is much smaller in smaller barrels, these whiskeys only need to be aged for three years at most, while the large barrels, which contain as much as 53 gallons, are aged for up to twelve years. She added, "There are so many other factors that go into producing spirits: barrel size, mash bill, still style, aging climate. A little bit of research can go a long way when it comes time to pick out a bottle."

4. Single-malt is not necessarily better than blended whiskey.

There's a common misconception that single-malt whiskey is the product of a single barrel, and that it is of a higher quality. However, the "single" part only indicates that the whiskey is the product of one distillery, and is not an indication of the number of grains that went into it. The "malt" part indicates, in Becca's words, "that the majority of the mash bill, meaning the breakdown of grain that goes into your spirit, has gone through the malting process." You've probably heard the term "single-malt Scotch" because single-malts are most common in Scotland, where they are made with malted barely as the base. Becca explained, "American single-malts sometimes use other grains like rye. "Single-barrel whiskeys, on the other hand are, as the name suggests, those that have been aged in one barrel, and are much more common in the United States. 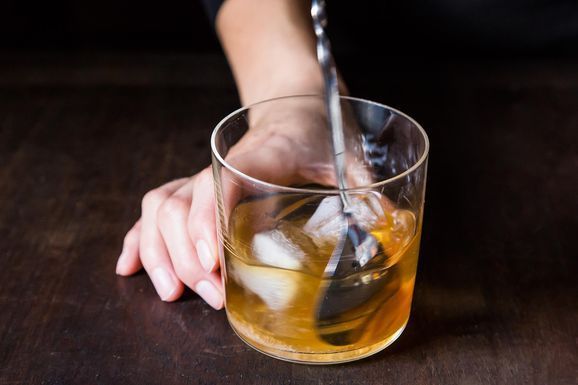 5. Distilleries have played a surprisingly large role in the history of the United States.

This drunkenness—combined with a horrifying food scandal and the 1919 Boston Molasses Disaster, when a distillery's molasses storage tank burst, killing 21 and injuring 150 people—contributed to the Temperance movement which helped lead to Prohibition from 1920 to 1933. Until 13 years ago, the taxes that the government placed on liquor licenses immediately after Prohibition made it nearly impossible for microdistilleries like Kings County to get their start. Under the new law, microdistilleries are able to function under far fewer taxes as long as they source half of their ingredients from New York, explaining the recent boon in such distilleries.

At the end of the tour, Becca set out a number of whiskeys for us try: everything from moonshine (essentially un-aged whiskey) to chocolate bourbon, which is infused with cacao. She encouraged us to take a sip of each one, saying, "When it comes to whiskey, or any spirit for that matter, the best strategy is to constantly try new things. Breaking out of your comfort zone and taking a night off from your usual will help you discover awesome alternatives you never even knew existed."

What are some of your favorite ways to enjoy whiskey? Tell us in the comments below!

Photos of Kings County Distillery by Leslie Stephens; all others by James Ransom

Esteban December 6, 2017
It does not have to be "straight" to be bourbon. "Straight" means it's been aged 2-4 years, so you can have a bourbon that's under 2 years of age and it's still a bourbon, as long as the mash bill is 51% or more corn (with the other 49% being wheat, rye, and malted barley), it it not distilled above 80% ABV, and it is aged in new, charred American oak barrels at no more than 125 proof.

Leslie S. May 13, 2015
It's incredibly alarming! Luckily there are safety measures in place now to avoid repeating such a catastrophe