Beyond the Cover: D.O.M. by Alex Atala

We’ve been told not to judge a book by its cover, but what about its photography, layout, typefaces, paper—and how they all interact with each other? Each week, we’ll be sharing a book spread that’s worth taking a close look at for one reason or another. And we’ll ask you: What do you think about it?

Today: Alex Atala is regarded as one of the world's best chefs, yet through the design of his book, it's clear he wants our focus to be on his food. 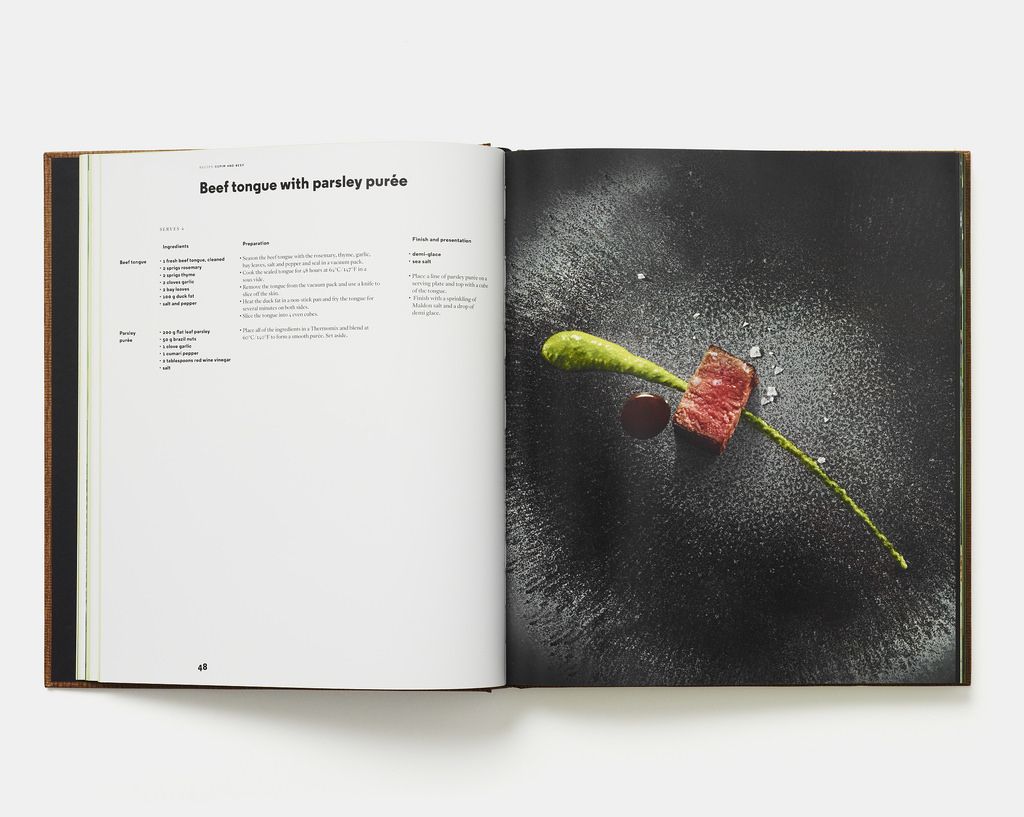 The year D.O.M. was published, its author, Alex Atala, was the only chef to be included on Time magazine's list of the 100 most influential people in the world. Alex Atala is big time—he's allowed to show off a bit—so he could've himself been the focus of the book. There could've been some pictures of him in his São Paulo restaurant kitchen, eating with buddies David Chang or René Redzepi, or wandering through the Brazilian rainforests foraging his own ingredients. While the book does have gorgeous environmental photography, it is not about Atala—it's about the food he has created. Even if many of the recipes are too high-end for us to ever make, we're given clues that this is the intention through several of the book's design elements. For example, take the spread above for the recipe for beef tongue with parsley purée:

Does this approach—letting the food speak for itself—make you want to make a recipe more? What parts of this design stand out to you?

Brian G. April 25, 2015
All designs have their place; the book definitely fits Atala's style. One of my favorite food-inspired books "A Day at El Bulli" has almost no recipes in it (and even fewer that you can even make at home) but it's still chock full of beautiful photography and stories. I do appreciate minimalism though and this book definitely caught my eye.

AntoniaJames April 24, 2015
Thought of you, Ali, when I saw this recently: http://www.condenaststore.com/-sp/Vinnie-we-gotta-talk-about-what-bookmaking-means-New-Yorker-Cartoon-Prints_i13368591_.htm ;o)

AntoniaJames April 24, 2015
All about the food, and nothing but the food: Yes, thank you.

No photos of the author and his friends, pets, favorite beach, etc.: Yes, thank you.

Efficiently drafted recipe that's to the point, with nothing extraneous: Yes, thank you.

No headnotes: Yes, thank you.