This Cake Will Make You Re-think Your Plans

Today: Sometimes a cake doesn't go as planned, and sometimes it's better for it. 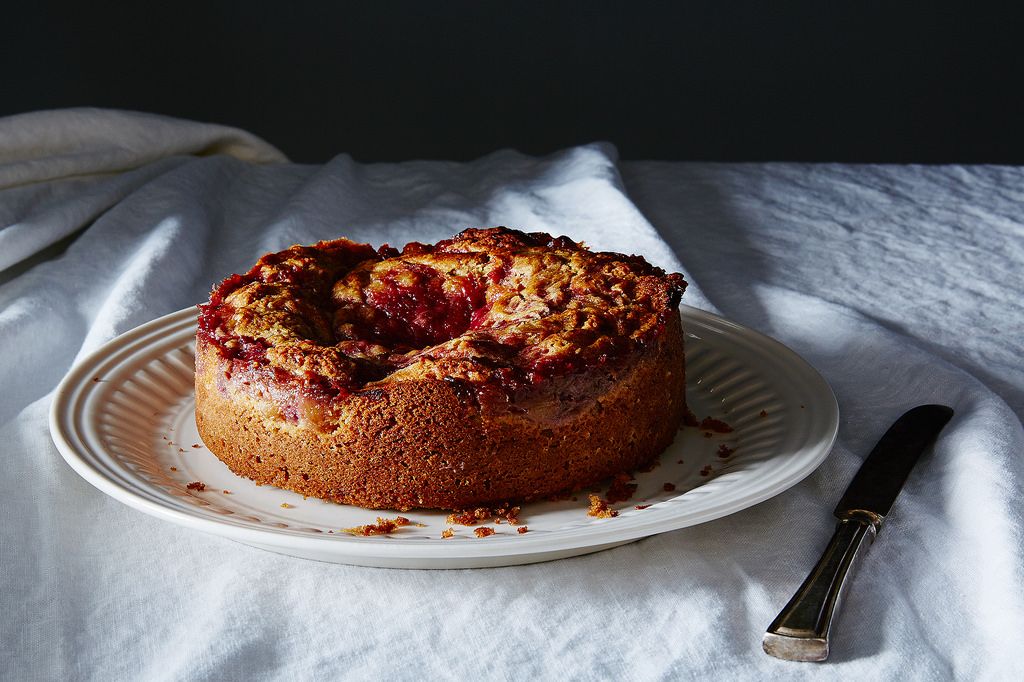 No one has ever accused me of having trouble committing. I stick with books and friends and foods, probably to a fault (see the condensed milk that's been in the fridge since July and the copy of Beloved that has a handwritten annotation for every printed word).

But the same isn't true when it comes to recipes. For every ten I declare I'll make, I see one through to completion. I always find an excuse to make something other than what I planned: I'm too hungry to wait for beans to cook; I'm too clean to deep-fry; I'm too concerned about the state of my finances to splurge on saffron. Because I'm still trying to figure out the limits of my kitchen, my budget, my energy, and my ability, recipes only become reality when the stars align—when I already have eighty-five percent of the ingredients and I'm in the mood for that particular dish and I promised to make it for someone who happens to be passing through town.

And this applies to cake, as well. The recipes I've been meaning to try live in eternally-open tabs on my browser, in photos of book spreads on my phone, in a cluttered Word document titled "RECIPE INSPIRATION!" that I'm too scared to open. So when it's time to actually bake, I ignore what I've been meaning to test and go with what's right in front of me. 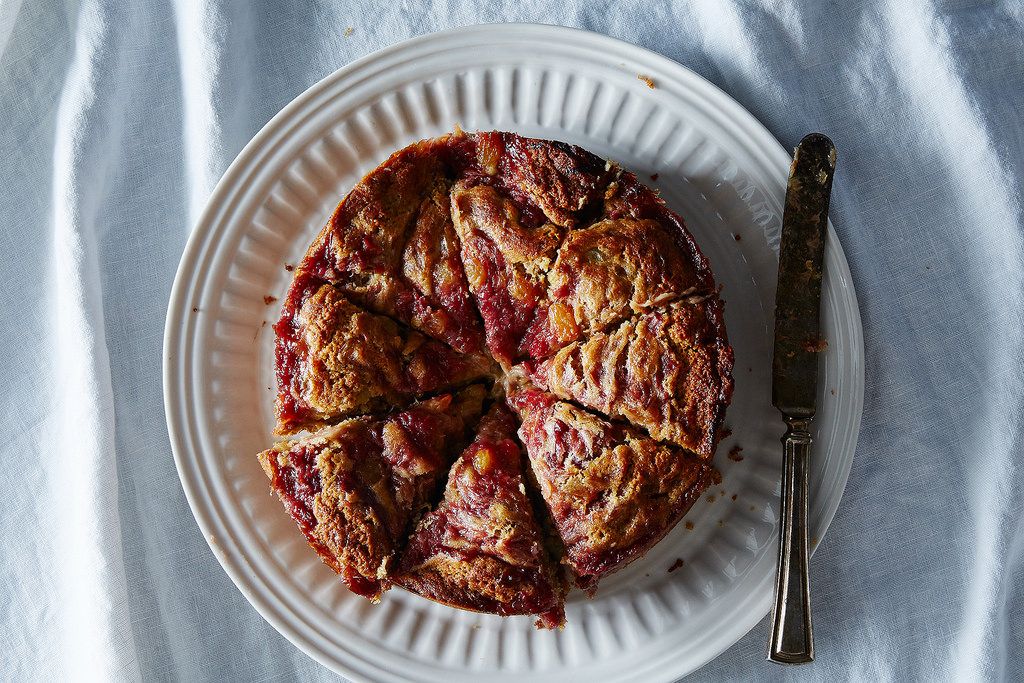 For this cake, that meant rhubarb. I had taken it home from the office a couple of days earlier and was excited about finally being able to bake with a non-frozen, non-citrus, non-apple fruit. I marked four or five different rhubarb cake recipes and ruminated.

I decided to try a cake with rye flour because I was curious to use it in a dessert, because the words "rhubarb" and "rye" sound so beautiful together, and because I had bookmarked this recipe in Bon Appétit months earlier. I decided to make a compote of the rhubarb before adding it to the cake because I was inspired by this recipe for Rhubarb Pudding Cake, and to that, I decided to add orange zest and juice because rhubarb's sharpness reminds me of cranberries', and white wine because I thought it would be more interesting than water (and because there was a half-empty bottle in my fridge). I threw in a handful of raisins because I love to watch them swell with liquid like little water balloons.

I plopped the rhubarb compote onto the rye cake batter and swirled it in messily because I'm moving and there were boxes to pack and floors to sweep. For all of my improvisation, the cake came out of the oven light and moist, tasting simultaneously like the holidays and like springtime, with the rye flour adding an earthy warmth that made me glad I hadn't added any spices. It also made me glad that not everything has a plan. 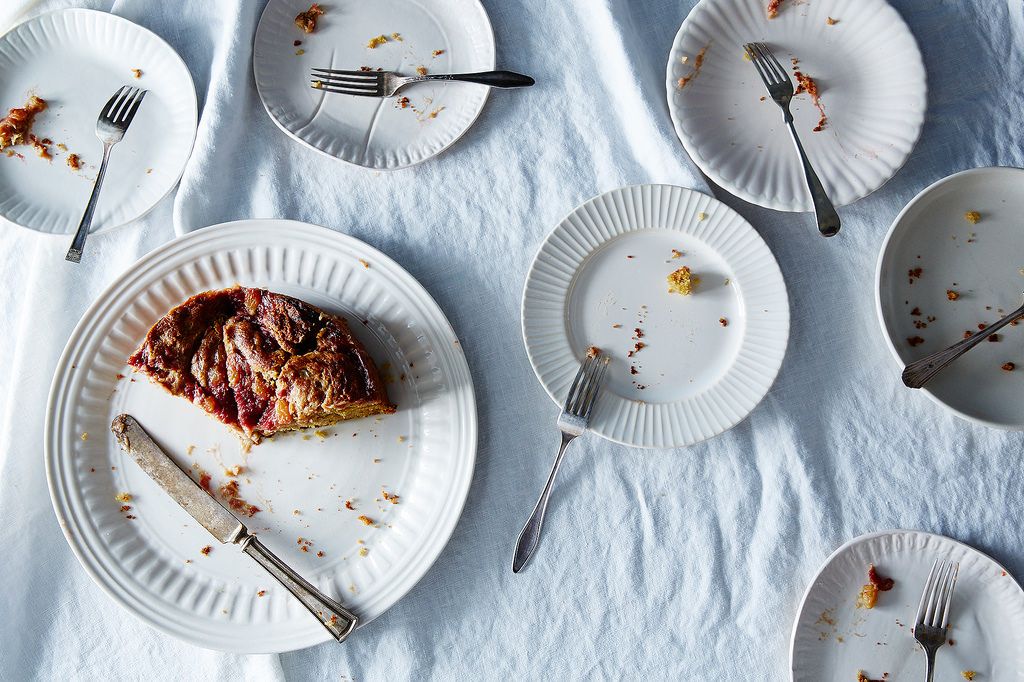 A note on the rhubarb compote: When I first made this at home, I cut the rhubarb stalks into 1/4- to 1/2-inch chunks and cooked the compote for 15 to 20 minutes, uncovered, so that most of the liquid evaporated. The texture was more jammy than soupy—it was thick and I had to rap the spoon with some force to transfer it onto the cake batter. If your compote is much more liquidy, you might not want to use all of it on the cake—the excess moisture might make your cake gooey on the inside (which is delicious, but not to everyone's taste).

For the rhubarb compote:

How do you manage to make the recipes you were planning on? Do you allow for improvisation or you do plan a week in advance? Share with us in the comments.

ana August 14, 2015
Sarah, would this cake work with something other than rhubarb? Let me know. Thank you.

Sarah J. August 15, 2015
I think many/most summer fruits would work well, particularly stone fruits! You'll have to adjust how much liquid you add to the compote—you want to make sure that it's not at all liquidy or your cake will be very gooey and it won't cook through. I'd suggest straining the compote if it still seems very liquidy after you've cooked it down.

PRST June 18, 2015
Oh... I see that the pan size and type has been updated since I first copied the recipe. One problem solved. Wondering if you made the cake using the weight measurements as opposed to cup measurement for both flours and if you actually measured the rhubarb.

Sarah J. June 18, 2015
I used the weight measurements, but I checked them against the cup measurements while baking! I can go back and double-check ASAP.

PRST June 18, 2015
I consider myself a good baker and this, unfortunately and disappointingly, was a total failure. I used the weight measurement for both the compote and the cake. Using two pounds of rhubarb made enough compote for 3 cakes in my opinion. It was watery and the rhubarb was mush. I cooked it exactly as directed and wound up improvising to make a compote that I thought had the correct consistency for the cake. Sarah could you tell me what size pieces you cut the rhubarb in? I used very fresh rhubarb and it became soft after 5 minutes of cooking. Now as to the cake- an 8 inch cake pan is far to small for the amount of batter. My cake pan is a professional one with 2 inch deep sides. My first inclination was to use a spring form pan and I wish I had. The cake is in the oven now, spilling out all over the oven bottom. Smoke is clouding my kitchen from the batter dripping and burning on the oven bottom. UGH. Sarah, I'm wondering about the weight measurements for the flour and the rhubarb... are they your calculations? I highly recommend a larger pan size for this if anyone attempts making it. Too bad.

Sarah J. June 18, 2015
Oh I'm so sorry to hear this, PRST. I've made the cake multiple times, but this makes me want to get back in the kitchen and make it again. I will certainly report back ASAP. I did weigh the flour and the rhubarb myself, as I generally use a scale when I'm baking. Was your compote thick and not at all watery? I cut the rhubarb into 1/4-inch cubes (not tiny!)—I will specify that in the recipe—and I cook it down until there's almost no liquid left.

Joan May 26, 2015
You must be my Sister from another Mister!!
I felt like I was reading a biography....
But, you forgot about the file folders and loose leafs of printed out recipes(from before I learned how to set up a recipe file on my computer)
I will definitely try this because I have all the ingredients ....except for the rhubarb.
But for now...this is going into my "save"folder :)

marianne May 23, 2015
With my experience I generally cut all sugar in half and always come out successful. I have not tried this but I will in the near future.

Lynn R. May 23, 2015
If you can't have the wine, what liquid would you suggest replacing it with?

Rachel P. May 23, 2015
You need the sugar to counter the tartness of the rhubarb!

Sarah J. May 9, 2015
You can click on the images or "See the full recipe (and save and print it) here." Any of those links will take you to the recipe page, where you will be able to print.

Marjamina May 23, 2015
First, establish an account. Second, sign in. Next, look just above the picture a slightly to the left of it to find the print icon. That's what worked for me.

Ali S. May 7, 2015
A good reminder that you don't always have to cling too tightly to recipes—even when baking.

Greenstuff May 7, 2015
Rye and rhubarb seem like a good match. Here's a link to Food52's past effort, a strawberry rhubarb rye shortcake https://food52.com/blog/10206-rye-shortcakes-with-roasted-strawberries-and-rhubarb

Nicole H. May 7, 2015
Sounds great! But it's not exactly something I can just whip up. I never have turbinado sugar, rye flour, or rhubarb just lying around.